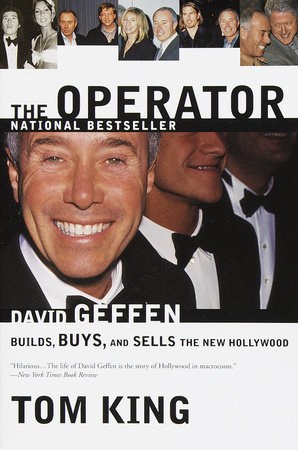 
Complex, contentious, and blessed with the perfect-pitch ability to find the next big talent, David Geffen has shaped American popular culture and transformed the way Hollywood does business. His dazzling career has included the roles of power agent, record-industry mogul, Broadway producer, and billionaire Hollywood studio founder–but from the beginning his accomplishments have been shadowed by the ruthlessness with which he has pursued fame, money, and power. With The Operator, Tom King–who interviewed Geffen for the book and had unimpeded access to his circle of intimates–presents a mesmerizing chronicle of Geffen’s meteoric rise from the mailroom at William Morris, as well as a captivating tour of thirty sizzling years of Hollywood history. Drawing on the recollections of celebrities such as Tom Cruise, Yoko Ono, Warren Beatty, Courtney Love, Paul Simon, and even Cher (whom Geffen nearly married), The Operator transports readers to a world that is as ruthless as it is dazzling, revealing a great American story about success and the bargains made for it.

“A detailed portrait of Hollywood’s premier manipulator…The Operator is as much a composite portrait of the ‘New Hollywood’ as it is of the fifty-seven-year-old partner in DreamWorks SKG.” –San Francisco Chronicle

“Illuminating…[The Operator] shows how raging ambition and chutzpah are as much valued as talent–or more so–in determining success.” –Philadelphia Inquirer

Tom King has been a reporter at The Wall Street Journal since 1989 and has reported on the entertainment industry from the paper’s Los Angeles bureau since 1991.

Geffen told Cher about the sexual encounters he had had with men and how he was struggling with his sexual identity. He hastily added that his relationships with men had been about sex and nothing more. He was afraid of the opposite sex, he told her, but said that he believed a relationship with a woman would offer him the best chance to find true love. Cher had been surrounded by gay men her entire professional life, and Geffen’s confessions left her unfazed.

"What is it that you do?" Cher finally asked Geffen.
"I am the chairman of Elektra/Asylum Records," he told her.
"Oh, well, you don’t look like it," she said. "You look just like a little schlepper."

Geffen was charming, offsetting his usual braggadocio with vulnerability. The two stayed up well into the night, exchanging the stories of their lives. Geffen told her he had become a millionaire more than five years earlier. He told her that he thought he had accomplished everything he wanted to achieve, but that somehow the fame and the money was unfulfilling.

"I’m not alone anymore," Cher thought to herself. She had never known anyone in her life who made her feel so comfortable.

During his therapy session the next day, Geffen made a startling admission to Dr. Grotjahn. "I think I’m in love with Cher," he said.