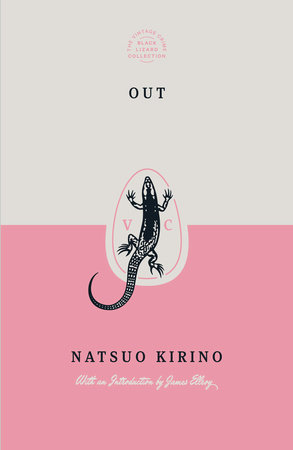 “A nervy thriller. . . . Out has the force of a juicy tabloid scandal. . . . A potent cocktail of urban blight, perverse feminism and vigilante justice.” —The New York Times Book Review

The introduction, discussion questions, suggestions for further reading, and author biography that follow are designed to enhance your group’s exploration of Out, a daring and disturbing psychological thriller set in contemporary Japan. Written by Natsuo Kirino, one of Japan’s most popular writers, Out won Japan’s Grand Prix for Crime Fiction and was an Edgar Award Finalist for Best Mystery Novel in the United States.

In the dreary, exhausting hours of the nightshift at a boxed-lunch factory, four women have formed a friendship of sorts. They work side by side and chat briefly each night, always carefully guarding their troubling thoughts and personal worries. When Yayoi Yamamoto, a young wife and mother, kills her abusive husband, the others help her dispose of the body; however, they become bound to one another in an ever tightening web of conspiratorial intimacy, mutual suspicion, and protective self-interest.

Yayoi had been deeply in love when she married the attractive, attentive Kenji, but his careless cruelty and reckless gambling have left her angry and embittered. Her coworkers at the factory are trapped by their own economic difficulties and emotional isolation. Yoshie Azuma, a widow, is burdened with a demanding, bedridden mother-in-law and two promiscuous daughters. Kuniko Jonouchi, a self-absorbed woman addicted to expensive clothes and make-up, is deeply in debt to an unsavory loan shark. Masako Katori has perfected a cool, competent façade that conceals a deep despair about her lot in life and her increasing alienation from a preoccupied husband and a teenage son who has not spoken for more than a year. The first person Yayoi turns to after the murder, Masako efficiently devises a plan for erasing all evidence of the crime. After a brief investigation of Yayoi and her friends, the police arrest Satake, a sociopathic ex-convict known to have a grudge against Kenji. The women seem to be in the clear—until Satake resolves to take revenge for his false arrest and pinpoints the vulnerabilities that will allow him to conquer and destroy the women, one by one.

Gritty, shocking, and suspenseful, Out is an audacious look at lives marginalized by society and the desperation that drives ordinary people to commit acts of unthinkable violence.

1. Masako believes that she “did her best to live her life according to reason and common sense” [p. 7]. Is her decision to work at a low-paying factory job based solely on common sense? What other motivations does she have for working at the factory? What psychological needs does the job fulfill? In what ways is the choice a reaction to her experiences in her previous job at an upscale credit and loan company?

2. Kuniko wishes “she were a different woman, living a different life, in a different place, with a different man” [p.15]. Yoshie “had wrapped up everything personal that mattered in a tight package . . . and in its place she had developed a single obsession: diligence. This was her trick for getting by” [p. 23]. What do these descriptions convey about how each woman deals with life’s realities? Are their approaches typical of women of their respective ages? Is there a common thread between them?

3. How does Kirino make the friendship among the four women, so very different in age and character, believable? How do the women’s perceptions of one another differ from the way they perceive themselves? What literary devices does Kirino use to bring this difference to light?

4. What finally gives Yayoi the strength and resolve to kill Kenji? Has she simply been pushed over the edge? How does the realization that she hates Kenji [p. 44] affect her? Does giving a name to her emotions make it easier for her to act?

5. Masako and Yayoi discuss getting rid of the body in a calm, collected manner [pp. 49–55]. Why do you think the author chose this tone? What impact does it have on the reader? Does it distance you from the characters—or subtly draw you into the conspiracy?

6. Each of the women finds a way to justify her participation in the grisly task of hiding Yayoi’s crime. Are Yoshie and Kuniko simply seduced by the promise of money, or are their reasons for participating more complicated? What does Masako discover about herself as she organizes the cover-up?

7. A series of careless mistakes and coincidences expose the group to dangers they could not have foreseen. In what ways do their individual flaws and weaknesses contribute to their difficulties? Do their admirable qualities—Masako’s intelligence and her strength as a leader, and Yoshie’s loyal, trusting nature, for example—also play a part in their downfall?

8. As a young man, Satake committed a crime so horrible that even his fellow gang members were shocked [p. 38]. His personal reaction has shaped his life ever since, cutting him off from his own emotions and isolating him from other people. How does Kirino humanize him and move beyond a stereotyped portrait of sociopath to present a character that engages the reader’s interest, and perhaps even elicits sympathy?

9. There are two major secondary characters in Out: Anna, who loves Satake, and Kazuo, the Brazilian factory worker infatuated with Masako. Do they see something that the other characters, including Satake and Masako themselves, cannot see? Is it significant that both of them are émigrés, raised in non-Japanese traditions?

10. Why does Kirino present the climactic confrontation between Masako and Satake from both their points of view? What does this dual perspective reveal about the psychology of violence?

11. Throughout the book, people are struck by Masako’s coldness and the darkness that seems to surround her. Does the final scene offer satisfactory answers to the puzzle?

12. Kirino draws a grim picture of life in contemporary Japan. How are the points she makes unique to Japanese society? Are there any parallels to American society?

13. In an interview, Kirino remarked, “I don’t think I exclusively tell stories of women criminals. However, being a woman in this society is mainly an anonymous existence. I don’t think the fact that . . . women are nameless and overlooked is a good thing. [JapaneseReview.Net]. Would you characterize Out as a feminist novel?

14. Are the graphic descriptions of dismemberment and sex in Out excessive? Are they included merely to shock the reader, or are they essential to the plot and our understanding of the characters?

15. What is the significance of the novel’s title? In addition to escaping detection, how does the need to get out apply to Masako and the others? Which of the characters succeeds?

Natsuo Kirino is the author of more than forty books. In addition to winning the Grand Prix for Crime Fiction for Out, she received one of Japan’s highest literary awards, the Naoki Prize, for Soft Cheeks. Several of her books have been made into popular movies in Japan. Out is the first of her novels to appear in English.

The Genius
Back to Top