An Absence So Great Reader’s Guide 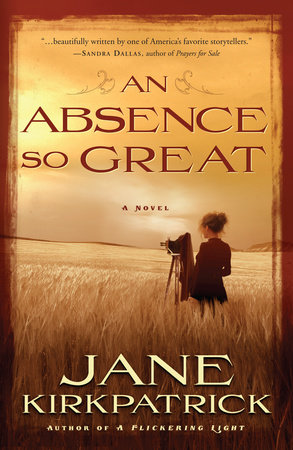 An Absence So Great Reader’s Guide

By appointment, the author is available for phone interviews with book groups. Visit www.jkbooks.com to arrange a thirty-minute conversation with Jane.

1. This book is titled An Absence So Great. What were the absences revealed in this story? How did each character attempt to fill the void? What worked? What didn’t work?

2. How would you describe Jessie Gaebele’s efforts to be anvindependent woman working in a profession that largely excluded women in the early twentieth century? Do businesswomen today face similar challenges? How have things changed, and what has remained the same?

3. What kind of isolating experiences did Jessie Gaebele impose upon herself while in Milwaukee and Eau Claire, and even in Winona when she had her own studio? Did she rebuild those barriers in Bismarck, or did she learn from her experiences?

4. How would you respond to Mrs. Bauer’s remark: “Maybe that was the way for women: having time without a man around offered relief, but they didn’t ever dare say so, not even to themselves, for fear the thought violated heavenly law”?

5. Do you think Jessie overreacted when she learned of ways Fred hoped to advance her career, to be helpful, as he put it? If talent is in part a currency meant to be invested, how did each of the characters invest their talents? Did Jessie misuse the “credit” and “meaningful deposit relationships” she’d established in her life? How else might she have handled the men who offered to assist her?

6. What did each of the main characters want? Why is it so difficult for us to name our desires? What did you think about Jessie’s reliance on the proverb, “Desire accomplished is sweet to the soul”? What does that proverb mean to you?

7. How would you characterize Fred Bauer? Was he unfaithful? Was Mrs. Bauer unfaithful to her vows? Was Jessie? How does emotional infidelity affect a relationship? What actions did the characters take to find new directions? Were they successful?

8. Virginia Butler says, “It’s human nature to mistrust goodness. Part of our exile from Eden, I suspect. We have to be vigilant in remembering that we all mess up our houses. And with grace we’re allowed to straighten things up once again.” Do you agree with Virginia? Why or why not? Have you mistrusted goodness? Messed things up in your life? What brought you through to “straighten things up once again”?

9. On top of the Missouri bluffs, Jessie says, “Unless she saw self-pity and envy and despair as acts of willfulness, she’d always feel set apart, never have the Guide she sought.” What do you think Jessie means? What sorts of acts keep us from spiritual wholeness? Is the trail back to wholeness from self-pity and envy different from the way back from other hurtful and self-destructive decisions we make in our lives?

10. The author told this story through Selma’s letters, through Jessie’s photographs and her commentary about them, and through the third-person narratives of Jessie, Fred, and Mrs. Bauer. How did each of these elements move the story forward, or did they? Did you find that the letters or photographic commentary distracted from or enhanced the narrative? Did you see things revealed in the photographs that Jessie missed in her telling?

11. When preparing to write this book, the author said her purpose was to prove that “accepting the gift of forgiveness
is the hardest yet most meaningful work of the human spirit.” Did she accomplish her aim? Why or why not?

Learn More About An Absence So Great
print

The Stone that the Builder Refused
Madison Smartt Bell

Disaster Was My God
Bruce Duffy

The Better Angels of Our Nature
S. C. Gylanders

The Rose of Sebastopol
Katharine McMahon

The Other Einstein
Marie Benedict
Back to Top