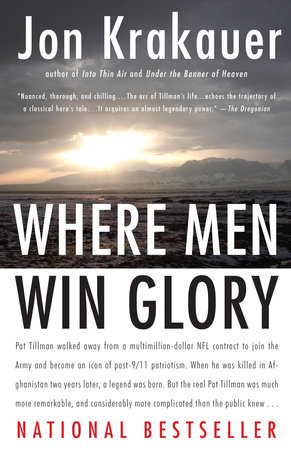 The introduction, discussion questions, and suggested further reading that follow are designed to enhance your group’s discussion of Where Men Win Glory, the new book by Jon Krakauer, bestselling author of Into Thin Air and Under the Banner of Heaven.

Written with Jon Krakauer’s trademark precision, insight, and narrative intensity, Where Men Win Glory gives readers the full story—deliberately suppressed or obscured until now—of Pat Tillman’s remarkable life and tragic death. The book goes far beyond an account of how Tillman was killed. It is a fine biography of his entire life, illuminating a man whose depth and complexity belied his age and his status as a rising star in the NFL, also offering a concise and disturbing history of the United States’ long involvement in Afghanistan, and a searing indictment of the Bush administration’s handling of the wars in the Middle East.

By choosing to cover all of Tillman’s life, rather than only his Army career or his football stardom, Krakauer enables readers to fully grasp what an extraordinary young man he was. From an early age, Tillman demonstrated exceptional athletic ability, though his middle school coaches told him he was too small for football, a warning he would hear—and ignore—throughout his career. But he also possessed of a remarkable personal code of ethics, a code that compelled him to strive to improve himself, to act with integrity and honesty in all aspects of his life, to defend his honor and protect those he loved. He was an idealist by nature and was as empathic as he was aggressively competitive. At one point he writes in his diary: “I can’t even be an asshole to someone anymore without feeling bad. I’m too conscious of their feelings” [p. 40]. But his personal code would turn out to be both an enormous strength, allowing him to find his own path regardless of what others thought he should do, and an Achilles’ heel that would lead him to turn his back on a lucrative NFL career, enlist in the Army Rangers, and willingly place himself in grave danger.

Where Men Win Glory draws on Tillman’s own journals, his mother Mary Tillman’s memoir, Boots on the Ground by Dusk, as well as interviews with Tillman’s wife Marie, his friends, family, classmates, fellow soldiers, teammates and coaches. It gives readers a rare window into the mind and heart of an exceptional American. It offers as well a harrowing glimpse of the military and political dysfunction that so often leads to tragedy.

2. After Tillman died, a copy of Jon Krakauer’s Eiger Dreams, a book about eccentric mountain climbers, was found in his backpack. He had also read and admired Into the Wild and Under the Banner of Heaven. Why would Tillman be drawn to Krakauer’s writing? Why would Krakauer be drawn to write about Pat Tillman?

3. What made Tillman such an unusual football player, both on and off the field? What stereotypes did he defy and transcend?

4. What are Pat Tillman’s most admirable qualities?

5. In what ways did Tillman’s time in jail change him?

6. What role did Tillman’s idealism and personal code of ethics play in his death? Is Krakauer right in suggesting that it was Tillman’s “stubborn idealism—his insistence on trying to do the right thing” [p. 406344] that brought him down?

7. Krakauer writes that “The juxtaposition of Pat’s vulnerability with his fearlessness and self-assurance is not an easy thing to wrap one’s mind around, but it was an absolutely central aspect of his personality” [p. 7363]. What instances in Tillman’s life reveal this unlikely combination of character traits? How is it possible to wrap one’s mind around it? Why are these traits so rarely joined in a single person in American culture?

8. Imagine the conversation that Tillman and Noam Chompsky would have had if their meeting had taken place. What might they have talked about? How might they have regarded each other?

9. What made Pat and Marie’s relationship so special? In what ways does the depth of their bond make Tillman’s death even more heartbreaking?

10. Krakauer begins Part Two of Where Men Win Glory with an epigraph by Chris Hedges: “War is always about betrayal, betrayal of the young by the old, of idealists by cynics and of troops by politicians” [p. 153133]. In what ways and by whom, specifically, was Pat Tillman betrayed?

12. As revealed in Where Men Win Glory what crucial mistakes has the United States made in its decades-long involvement in Afghanistan? What have been the consequences of these mistakes?

13. While stationed in Iraq, Tillman wrote in his journal: “My hope is that decisions are being made with the same good faith that Kevin and I aim to display…. I hope [this war is about] more than oil, money, & power…. I doubt that it is” [p. 196169]. What experiences are most responsible for changing Tillman from a patriotic and somewhat naive idealist to a sober-eyed realist?

14. When Tillman was killed, Krakauer writes, “White House perception managers saw an opportunity not unlike the one provided by the Jessica Lynch debacle thirteen months earlier” [p. 349295]. How did the “perception managers” in the Bush administration respond to Tillman’s death? How did they use it to their advantage? What are the similarities between their handling of Jessica Lynch and Pat Tillman?

15. Discuss the ironies that emerge from the fact that Pat Tillman’s personal code of courage, honor, honesty, and integrity was used so cynically and deceitfully by the Bush administration to further its own agenda.

16. How did Tillman’s family react to Pat’s death and to the White House cover-up of how he died? What positive results have come from the Tillman family’s response to Pat’s death?

Philip Caputo, A Rumor of War; Larry Goodson, Afghanistan’s Endless War; Chris Hedges, War Is a Force That Gives Us Meaning to Our Lives; Sebastian Junger, War; Mary Tillman, Boots On the Ground by Dusk; Ralph Waldo Emerson, Self-Reliance and Other Essays.
Learn More About Where Men Win Glory
print

The Mission, the Men, and Me

Five Years to Freedom
Back to Top