The Lord Is My Shepherd Reader’s Guide 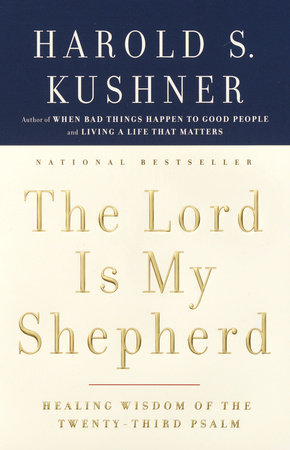 The Lord Is My Shepherd Reader’s Guide

print
The Lord Is My Shepherd Reader’s Guide

The introduction, discussion questions, suggested reading list, and author biography that follow are designed to enhance your group’s reading of Harold S. Kushner’s classic inspirational bestseller The Lord Is My Shepherd. We hope that they provide you with new ways of looking at and talking about this book and the guidance, encouragement, and methods of coping with the challenges of life that Kushner offers.

Harold Kushner was compelled in the aftermath of the events of September 11, 2001, to offer a book of practical spirituality based on the well-loved Twenty-third Psalm. Having read the prayer at countless funerals and memorial services throughout his life as a rabbi, he was struck by how the psalm’s words never failed to comfort those suffering from grief or anxiety. Not only does the poem comfort us with its poetry, honesty, and optimism, it teaches us to look realistically at the world we live in and to take courage in the presence of God. In each chapter of the book, Kushner illuminates a single line of the psalm, drawing out its life lessons and making connections with the teaching of spiritual leaders and intellectuals like Martin Buber, Paul Tillich, William James, and others. With this inspiring little book, Kushner provides insights that offer strength, courage, and the power to live a spiritually fulfilling life even in the darkest
of times.

1. Kushner notes that his understanding of God is “first and foremost an issue of morality, that there is only one God and that He demands righteous behavior.” But his congregants’ understanding of God was different from his: “their souls craved a God who would make them feel safe” [p. 16]. There is, in most people’s spiritual lives, a primitive need for a feeling of security. According to Kushner’s discussion, how does the psalm respond to this need?

2. Kushner writes that he began this book in response to the terrorist attacks of September 11, 2001. At that time, he says, many people asked how God could have let such a horrendous event happen. But Kushner argues that “God does not, God cannot promise us happy endings in a world where laws of nature and human cruelty take their daily toll. God’s promise is not that we will be safe, but that we will never be alone” [p. 26]. To what extent does this argument provide comfort?

3. In his discussion of the particular pain suffered by those who have lost a child, Kushner suggests that “parents honor their child’s memory best not by saying ‘I’ll never get over it’ but by living those ‘inherited’ years”—the years the child didn’t get to live—“as fully and as meaningfully as possible” [p. 97]. What is insightful about this approach?

4. The psalm’s words, “though I walk through the valley of the shadow of death,” imply that one will eventually emerge from this place of darkness. Yet Kushner points out that some people are unable to move beyond; they remain depressed, unable or unwilling to leave a state of bereavement [pp. 94–95]. Why do some people remain this way while others are able to go on with their lives?

5. Kushner suggests that in choosing to eat from the tree of the knowledge of good and evil, Adam and Eve chose the gift of moral conscience over that of eternal life. He says, “We cheat death, not by living forever, but by bearing, raising, and educating children to keep our souls, our values, and even our names alive. One generation, scarred and often embittered by experience, gives way to another, born in innocence and hope” [p. 23]. Kushner’s way of thinking involves making insightful connections between religious texts and real life. How does his way of writing—or his authorial voice—assure readers that he offers convincing and pragmatic guidance in life’s difficulties?

6. The line “I shall not want,” Kushner says, means “I shall lack for nothing” [p. 29]. But he also discusses the problem of wanting—desiring what we don’t have, or desiring things to be other than they are. Kushner says his version of the second line would read, “I shall often want. . . . But I will never feel deprived or diminished if I don’t get what I yearn for, because I know how blessed I am by what I have” [p. 36]. Discuss his approach to yearning and to one’s sense of gratitude.

7. What does Kushner mean in his interpretation of the phrase “He restores my soul”? Why is it so important to remember that one’s soul often does need restoration, care, and rest? What happens to people whose souls are depleted? Why do the words of Isaiah 40:31 mean so much to Kushner and his wife and daughter [p. 68]?

8. Consider the story Kushner tells of how theologian Martin Buber came to his principle of “I and Thou” [pp. 80–81]. What is the ethical basis of the “I-Thou” relationship, and how does it relate, for Kushner, to the relationship between God and human beings?

10. What difference does translation make in the words of a Biblical text like this psalm? Consider the varying interpretations of the Hebrew words tzalamut, tzal mavet, and the widely known phrase from the King James Bible “the shadow of death” [pp. 86–87]. How does Kushner understand the metaphorical implications of the original and translated words, and how does he expand the image they project into a philosophical discussion of death and its presence in the world?

11. According to Kushner, how should the knowledge of inevitable death affect how we live our lives? How difficult is it for people to believe, as Kushner does, that God shares human pain, and is with us at the moment of death [pp. 98–99]?

12. Consider Kushner’s discussion of the line, “I will fear no evil” [pp. 102–3], and the role faith plays in our ability to survive life’s problems. Why is the idea of community, as well as having faith in one’s personal partnership with God, so important to Kushner’s reading of the psalm?

13. How have terrorist actions of recent years, like the Oklahoma City bombing or the events of September 11, 2001, changed people’s understanding of evil in the world? How convincing is Kushner’s suggestion that it is better to respond to horrific events with compassionate action than with questions about why God allowed such events to occur [pp. 110–11]?

14. Discuss Kushner’s reading of the line, “Thou preparest a table before me in the presence of mine enemies.” How does he avoid the unattractive ways in which this line might be interpreted [pp. 126–34]?

15. Kushner writes, “Gratitude, I would suggest, is the fundamental religious emotion. It is where religion begins in the human heart” [p. 145]. Why, in his view, is the emotion of gratitude so powerful?

16. The Lord Is My Shepherd offers itself to us as an aid to everyday life. Which insights or words of advice are most surprising, most persuasive, most profound, or most useful to keep in mind on a daily basis?

17. Kushner opens the book with a question: “Can fifteen beautiful lines from a single page of the Bible change your life?” [p. 5] If you were familiar with the Twenty-third Psalm before reading this book, how have your thoughts about the psalm—or about your life—been altered by what you have read? Reread the opening paragraph after finishing the book. Does it seem that Kushner is right in his claims for the power of the psalm?

Living a Life that Matters

The Complete Conversations with God

The Inner Voice of Love

Burnt Books
Back to Top