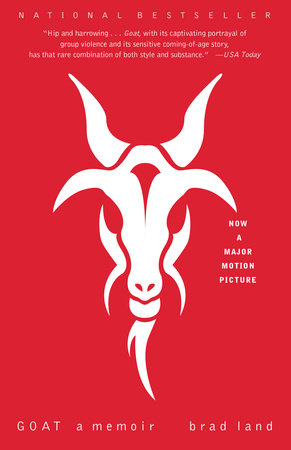 1. Goat is a memoir teeming with violence. Did you find yourself more shocked by the random violence in the book than by other, sanctioned types of violence? If so, why?

2. Throughout Land’s memoir, many characters grapple with the difficulty of fitting in with their peers. What sorts of pressures do you feel are placed on young men and women? Where does this stress come from? What could be done to combat it?

3. In your opinion, is the Greek system in the United States a viable outlet for young men and women? Given the long, public history of hazing and abuses committed by some fraternities and sororities, do you feel the Greek system should be abolished? If not, how could conditions be improved?

4. The narrator is involved in different kinds of violence: violence is committed against him and he participates, in some ways, in violence toward others. Identify some places in the text where the author falls into that violence himself, where he becomes part of it.

6. In your opinion, is Land making a claim about the nature of the relationship between different forms of violence in society, like that of violent crimes and fraternity hazing? Or is he simply telling a story and allowing the reader to formulate his or her own opinion about this relationship? If so, what is the relationship?

7. Brad’s relationship with his younger brother, Brett, is integral to the narrative. What is it about their relationship the author find so compelling, so powerful, that he constantly moves toward him and seeks his approval in one way or another? Could Brett have done anything differently to protect Brad from his own self-destruction? What could Brad have done differently to change what happened to him? What is your reaction to the close, almost suffocating nature of the sibling relationship between Brad and Brett?

8. Goat is greatly concerned with guilt and forgiveness. In what ways do the violent acts committed against the narrator cause one to think about forgiveness? In what way does Brett’s guilt and his apparent inability to deal with the things that happen to Brad cause him to feel unable to ask for forgiveness?

9. There are many scenes in the book in which Brad is participating in an act of hazing or some fraternity ritual and Brett is off to the sides, in a corner, unable to watch or participate. How does this apparent refusal to help, to give recognition, implicate Brett ethically? Furthermore, how does this affect our beliefs about third parties and forgiveness? Are third parties who choose not to intervene when violence is taking place implicated in those violent acts, and, if so, to what extent?

11. How is this memoir different in form, structure, and tone, from other memoirs you’ve read? Which styles do you feel are more compelling than others?

12. Realizing the inherent difficulty of writing a memoir of this sort, do you consider the voice Land cultivates authentic? In order to remain completely honest with regard to the narrative, the author of any memoir must tell the story as it unfolded — but in doing so, the author always runs the risk of sounding too vulnerable or emotionally inhibited. Given the inherent difficulty of exposing oneself in a radical way, do you think Land was successful?

13. Authors of memoirs portray other people’s actions from their own perspective, often without asking their permission. Does this compromise the author ethically?

15. Is there such a thing as an objective claim about the past? How would any author really retrieve the past as it happened, without having to rely solely on memory? If an author uses interviews, for example, does the presence of a tape recorder or microphone, or the very recognition of the fact that the author is listening intently, always compromise the objectivity of what interviewees have to say? Is complete objectivity even possible?

I Said Yes to Everything

I’m the One That I Want

Skywriting
Back to Top