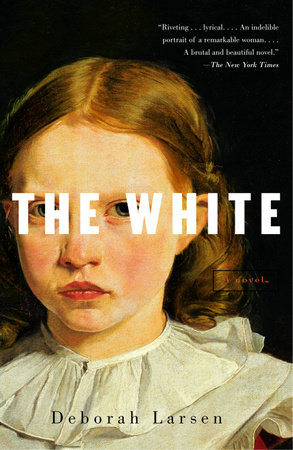 “Riveting…lyrical…. An indelible portrait of a remarkable woman…. A brutal and beautiful novel.” —The New York Times

The introduction, discussion questions, suggested reading list, and author biography that follow are intended to enhance your group’s experience of Deborah Larsen’s The White, a novel based on a historical event from the French and Indian war.

In the spring of 1758 Mary Jemison and her family were taken captive by a Shawnee raiding party near Gettysburg, Pennsylvania. While the rest of her family was killed by the Shawnee, Mary was chosen for adoption by a Seneca family in exchange for a son of theirs who had been killed by whites. Mary lived among the Indians for the rest of her life, bore children to two husbands, and even when offered the chance to return to white society chose to remain with the Seneca. More than sixty years later, Mary told her story to a white doctor, James Seaver, who first published it in 1824 under the title The Life of Mary Jemison, The White Woman of the Genesee.

In The White, Deborah Larsen uses Mary Jemison’s story as the basis for an elegant and riveting novel. She gives Mary a unique voice, a passionate nature and a fine intelligence, creating a memorable character who endures the shattering loss of her entire family, and who meets all of the exigencies of her life with integrity and courage. Bringing to vivid life not only an extraordinary woman but also a whole cultural conflict between natives and white settlers in the early decades of the American nation, The White is a gripping and unforgettable tale.

1. What is revealed about Mary’s character in the first few pages of the book? Why does Larsen have her think about the fields as she and her family are led away as captives, “the fields are just themselves” [p. 8]? What is Mary’s approach to her family’s Bible-centered Protestantism? How does her objectivity work in her favor as she enters this new phase of her life?

2. Why do the Shawnee decide to keep Mary as a captive, and to kill the rest of her family? Why, in the midst of all this, does she resent her father so much? Does Mary show more maturity of judgment than her father does? Does Mary’s wish to die, soon after her family is killed, differ from the passivity she so scorned in her father?

3. Reading The White is a very different experience from reading James Seaver’s The Life of Mary Jemison. Because Mary could no longer write English at the time she met Seaver, her story is relayed in his words, and in his book, Mary’s mother’s farewell speech reads as follows: “My dear little Mary, I fear that the time has arrived when we must be parted forever…. O! How can I part with you my darling? What will become of my sweet little Mary?… O that death had snatched you from my embraces in your infancy; the pain of parting then would have been pleasing to what it now is; and I should have seen the end of your troubles! —Alas, my dear! My heart bleeds at the thoughts of what awaits you; but, if you leave us, remember my child your own name, and the name of your father and mother. Be careful and do not forget your English tongue. If you shall have an opportunity to get away from the Indians, don’t try to escape; for if you do they will find and destroy you. Don’t forget, my little daughter, the prayers that I have learned you—say them often; be a good child, and God will bless you.” [James E. Seaver, The Life of Mary Jemison, 1824 (NY: American Scenic and Historic Preservation Society, 1942), pp. 27–28.] Compare this, in terms of tone, drama, word choice, and psychology, with how Larsen tells this part of the story [see pp. 13-14]. Which conveys a greater sense of realism? Seaver adopted the sentimental rhetoric of nineteenth century fiction; how would you characterize Larsen’s prose?

4. Why do the Indians insist upon displaying the scalps of Mary’s family in front of her, particularly commenting upon her mother’s auburn hair [pp. 17-18]? Mary later says, “According to custom, I stood in a brother’s place, though I may just as easily have been scalped since satisfaction and justice came either through the taking of life or by means of adoption” [p. 48]. Does Mary suffer from a form of survivor’s guilt? Is she right to think with bitter irony of the “extravagant concern” of the God who according to Christian scripture had said, “the very hairs of your head are all numbered” [p. 17]?

5. For a time Mary enters a period that can be interpreted as a state of severe depression: “she had succeeded in installing the great, pale blankness of non-thought into her head. It was an actual thing, that blankness: it hung there like a great pearly fish in water untouched by a sky the color of purple. By dint of the slow-motion lashings of its massive tail this fish confused, unhinged, and scattered both certain idea and clear feeling” [p. 26]. How does this passage demonstrate Larsen’s approach to psychology as a critical element in her reconstruction of the character of Mary Jemison? How does the author use imagery and lyricism to convey these ideas?

6. Mary, her Indian sisters say, was sent to them “through earthly and just trading practices” by their dead brother. What does the adoption ceremony [ see pages 30–33] reveal about the idea of justice and the value of the individual in the Senecas’ religion? In another ceremony, Mary is purged by the Society of False Faces [see pages 42–45]. How do these two ceremonies demonstrate the Indians’ ideas about human emotion, and the necessity of keeping destructive spirits at bay?

7. According to Seaver, Mary was given the name “Dickewamis; which being interpreted, signifies a pretty girl, a handsome girl, or a pleasant, good thing.” [Seaver, The Life of Mary Jemison, p. 38.] Larsen gives Mary a different name: “Two-Falling-Voices. Two voices, two pitches, two slopes” [p. 32]. We are told that when Sheninjee looked at Mary “he saw twins and that she was aptly named: the white woman and also the Seneca woman. Two-Falling-Voices. Like an earth-hill under the sky that had two downward slopes” [p. 52]. Why is Mary’s new name so important to the novel as a whole? What is the relationship between Mary’s name and the book’s title, The White?

8. What is the significance of Mary’s encounter with the Englishwoman at Fort Pitt and her thoughts about the woman’s family as Mary’s Indian sisters rush her back towards their village [pp. 37–39]? Mary quotes lines from the Scriptures to herself for days afterwards; are these quotations the truth of her experience? Are they necessary for her as she mourns for herself and her family?

9. How do Mary’s Indian sisters respond to her state of despondency? How does the episode in which Mary cuts her hand and speaks the word “blood” change things for her, and change her relationship with Slight Wind? Is there a necessary movement from self-absorption to objectivity in this episode? [See pages 45–46.]

10. What qualities make Sheninjee attractive to Mary? How do his bearing and his words during the betrothal ceremony demonstrate what sort of man he is? Mary says, “I saw in the Delaware something that must be the very opposite of sentimentality and wondered what would happen should I try to add that man’s way of knowing to my own” [p. 56]. At what points in the story does Mary attempt to rid herself of the “sentimentality” of her own culture?

11. Mary imagines that the child in her womb is speaking to her. Both before its birth and after its death, the child admonishes her for betraying her white family. How does this episode illustrate the painful division of Mary’s mind and identity? [See pages 68 and 75.]

12. After Sheninjee’s death, Mary thinks that it might be a good time to return to white society. Yet she refuses to allow herself to be redeemed by the Dutchman John Van Sice [see pages 110–111]. Do Mary’s actions indicate that she feels more comfortable in Indian society than in the company of whites, or is she merely unwilling to undergo yet another wrenching change? What are the reasons that she stays with the Seneca?

13. What kind of a person is Bending Tree, Mary’s Indian mother? What are the similarities between their characters? What qualities of character does Mary display in reprimanding her Indian brother, Black Coals [pp. 113–114]?

14. Connecting Jesus with the Indians’ religion, Mary says to herself, “For my part, I remembered how Jesus in the Scriptures had always directed attention to his Father in heaven and away from himself…. I thought then that he knew he was part of the Good Spirit and that he had some things to say to the Hebrews and to the Romans and that he took care of people who suffered and that these were the important things. Share the spirit of his ways, I told myself, and the spirit of the ways of others who are like him—persons like Tree. Then leave the rest to the Great Spirit. Jesus, I thought, would understand this” [p. 123]. Why does this apparently healing conversation with herself seem so jarring in comparison with the dream Mary goes on to relate, in which her white mother treats her scornfully for becoming an Indian [pp. 123-124]? Has Mary on some level been disloyal to her parents and to the life they intended for her right? Or is she right to try to make peace with her fate, and to create bridges between her own upbringing and Indian ways? What spiritual qualities does the novel bring to our attention?

15. How, in The White, does Larsen distinguish between the differing attitudes of Indians and whites toward nature and the land, to shared work and ideas of community? Does the novel demonstrate a surprising degree of tolerance in early-nineteenth society, with Mary befriending ex-slaves, and with Indians living side by side with whites?

16. To what degree does the novel suggest that the white colonists are responsible for the disintegration of Indian tribal life and traditions? Who, for instance, is to blame for the deaths of Mary’s sons? How satisfying is the novel’s ending, with Mary owning her own land, living a peaceful life surrounded by the remaining members of her Indian family?

Deborah Larsen grew up in St. Paul, Minnesota, and now lives with her husband in Gettysburg, Pennsylvania. Her collection of poetry, “Stitching Porcelain,” was published in 1991, and her poems and short stories have appeared in The Nation, The Yale Review, and The New Yorker, among other publications. She has been a Wallace Stegner Fellow at Stanford and a Wallace Stevens Fellow at Yale; she teaches creative writing at Gettysburg College, where she holds the Merle S. Boyer chair. The White is her first novel.

The Movement of Stars

Quiet Until the Thaw

Above All Things
Back to Top