The Girl Who Played with Fire Reader’s Guide 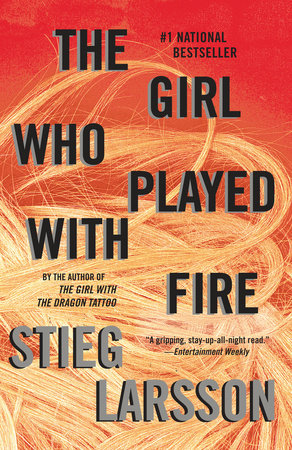 The Girl Who Played with Fire Reader’s Guide

print
The Girl Who Played with Fire Reader’s Guide

“Boasts an intricate, puzzlelike story line . . . even as it accelerates toward its startling and violent conclusion.” —Michiko Kakutani, The New York Times

The introduction, questions, and suggestions for further reading that follow are intended to enhance your reading group’s discussion of The Girl Who Played with Fire, Stieg Larsson’s propulsive follow-up to his bestselling debut, The Girl with the Dragon Tattoo.

Mikael Blomkvist, crusading journalist and publisher of the magazine Millennium, has decided to run a story that will expose an extensive sex trafficking operation between eastern Europe and Sweden, implicating well-known and highly placed members of Swedish society, business, and government.

But he has no idea just how explosive the story will be until, on the eve of publication, the two investigating reporters are murdered. And even more shocking for Blomkvist: the fingerprints found on the murder weapon belong to Lisbeth Salander—the troubled, wise-beyond-her-years genius hacker who came to his aid in The Girl with the Dragon Tattoo, and who now becomes the focus and fierce heart of The Girl Who Played with Fire.

As Blomkvist, alone in his belief in Salander’s innocence, plunges into an investigation of the slayings, Salander herself is drawn into a murderous hunt in which she is the prey, and which compels her to revisit her dark past in an effort to settle with it once and for all.

1. Have you read The Girl with the Dragon Tattoo? How did your knowledge—or lack of knowledge—about that novel affect your reading of this one?

2. Discuss the prologue. What did you think was going on? At what point did you fully understand it?

3. On page 26-27, Larsson writes, “Within mathematics, assertions must always be proven mathematically and expressed in a valid and scientifically correct formula.” What does this have to do with the plot of the novel? Why is Salander so intrigued by mathematics?

4. Outwardly, Salander is supremely self-assured. Why does she have breast augmentation surgery?

5. Ultimately, does Salander’s agreement with Nils Erik Bjurman pay off? In what ways?

6. Revenge is a major theme of the novel. Who seeks it, and what are the results?

7. Discuss gender politics as they affect the plot: the treatment of Salander, Erika Berger, Miriam Wu, Sonja Modig, and the trafficking of Eastern European women. What do you think Larsson was trying to say about the role of women in society?

8. On page 131, Berger thinks about Blomkvist: “He was a man with such shifting traits that he sometimes appeared to have multiple personalities.” Given that the reader is allowed inside Blomkvist’s head, does this seem like an accurate description to you? How is Berger right in her assessment, and how is she wrong?

10. Discuss the arrangement agreed to by Berger, Blomkvist, and Gregor Beckman. How does this benefit each of them? Does it hurt them?

12. Why does Blomkvist give Salander the benefit of the doubt, when so many others don’t?

13. When newspaper articles begin to appear featuring interviews with long-ago acquaintances of Salander, did it change your perception of her character? Discuss the nature of truth in these instances: is it possible both sides were remembering accurately?

14. Discuss Dr. Peter Teleborian. What role does he play, and why?

15. Why does Berger put off telling Blomkvist about her new job? What will the ramifications of the new job be?

16. On page 403, Salander thinks, “There are no innocents. There are, however, different degrees of responsibility.” What is the significance of this statement? How does Salander use this notion to guide her actions?

17. On page 580, Blomkvist calls Salander “the woman who hated men who hate women.” Is this an accurate assessment? How did she end up this way? How does it affect her behavior?

19. Toward the end of the novel, does Blomkvist do the right thing by having Berger deliver only part of the story to Jan Bublanski and Modig? What do you think he should have done?

20. Holger Palmgren tells Dragan Armansky on page 614, “What happens tonight will happen, no matter what you or I think. It’s been written in the stars since [Salander] was born.” Why does he feel this way? Is he right? How does his inaction affect the outcome of the story?

21. Discuss the ending. Were you satisfied? What more, if anything, would you like to have had happen?

22. If Stieg Larsson were still alive, what one question would you most like to ask him?

Stieg Larsson, who lived in Sweden, was the editor in chief of the magazine Expo and a leading expert on antidemocratic right-wing extremist and Nazi organizations. He died in 2004, shortly after delivering the manuscripts for The Girl with the Dragon Tattoo, The Girl Who Played with Fire, and The Girl Who Kicked the Hornet’s Nest.

A Time to Kill

Prince of Fire
Back to Top