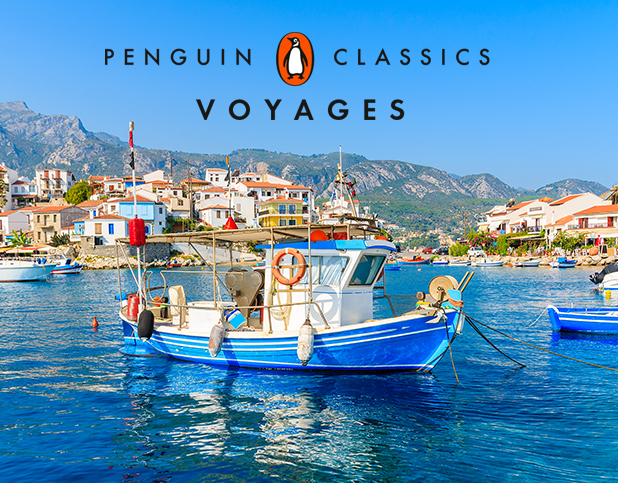 Celebrating the Classics: A Literary Journey on Patmos, Greece

The Iliad and Odyssey are considered among the most important works in western literature. Both literary text and historical record, no other works provide as much insight into ancient Greek civilization.  On this inaugural trip, delve deep into a world of myths and legends as you explore the cultural backdrop, themes, and driving passions of Gods and humans in the Greek classics, led by renowned editor for Viking and Penguin Books, Beena Kamlani, and Elda Rotor, Vice President and Publisher of Penguin Classics. Your journey will begin in the idyllic Dodecanese island of Patmos, bounded by the Aegean Sea. Begin your days with lively discussions on topics that go deep into the heart of both works and range from the art of writing, to the challenges of translating classical novels, to current editing and publishing processes for these timeless books. In the afternoons explore the nook and crannies of Patmos, home of windmills, a magnificent monastery, and delectable food. See the Cave of the Apocalypse, where St. John wrote the Book of Revelations, walk through Chora’s narrow streets, surrounded by grand mansions built by wealthy ship owners and traders in the 17th century, and shop in the many unique boutiques of Patmos. Learn how to create timeless Greek dishes at a private cooking class, visit a flourishing winery, hike through the countryside to take in majestic views of the Mediterranean, and pay homage to Athena at an open-air shrine dedicated to her on the edge of the ocean. Depart Greece at the end of your nine-day stay with your mind expanded, soul nourished, and your body satiated.

Arrive today in Samos, a Greek island in the eastern Aegean Sea, and transfer to your hotel. Gather tonight for introductions and dinner with your fellow travelers as well as your expert, Beena Kamlani and publisher Elda Rotor and toast to the start of an unforgettable week.

Depart this morning on a public ferry from Samos to Patmos, one of the northernmost islands of the Dodecanese chain and our home for the next week. Dock this afternoon in the town of Skala, the largest town on the island, and transfer to your hotel, the Patmos Aktis, a gorgeous property, only a few miles from Skala, that overlooks the picturesque Grikos Bay.

After you’ve had a chance to unpack and unwind, return to Skala, the main harbor and commercial hub of Patmos. Centered around a lively port, Skala is home to picturesque, white-washed buildings, ancient acropolis ruins, and the 17th-century Church of Agia Paraskevi of Cavos – all of which you’ll see on an evening walking tour. End your day with a dinner at a local Greek restaurant, where you will indulge in classical Greek dishes and delectable wines that will truly welcome you to this magical isle.

Begin your literary journey in earnest with a lively morning discussion of The Iliad. Questions will be provided by Beena in advance to help facilitate the conversation. Once you’ve finished debating King Agamemnon and Achilles, the Trojan War and the abduction of Helen, lunch together as a group in Patmos City, also known as Chora, at a local taverna. After lunch, visit the windmills of Chora. These mighty windmills sit atop a hill overlooking the Aegean and were used to grind cereals for flour. Originally built in 1588, they were fully restored in 2009 and still grind flour to this day, which is used by the local bakeries.

Enjoy the rest of the day at leisure. Relax by the pool with a good book, sip coffee in a local café as you watch the sun set, or hike across the island on back roads and hidden alleys.

This morning, turn your attention to the most thrilling adventure of them all – The Odyssey. Continue with the themes discussed yesterday and discover new depths to both these classical works. Debate the leadership skills of Odysseus and the Gods’ roles in his long-delayed journey home. Afterwards, enjoy lunch and the afternoon on your own soaking up Patmos. May we suggest a walk on the beach or through the serene flower-covered hills, fragrant with the scents of thyme and bay, and filled with birdsong?

As the sun sets, sip ouzo before trying your hand at some traditional Greek dishes during a private cooking class. Learn how to bake quintessential Greek culinary treats such as moussaka and baklava, then sit down to enjoy them yourself.

This morning we’ll go from absorbing the completed works to examining how those works were created. Learn from Beena the building blocks of the classic novel and how books like the Iliad and the Odyssey were able to survive, and thrive, into the modern era. Homer’s classic tales will continue to enthrall readers forever. Why is this so, given our time of transience and obsolescence? We will look at the qualities that make works timeless, enduring, and always relevant. Enjoy a lunchtime meal with your fellow travelers before spending the afternoon and evening at leisure.

Today look inside the cover of the modern publishing world. Learn about the inner workings of the publishing industry and Penguin Classics – how novels are selected, edited and designed. Join Beena and Elda at this lively morning talk to get an insider’s look at the literary and publishing world.

Enjoy lunch and the afternoon on your own. This evening gather with your fellow travelers for a sunset cocktail hour before enjoying dinner together as a group at a lovely seafood restaurant, where the fish is the freshest you will ever eat, and the hospitality unforgettable.

Visit the Cave of the Apocalypse, a UNESCO World Heritage Site, with a local expert this morning. It is here, in a cave on a hillside halfway between Skala and Chora, that St. John is purported to have written the Book or Revelation. After being expelled from nearby Ephesus in AD 95, St. John settled in Patmos, in his cave on the hill, where he experiences a divine disclosure, an ‘apocalypse’, and composed the Book of Revelation, before returning to Ephesus and dying in AD 100. Inside this holy space you will see mosaics portraying St. John’s visions, his resting place within the cave, and the fissures where he heard the voice of God.

Afterwards, visit the Monastery of Saint John the Theologian. Founded in 1088 by the soldier-priest John Christodoulos, the monastery is also a UNESCO World Heritage site. Over 330 manuscripts are housed inside its library, including 82 manuscripts of the New Testament, which you will see on a special access visit (subject to confirmation). In addition, the skull of Saint Thomas the Apostle is also among the monastery’s relics. Get a peek inside rooms not normally open to the public and learn the history of this fascinating space. Enjoy lunch at a nearby restaurant with picturesque views over the island.

Return to the hotel for an afternoon discussion. Today, get a crash course in the art of writing and translating the perfect classical novel. With Beena, discuss important corollaries between the ancient classics and today’s more modern novels and how the influences of the past appear in the works of today. Discover how the classics still permeate today’s writing culture and the direct links many modern novels establish with books from the past. Sip an afternoon cocktail with your fellow book lovers at the seafront bar, before heading out for dinner on your own.

This morning, pay a visit to the convent of Evangelismos, a nunnery with 40 residents that dates back to the 17th century. Learn about the nuns’ community work, see their beehives (as they are avid beekeepers), and learn about the spitha, a Byzantine embroidery stitch employed by high-ranking Byzantine families and still used by the nuns today. Continue on a tour of the island, stopping at the Profitis Ilias, a small church located in Chora at the highest point on Patmos, behold the panoramic view over the island, and the Aegean Sea beyond. Then, journey to the Rock of Kallikaltsou, a pre-historic open-air shrine dedicated to the goddess Athena. Conclude with a spectacular lunch featuring local dishes such as moussaka, spanakopita, and tzatziki, as well as a local wine tasting at a nearby restaurant.

Enjoy a final afternoon at leisure in Patmos at leisure before gathering for a farewell dinner. Toast your literary journey, before boarding the Blue Star overnight Ferry to Athens.

Sail into Athens with the morning light, docking at 8:00 am in Piraeus, the port of Athens. Disembark the ferry and transfer to the Athens airport for your flight home.

Beena Kamlani is a Pushcart Prize-winning fiction writer whose work has appeared in many publications. She has been awarded residencies at Yaddo, Ledig House, Hawthornden Castle, Hedgebrook, and won a nomination for the inaugural Pushcart-Jentel Arts fellowship for fiction at Jentel Arts in Wyoming for 2010. She was a Tennessee Williams Scholar in Fiction at Sewanee and was awarded a grant in fiction from the Connecticut Commission on the Arts. Her novel-in-progress won the Yeovil Fiction Award in 2017.

Formally educated in England, she has a B.A. (Hons.) in English and American Literature, and an M.A. in European Literature since 1850.

Elda Rotor is Vice President and Publisher of Penguin Classics. She oversees the U.S. editorial program including the works of John Steinbeck, Arthur Miller, Shirley Jackson, William Golding, Amy Tan, Alice Walker, and the Pelican Shakespeare series. She has created and edited several series including the Penguin Orange Collection, Penguin Civic Classics, the Penguin Drop Caps, and the new Penguin Vitae series. She is a board member for the Academy of American Poets and Kundiman, a national organization dedicated to Asian American creative writing.

Located on the shores of the Vathy Bay, with gorgeous views of the Aegean from the rooftop garden, the SAMOS Hotel is the perfect location for our one-night stay. Relax on your own private balcony as you take in the bells of returning fishing boats, take a swim in the outdoor rooftop pool, and get a good night’s sleep in rooms with soundproof windows. Each room features complimentary Wi-Fi, refrigerator, and hairdryer.

Nestled on the shores of Grikos Bay, and just steps away from the Grikos beach, the Patmos Aktis is an oasis of calm and tranquility. This boutique, contemporary hotel features award-winning dining, exclusive spa facilities and a unique seafront bar. Each light-filled room is outfitted in a neutral color palette, so as not to distract from the natural beauty viewed just outside the window. Complimentary Wi-Fi, beach towel, in-room safe, and rain showers are included to help you make the most of your time at the hotel.

Travel back to Athens in style onboard the Blue Star 1. Relax in your private cabin with en-suite bathroom while the ferry sails across the sea to Piraeus. Complimentary Wi-Fi, indoor and outdoor cafes, gift shop, and full-service restaurant are available on board.

NOTE: Space is limited to 25 guests. Travelers to handle costs and logistics associated with airfare, airport transfers, meals, and activities that are not included in the above itinerary. Trip will be arranged by a third party operator: Academic Travel Abroad. For additional information please call 800.556.7896.