Jay Chandrasekhar of MUSTACHE SHENANIGANS and of Super Troopers fame joins John to talk movie-making, starting out in comedy, and why he’s a little tired of superheros.
Unlucky in love? Aziz Ansari goes deep into the contemporary dating world in his new book, Modern Romance. With his coauthor, noted sociologist, Eric Klienenberg, Ansari looks at the social science of dating with his signature sense of humor. Read more about Modern Romance here.
New York Times best selling author, Jen Lancaster’s new memoir, I Regret Nothing, is all about goals. She talks to Amy about her bucket list, which includes learning to ride a bike, visiting Italy, and more.
Comedian and New York Times bestselling author, Dave Barry wants you to know that ketchup does not need to be refrigerated. He also wants you to Live Right and Find Happiness (Although Beer Is Much Faster) in his new, New York Times bestselling, hilarious book about what it’s like raising a child in today’s world. Barry met Lindsay at the studio to discuss all things from Brazil World Cup to Justin Bieber, and we couldn’t stop laughing. Hands down, one of our funniest interviews yet. Enjoy! 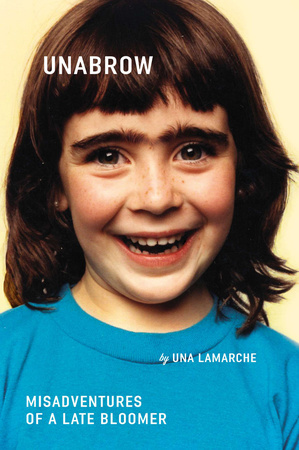 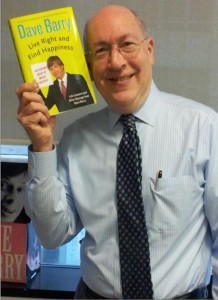 Editors get very passionate about books they work on – the Editor’s Desk series is his or her place to write in-depth about what makes a certain title special. Get the real inside-scoop on how books are shaped by the people who know them best. I first got to know Dave Barry about twenty years ago. By that time, he’d already won the Pulitzer Prize for commentary and had more bestsellers than half the publishing houses I know, but he’d never tried fiction. Then the Miami Herald approached him and several other South Florida writers, including Carl Hiaasen and Elmore Leonard, to write a serial novel; I bought the book rights; and I loved his chapter so much, I asked if he wanted to write a whole novel. He said, sure, great idea! It wasn’t until he signed the contracts that he realized that meant he actually had to write a novel, with characters and plot and, you know, a lot of words. It was a brutal awakening. I’m not sure he’s ever completely forgiven me…. But I digress. Since then, we’ve done many books together, both fiction and nonfiction, but I have to say I think his new one may be my favorite: Live Right and Find Happiness (Although Beer is Much Faster): Life Lessons and Other Ravings from Dave Barry. It’s a collection of all-new essays about what one generation can teach to another – or not. Two of the centerpieces are letters to his brand-new grandson and to his daughter Sophie, who will be getting her Florida learner’s permit this year (“So you’re about to start driving! How exciting! I’m going to kill myself.”). Another explores the hometown of his youth, where the grownups were supposed to be uptight Fifties conformists, but seemed to be having a lot of un-Mad Men-like fun – unlike Dave’s own Baby Boomer generation, which was supposed to be wild and crazy, but somehow turned into neurotic hover-parents. Yet another conjures the loneliness of high school nerds (“You will never hear a high-school girl say about a boy, in a dreamy voice, ‘He’s so sarcastic!’”).

All of them are extremely funny, but they also have the essence of humor: real heart. They make you not only laugh (a lot), but think and feel, and I promise you will be reading a lot of it aloud to people you love, and even to random strangers. Perhaps over a beer. Here’s to you, Dave. Read more about Live Right and Find Happiness here. Listen to a Beaks & Geeks interview with Dave Barry:
Amy interviews Matt Adrian about his new book The Mincing Mockingbird Guide To Troubled Birds.
Amy interviews Jason Porter, author of Why Are You So Sad?, live at BEA.
Back to Top