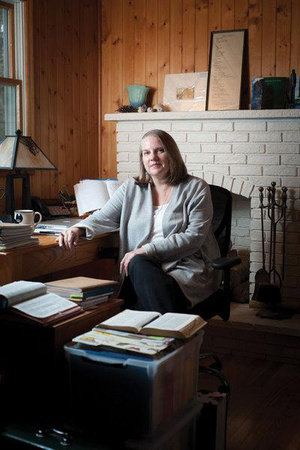 Carol Goodman is the author of The Lake of Dead Languages, The Seduction of Water, The Drowning Tree, The Ghost Orchid, The Sonnet Lover, and The Night Villa. The Seduction of Water won the Hammett Prize, and others of her novels have been nominated for the Dublin/IMPAC Award and the Mary Higgins Clark Award. Her fiction has been translated into eight languages. She lives in New York state with her family.

The Bones of the Story

Tracing the genesis of a novel after you’ve written it can be a little like reconstructing a skeleton from millennia-old bones that have been scattered over great distances. I’m pretty sure, though, that this book started with the single image of a mother telling a bedtime story to her daughter. It was certainly a familiar image since, for the last ten or so years, I had ended each night by reading to my daughter for at least an hour. I chose, more often than not, fairy tales both because she seemed to like them and because I have always loved them. Back in graduate school, I’d written a paper called “From Old Wives to Warrior Princesses” on the presence of fairy tales in contemporary fiction. I’ve always admired writers, such as Angela Carter, A.S. Byatt, Margaret Atwood, and Alice Hoffman, who integrate elements of fairy tales into their fiction and I’m a big fan of Marina Warner’s study of fairy tales, From the Beast to the Blonde. Ultimately, though, the image of a mother telling stories to her daughter had a more intimate source: the stories my mother told me.

Instead of fairy tales, though, my mother brought me up on stories of her Irish-Catholic childhood growing up in Depression-era Brooklyn and moving to Coney Island as a young woman on the eve of World War II. In many ways these stories were as exotic and remote to me as fairy tales. Ice was delivered to their cold-water flat in Bay Ridge by a horse-drawn cart and oatmeal was cooked on a wood-burning stove. To a child growing up in a pre-fab development in suburban Pennsylvania, my mother’s descriptions of pre-war Brooklyn sounded as quaint as Hansel and Gretel’s cottage. There was that same sense of cheerful and thrifty poverty. Dinner was sometimes bread and hot milk with sugar because that was all they had, but still her father prepared it as if it were a delicacy. Although they were poor, they never took charity and were proud and grateful when my grandfather got a job digging ditches for the WPA. My mother had only one white shirt to wear with her Catholic school uniform, but her mother washed and bleached and starched and ironed it every day so that “it could have stood up on its own” and looked every bit as good as anyone else’s.

My mother’s stories were filled with characters as colorful as any fairy tale’s. Her aunt Nanny was a Burlesque dancer who dressed like a gypsy and was once arrested in New Haven for slapping a woman who turned out to be the police chief’s girlfriend. When my mother and her parents went to the jail to bail her out my mother was so horrified to see her beloved, beautiful aunt in a crude cell with an exposed toilet that she burst into tears. The police chief bent down and told her that he would let her aunt out, “if she sang a little song and danced a little dance.” My mother always stressed at this point in the story–no matter how many times I had heard it–that she was a painfully shy child and nothing could have been more frightening to her than to perform in front of a strange adult. But she did. And her Aunt Nanny was freed. Later we both conjectured that there must have been some exchange of money as well, but still, it was as good a Rapunzel story as I ever heard.

Like any genuine fairy tale, my mother’s childhood was rife with darkness and tragedy. She had a younger brother–Martin, but everyone called him Pet because when he was born my mother jealously referred to him as the family “pet”–who died.
“What of?” I asked, horrified, but also peculiarly drawn. In my safe post-vaccine, post-antibiotic 1950’s world I’d never known of a child to die. In my mother’s world, her own baby brother had died.
“I was never sure,” my mother told me at first, “but I overheard the doctors say it had something to do with his head.”

Over years of telling this story it eventually came out that my mother blamed herself for Pet’s death because he had fallen while she was babysitting him (she was under ten when it happened–later she gave this as a reason for never letting young children baby-sit,) but in later years she guessed that the reference to his “head” might have had something to do with meningitis. Unfortunately, my mother never shared with her parents the fact that she held herself accountable for Pet’s death. She thought they were generous and forgiving for never bringing it up or holding it against her.

I think it was only by telling Pet’s story over and over again that my mother was finally able to let go of that guilt. At first the details of the story emerged as I grew old enough to understand them, but then they also grew as she understood them in the telling. My mother was making sense of her life by telling it to me. I can think of no better introduction to the writing process than witnessing that kind of storytelling, even though it was sometimes unsettling to hear what she had to say.

Listening to my mother’s stories, I was entranced by the other world she had lived in, but I also suffered a peculiar sense of displacement. It’s always a bit of a shock to realize that your parents had an existence outside their role as caretaker to you. It is that foreignness which makes the Selkie story so disturbing because it suggests the possibility that the mother can leave–which, in fact, she does. Nothing is more frightening to a child than a parent’s disappearance (death itself seems like an abandonment to a child) and my mother had that experience as well.

Like the human daughter in the Selkie story my mother lost her mother young, when she was seventeen and her mother was only forty-four. She was with her in that tenement kitchen when she suddenly collapsed. A blood clot, leftover from a childhood bout of rheumatic fever, had flown to her brain, killing her instantly. In the aftermath, my mother moved to Coney Island–only miles away from Bay Ridge, but a completely different world. For one thing, she had never met a Jewish person. One of her favorite stories is how she overheard a woman asking a deli owner for “sour cream” and laughed because she thought it was a joke. Coney Island in the forties was also filled with gangsters and heroine addicts. For a pretty, young girl on her own (my mother was and is quite beautiful–shopkeepers, once she stopped laughing at their sour cream, called her Shaineh maidel, ‘pretty girl’ in Yiddish,) it would have been easy to fall in with the wrong crowd. Many beautiful young girls (according to my mother Coney Island in the forties possessed an unusual percentage of beautiful girls) who were not so discriminating as my mother became prostitutes and drug addicts. These cautionary tales, which my mother favored as I entered my tumultuous adolescence, always ended with the pretty young girls losing their looks and their teeth. It was exciting to learn that my mother had known the legendary “Kiss-of-Death” girl, but also daunting to hear these teeth-loss stories as I headed out on a date. It sounded like an old-fashioned curse for bad behavior along the lines of the red-hot iron shoes Snow White’s stepmother is forced to dance in until she dies.

Although I might have begun to suspect the instructive nature of some of my mother’s tales, I knew even then that I was lucky that I got to keep hearing them and watch the ongoing process of my mother making sense of her life. What, I wondered, would it have been like if I only had the stories? That’s Iris’s situation in The Seduction of Water. All she has left of her mother is her stories from which she must reconstruct her mother’s life and begin to construct her own story. The stories are her inheritance, her talisman.

There’s a kind of fairy tale in which a young girl whose mother has died is protected by some charm or animal familiar representing the lost mother. In “Yeh-hsien,” a Chinese version of Cinderella, the mother’s spirit inhabits a magic carp which befriends and comforts Yeh-hsien. When the evil stepmother kills the carp, its very bones continue to protect the girl. This somewhat gruesome device of protective bones also appears in Grimms’ “Aschenputtel,” in which a hazel sapling that grows out of the mother’s buried bones literally shelters the orphan girl, and in the Scottish tale, “Rashin Coatie,” in which the dead mother inhabits a red calf and continues to watch over her daughter even after the calf is slaughtered.

Instead of bones, Iris’s mother bequeaths to her stories. The Selkie story embraces the fear of losing a mother but also promises that a mother’s love is an enduring legacy. The fantasy tales contain—encoded—her own childhood tale of loss and resurrection. However, most importantly, she passes on to Iris the ability and willingness to reveal and explore herself through storytelling. It’s what my mother gave to me through a lifetime of storytelling: the ability to make sense out of one’s own life and, out of that sense, craft the best life. An inheritance every bit as valuable as good bones and a sound set of teeth.