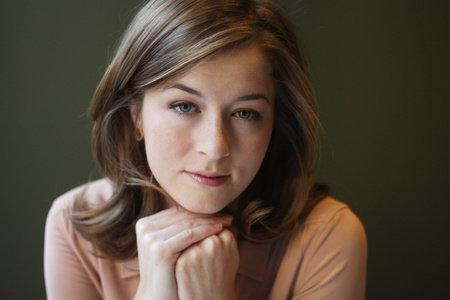 REBECCA HARRINGTON is the author of the novel Penelope and the comic essay collection I’ll Have What She’s Having. Her work has appeared in New York Magazine, The New York Times, Elle, NPR.com, and other publications. She lives in New York City.

The fascination with celebrity dieting is everywhere (see: a random selection of covers from US Weekly, Life & Style, Star, etc.) and Rebecca Harrington has delved right into this worldwide obsession with her delightful new book, I’ll Have What She’s Having: My Adventures in Celebrity Dieting, an extension of her NYMag columns. With determination, wit, and aplomb, Harrington takes on the diets of notable celebrities — exercise regimes and all — and the results are often hilarious. We caught up with Harrington to talk food, celebrity, and the deliciousness of soaking raw almonds in water (who knew?).

EVERYDAY EBOOK: Why did you embark on this project?

REBECCA HARRINGTON: I originally embarked on the columns [Half of the essays in the book are excerpted from her column at New York Magazine. –Ed.) because I accidentally went on the diet of William Howard Taft. A friend sent me a sleep apnea website of his 1905 diet, and I thought, “What if I went on that for literally no reason?” It turned into going on the diet of a famous person, so then I went on the diet of Liz Taylor, and that’s when it was born.

EE: How did you choose which celebrities?

RH: I chose interesting celebrities who had really weird diets. For nearly every celebrity, you can find out what their diet is. If you google any woman and put “diet” next to it, you have a million diets to choose from. So I cherry-picked the ones most known for their diet or outrageous personalities. Diet is a very public part of things and always has been; it’s a weird aspect of culture. You don’t really think about it unless you’re reading Elle Magazine, just how much people love kale.

EE: Any favorite snacks or meals you discovered?

RH: Gwyneth Paltrow recommends soaking raw almonds in water as being really good for digestion. It gives them this delicious vanilla-y flavor and the casing comes off. You know how you eat them with nothing on them and there is a kind of gross weird bitterness? Soaking them (for about four hours or overnight) takes all that away. Go Gwyneth!

EE: What kind of research did you do for the book?

RH: You have to do a lot of research to get the perfect funny anecdote. I read almost every published work about them … every public utterance, their entire Instagram and Twitter feed [Harrington recommends Madonna’s. –Ed.]. Some of these people had (or have) very long careers so it’s interesting to go back and see what was said at different times. I got to watch a ton of old Liz Taylor movies. I read Furious Love, an amazing book written recently about Taylor’s relationship with Richard Burton and the private correspondence she saved. It’s the best thing in the world; I gave it to my sister and she cried.

EE: Do you have a favorite celebrity diet? One that you disliked the most?

RH: Karl Lagerfeld was a little easier because he’s so funny. He’s a hilarious guy, so there’s a lot to pull from. In any interview, there are ten quotable amazing lines. I hated Greta Garbo’s diet — it was inedible [At one point in the book, a dish in the Greta Garbo chapter is described as, “If pneumonia was a food this is what it would taste like.” –Ed.]. Gwyneth Paltrow’s diet is one of the best things I’ve ever heard of in my life — if you’re a millionaire. That’s the only barrier (and it’s a big one).

EE: Did you learn anything that surprised you?

RH: You end up feeling bad for the celebrities. It’s a lot of work. You kind of do this as a woman, but not really, not to that level. It’s kind of like being a woman on steroids.

EE: Anything you’ve taken with you from the experience?

RH: I drink a lot of green juice. I never used to care about green juice at all; now I think about it all the time: “I better start my morning this way.” I don’t even like it that much, but it makes me feel virtuous. Like, now I can go eat a whole pizza.

EE: You often joke about losing friends through this endeavor. Do you still have friends?

RH: They’re dead. Just kidding, they’re fine! But I do have to trick them now into coming to dinner parties. They probably liked Gwyneth Paltrow’s fish tacos the best, and they definitely hated Madonna’s macrobiotic stuff. That was so bad. Society-wise it was really tough. Nobody wants to go out with a person and have that person say, “I have to get boiled sole and there’s no other way around it.” That is insane. It makes you unpopular.

EE: What do you like to eat, celebrity diets aside?

RH: Flavored popcorn. Caramel popcorn. I really like chips. I just had a pizza today, and I loved it.

EE: So lots of celebrity-approved stuff?