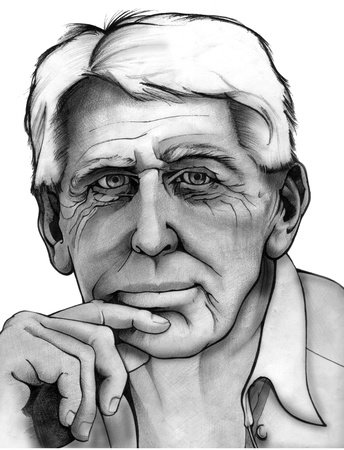 Gregory Mcdonald was born on February 15, 1937, in Shrewsbury, Massachusetts. He attended Harvard University, having been accepted at the age of sixteen, but insists his real education came through the international yacht troubleshooting business he created and ran to support himself at Harvard. Described by critics as the inventor of the sunlight mystery, Mcdonald has published twenty-six books – fifteen of which are mysteries. Mcdonald’s first book, Running Scared (1964) was hugely controversial when it first came out, because of its argument for rational suicide and its critique of the Ivy League and its complementary institutions for their role in creating a cold, dehumanized, and self-destructive society. The reaction so shocked Mcdonald that it took him ten years to publish his next book. Seven of those ten years, from 1966 to 1973, were spent working at the Boston Globe as a columnist, critic, and contributor to the paper’s Sunday magazine. While at the Globe, Mcdonald became the first member of the major media to write against the Vietnam War. Mcdonald was also among the first American journalists to write in support of civil rights, women’s rights, and gay rights. For these efforts, he has received humanitarian and people’s rights awards. In 1974, Mcdonald introduced the character I. M. Fletcher, who would become an iconic figure in American popular culture, in his book Fletch. This work won the 1975 Edgar Allan Poe award from the Mystery Writers of America. In 1976, Mcdonald published its sequel, Confess, Fletch, which won the Edgar in 1977, marking the only time the award has gone to a novel and its sequel. Mcdonald’s books are comprised mostly of dialogue. A self-described post-cinematic writer, he believes that readers have been exposed to so many images through movies that long, descriptive passages are unnecessary to set scenes. This is only one of many aspects of Mcdonald’s writing that make his books unique and groundbreaking.

With his signature character Fletch, Gregory Mcdonald created one of the best-known figures in crime fiction. Sexy, smart (some might say too smart for his own good), witty, and resourceful, Fletch finds himself in and out of predicaments that your average guy would avoid like the plague. The nine Fletch novels, originally published between 1974 and 1986, have been one of the most successful mystery series of all time, selling 100 million copies worldwide. They were also the basis of two successful films starring Chevy Chase. In addition to the Fletch series, Gregory Mcdonald is the author of numerous other mystery novels, including two Son of Fletch novels and three featuring Inspector F. X. Flynn. He died in 2008.

Souvenirs of a Blown World