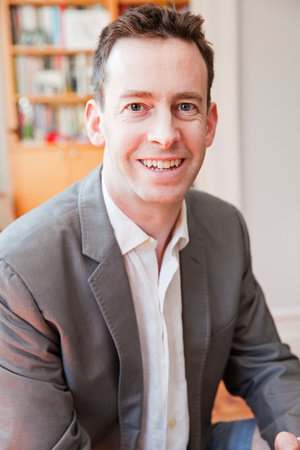 Zachary Roth is a national reporter for MSNBC. He was born and raised in London and lives with his family in Brooklyn.

In Pennsylvania and a handful of other closely divided states, Republican legislatures drew congressional maps to maximize the number of Republican seats by concentrating as many Democrats as possible into as few districts as possible. It’s one of several tools that Republicans have successfully employed to maintain majorities despite a shrinking share of the electorate.

In The Great Suppression: Voting Rights, Corporate Cash, and the Conservative Assault on Democracy, MSNBC reporter Zachary Roth details the successful Republican strategy to limit voting, maintain congressional majorities with gerrymandering, and allow unlimited spending in elections. Roth sat down with Penguin Random House to talk about the book.

PENGUIN RANDOM HOUSE: The book is about how the U.S. political system is structured in ways that make it undemocratic. Are there some of those elements that you think largely fly under the radar?

ZACHARY ROTH: There are a couple of things. There are state-level preemption laws that have barred cities from passing legislation to raise the minimum wage, to require employers to provide paid sick days, to prevent fracking. In Denton, Texas, citizens ran a campaign to get a fracking ban on the ballot and it overwhelmingly passed, so they thought they had banned fracking in the city. The oil-and-gas industry got the Texas legislature to pass a preemption law that banned local governments from regulation of fracking, and then made it retroactive. It was a real blow to local democracy.

PRH: Have municipalities found a legal mechanism for pushing back?

ZR: There’s an Alabama case about a local minimum wage where they’re trying to push back. They filed a lawsuit under the Voting Rights Act that taking away a majority-black city to pass the legislation was racial discrimination against black voters. It’s a novel use of the Voting Rights Act, and there hasn’t been a ruling on it yet.

PRH: There’s a lot about voting rights in the book, and I wanted to ask why the battle has been over registration issues rather than eliminating the requirement for registration?

ZR: The voter registration systems enacted in the 1830s and ’40s were a response to immigration by the Irish who voted for Democrats, so the Whigs created voter registration to depress the Irish vote. Today, there’s so much attention paid to voter ID laws that control voting at the polls, but much of the effort to make it more difficult to vote is on making it difficult to register to vote.

In Texas, anyone who registers voters has to go through a formal training process in a specific county, and they can only register voters in that county. There are other restrictions designed to make it more difficult to register voters at a time when Texas has 2 million unregistered hispanic citizens. Wisconsin has made voter registration more difficult. As far as I know, North Dakota is the only state that doesn’t require registration to vote.

PRH: Have you noticed an increased willingness by Republicans to acknowledge that there’s a political motivation behind making it more difficult to vote?

ZR: You see the veil slipping more and more. They’ve started acknowledging that it has a political effect, and some Republicans will say that it’s better if people who aren’t informed don’t vote. When Ted Yoho, who is a congressman from Florida, was campaigning for Congress in 2012, he would talk about the fact that you used to have to be a property owner to vote. He said giving uninformed voters the right to vote was as dangerous as a loaded gun.

PRH: Have you seen any indication from the Clinton campaign what a new Voting Rights Act would look like?

ZR: She has talked about a number of ways to expand voting — automatic voter registration unless you say you don’t want to be registered, expanding early voting to a minimum of twenty days, restoring the parts of the Voting Rights Act that were weakened by the Supreme Court in 2013. The momentum in the states has been moving in those directions.

PRH: If demographic shifts continue the way they’ve been going, do you think a lot of these things will get fixed democratically?

ZR: That’s hard to predict. In the short term, it could have the opposite effect as white conservatives become more of a minority, they could rely even more heavily on efforts to make voting more difficult to maintain their majorities.

PRH: What do you make of the fact that there hasn’t been much of an effort to institute campaign spending limits by a constitutional amendment?

ZR: It was an issue in the Bernie Sanders campaign and it’s something Hillary Clinton has talked about, but it’s extremely difficult to amend the constitution. I don’t know that it’s the most viable route to change Citizens United. The more hopeful development is public financing systems, which some states and cities have enacted. Those don’t generally run into the same constitutional problems because they don’t limit anybody’s speech or political spending. Seattle gives everyone a $25 voucher to contribute to the candidate of their choice.

PRH: Do you have some optimism that the Census coming in 2020 will be in a presidential year with higher Democratic turnout rather than a midterm year with low Democratic turnout as it was in 2010 will make it more difficult for legislatures in states like Pennsylvania, Michigan, Ohio and Wisconsin to draw heavily gerrymandered Republican districts?

ZR: It will make it harder for Republicans to control the process, and it could give Democrats a chance to do that. I don’t want to present Democrats as above gerrymandering for their own political gains because they’ve done it numerous times in the past. Some states have begun using nonpartisan commissions to handle the redistricting process to take it out of the hands of partisan legislatures.

PRH: Are you optimistic that things you’re concerned about are positioned to get better in the next several years?

ZR: I think it will be fits and starts. We’re going to continue to see voting restrictions in places where Republicans hold power. It’s plain as day that when more people vote Democrats do better and when fewer people vote Republicans do better. The voters deterred by these restrictions are much more likely to be Democrats than Republicans. You’re starting to see some outrage about voting restrictions that you didn’t see two or three years ago, and the more exposure this stuff gets the more hopeful I get.