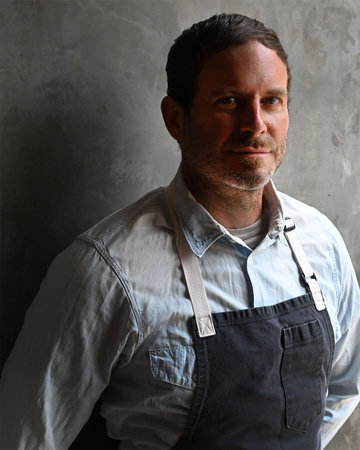 James Beard award–winning chef, author, and founder of Tartine, Chad Robertson double-majored in culinary arts and baking and pastry at The Culinary Institute of America in Hyde Park, NY. In 2002, Robertson moved to California, where he opened Tartine Bakery (with Elisabeth Prueitt) in San Francisco. Chad co-authored Tartine, the bakery book originally published in 2006, and the updated edition, Tartine Revisited, published in 2018. In between, he authored and co-photographed Tartine Bread and authored and photographed Tartine Book No. 3. In 2006, Robertson opened a second location, Bar Tartine, and subsequently photographed and produced a book by the same name together with co-chefs and authors Nick Balla and Cortney Burns. He eventually closed Bar Tartine in order to focus on Tartine Manufactory in San Francisco and expansion into Los Angeles and Seoul, South Korea. Robertson’s first four books were James Beard Foundation award nominees. Tartine now operates three all-day cafes each in San Francisco and Los Angeles neighborhoods along with a baking commissary in both cities and five all-day cafes plus two commissaries in Seoul. In addition, Robertson co-founded Coffee Manufactory, which directly sources green coffee beans from a small group of global farmers, mirroring Tartine’s end-to-end grain-supply chain, which he has built over years of working with West Coast farmers. In 2020, Robertson co-wrote and co-recorded his first original audio book on sourdough bread, together with his friend and Tartine’s longtime director of bread, Jennifer Latham. Robertson and Latham are currently collaborating on a new full-length cookbook that showcases their latest innovations and techniques in bread baking, which will be released in fall 2021.

Getting Started with Sourdough