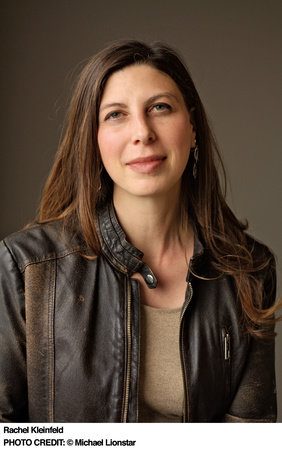 RACHEL KLEINFELD is a senior fellow at the Carnegie Endowment for International Peace and was the founding CEO of the Truman National Security Project. From 2011 to 2014 she served on the U.S. State Department’s Foreign Affairs Policy Board and regularly advises officials in the United States, the United Kingdom, and other allied governments. Kleinfeld is the author of two previous books and has been featured in The New York Times, The Wall Street Journal, Fox News, and other national television, radio, and print media. She lives in Santa Fe, New Mexico.

We had the chance to speak with Rachel Kleinfeld, the senior fellow at the Carnegie Endowment for International Peace and the founding CEO of the Truman National Security Project, about her latest book, A Savage Order, which discusses theories about war, crime, and foreign intervention. Read on to learn more about violence and law enforcement, how it applies to America today, and what we can do about it now.

PENGUIN RANDOM HOUSE: What are your opinions on law enforcement in America today? How do we, as a nation, maintain a sense of security while also preserving our humanity?

RACHEL KLEINFELD: Enforcing laws in a heavily armed society is a dangerous, difficult job. I have immense respect for those who choose to run towards danger in order to protect the rest of us.

When leaders provide impunity to violent or corrupt officers, or create a culture of disrespect for some communities, the work of good police becomes more difficult. People who feel preyed upon don’t provide intelligence to officers. Without good information, police can’t catch the worst criminals, and everyone is more endangered.

Under-policing is also a risk. In many violent countries, citizens assume that it’s okay for criminals to kill criminals, and for police to ignore those deaths and focus on the murders of “innocents”. But disrespecting any human life means that police get sloppy. In Mexico, for instance, despite the immense murder rate, police often assume that anyone who is killed is involved with the cartels. It’s an assumption I saw repeated in every country I studied – and it was always incorrect. As impunity rises, more and more innocent people die. When nineteen Mexican teenagers were killed at a birthday party in one of their homes, President Calderon at first assumed they were criminals. As those bereft parents know, security requires treating all human life as precious and deserving of dignity. Only by treating the worst among us with the presumption of innocence can we protect all of us.

PRH: What steps can be taken, on an individual level, to rebuild peace in our divided nation? Why is it vital to do so sooner rather than later?

RK: The countries I found that became the most violent were highly unequal, highly polarized democracies – like our own. But most of the violence hit those who were poor and marginalized. Middle class people could simply ignore it for a long time, knowing it wouldn’t affect them. To begin finding peace, people from those different groups had to first decide that they were part of the same community, with a shared fate.

Medellin, for instance, was Colombia’s most violent city. Years of meetings on how to fight the violence finally brought the divided populace together. It was a big step to meet – some trade unionists were supporting guerrilla terrorists, some business people were funding the murderous paramilitaries, so even shaking hands across that divide was hard. But they met, and talked, and after a few years of such meetings, a group of the right and left came together to form a new political party. They elected a mayor who both increased security, and spent public funds on education, transportation, and other things that helped the poor. And the murder rate plummeted. That’s what needs to be done, before cycles of hatred and reprisal lead to dehumanization of ourselves and others.

PRH: How does a nation recover from extreme violence or corruption without responding with hatred towards a group of people?

The United States went through this cycle in the 1960s. After the Supreme Court demanded that schools desegregate, white “Citizens Councils” sprang up throughout the South, and many community leaders on the right became middle-class apologists for Klan violence. Lynchings, attack dogs, and mass imprisonment of tens of thousands of peaceful protesters ensued. The left responded with anarchist movements, terrorist groups like the Weathermen, vigilantes like the Black Panthers.  The murder rate started rising, and didn’t stop until the 1990s, when it peaked at nearly double the rate it is today.

To “recivilize”, societies have to start increasing trust in their government, and in their fellow citizens. That requires a dance between government and citizens. Citizens have to elect new leaders. Those leaders must commit to governing for all of their citizens. Then regular people begin to uphold peaceful behavioral expectations within their communities and self-police, working with the state to eradicate violence.

PRH: What distinguishes nations that recover from devastating violence from ones that are unable to do so?

RK: There are many ways countries can fail to recover. But two key attributes separated those that forged a path to security. First, society itself found a way to come together across divides of ethnicity, class, and other fissures, to demand that government treat all citizens fairly. Second, those social movements teamed up with politicians who were willing to use tough measures against violent groups while having zero tolerance for state brutality. Those politicians governed for all their citizens equally, putting resources into the poor and marginalized as well as the middle and upper classes. The politicians weren’t perfect – and as they crossed the line into repression or other misuses of the state, citizens had to be willing to vote again for another set of leaders.

So recovering from devastating violence requires an active, vigilant citizenry that is willing to compromise and be pragmatic with imperfect politicians. And it requires skilled politicians willing to draw on ideas from the left and the right rather than being beholden to ideologies.

RK: Since the 2016 elections, the media seems unable to talk about anything other than Trump. It’s actually hard to find news about the rest of the world. But we have been through more divided times in our history, we have faced worse than this before. We are still a strong nation and we have power that we can use to create a more secure world.

That helps us as well as others – most of the immigrants that are causing such political fracas in the U.S., for instance, are fleeing violence in Central America. Better reporting on the causes of that violence could lead to real solutions, not just band aids at the point of immigration. Within violent countries, journalists are the canary in the coal mine – when countries tolerate violence against them, it is a good signal that a violent governing order has begun. So using our power to support and protect journalists is essential.

PRH: In reading about your theory of privilege violence, ‘The Handmaid’s Tale’ came to mind as an extreme example of the theory. Realistically, how in danger of falling prey to extreme and government-approved privilege violence is the United States today?

RK: Randolph Roth is a scholar whose book, American Homicide, traces murder across U.S. history. He found that violence rises when people loose trust in government and feel that the social order is illegitimate – a finding replicated by other scholars in other countries. Given the current zeitgeist, I am worried that violence may increase, and that the pipe bombs and Pittsburgh killings are harbringers of more to come.

However, violence would be rising from one of the lowest points in our modern history. The United States has not been this safe since the 1950s. We have succeeded in eradicating a great deal of government violence. In the 1960s, Mississippi’s state government supported its Citizens’ Council. In New York City in 1971, police killed someone in the line of duty every four days. Since then, the city’s police have used less deadly force and made fewer arrests and violence has declined for 27 straight years – its murders are down 85% since 1991. In Chicago, police tortured suspects for twenty years before being discovered, creating a legacy of distrust which plays a role in that city’s high levels of violence.

Whether we fall prey to a governing order in which the privileged hire private security while the government under-polices or violently polices inner cities, or whether we continue to become safer, depends entirely on our citizenry. Are we going to elect leaders who use divisive rhetoric to win votes, or are we going to change our voting systems so that moderates have a chance? Can we recognize that we are one nation, or are we content trying to keep ourselves safe and ignoring the security of our fellows? Those decisions will determine which way the country will go.

PRH: Who do you hope to reach with your book?

RK: I hope that members of Congress and their staffs, across both parties, will read it and support the Violence Reduction Act and other pieces of legislation. But I also hope to reach members of the public who want to help. In the last chapter I suggest ways we can all do better – such as not staying in mafia-owned hotels when vacationing in Italy. I also hope that U.S. readers will see the path our country is on and how bad it can get, and alter course.

Get more updates from Rachel Kleinfeld from her author site