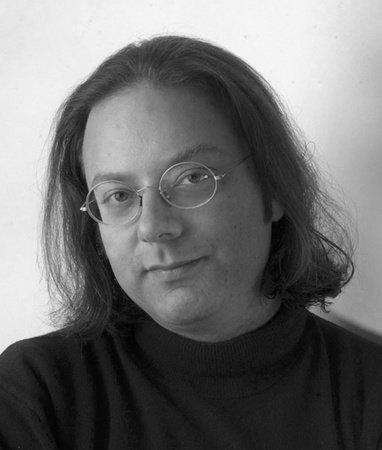 SF Said is one of Britain’s best young writers and has judged the Whitbread Children’s Book Award.

SF Said was born in Beirut, Lebanon, in May 1967. His family was originally from the Middle East—like his character Varjak, SF has Mesopotamian ancestors—but he has lived in London since the age of 2. SF thinks that growing up in the flat above Quentin Blake may be why he always wanted to be a children’s writer.

SF says that authors like Roald Dahl, Ursula Le Guin, and Rudyard Kipling made him who he is. Their books shaped his mind, as did all the comics and music he loved, from Star Wars to The Sandman. His flat walls are covered with books, records, and videos—literally thousands of them.

Varjak Paw is SF Said’s first published novel, although he has written other books, which weren’t published. While trying to be discovered as a writer SF spent 6 years in Middle East Politics, writing for the Crown Prince of Jordan. Following this, he went to Cambridge University to do a PhD in Criminology. During his degree SF started writing articles about books and films which won him national journalism prizes. He now writes for the Daily Telegraph and has interviewed the likes of Philip Pullman, Jacqueline Wilson, Quentin Blake, and William Nicholson. His success as a journalist has led him to judging the Whitbread Children’s Book Award and programming for the Edinburgh Film Festival.

Throughout his time as a journalist SF has been working on his own children’s books and says that he takes this more seriously than anything in his life. He says of his novel Varjak Paw, “Some people find it strange when I say it took 17 drafts to get Varjak Paw right. 17 drafts? Isn’t that a lot? But George Lucas did 100 drafts of his first Star Wars script. Hemingway rewrote constantly. I take my story as seriously as they took theirs. Those 17 drafts were about making the storytelling totally addictive, trying to give it the depth of a timeless, classic myth. For me, this is a book about being small in a big world, but learning that you’re more than you think you are. I’d like to think that if you can read, you’ll get something out of it, whoever you are.”

“Imagine The Karate Kid directed by David Lynch. . . . Although relatively dark in tone, Varjak Paw has an almost relentless mixture of thrills, spills and adventure.”—Bookmunch