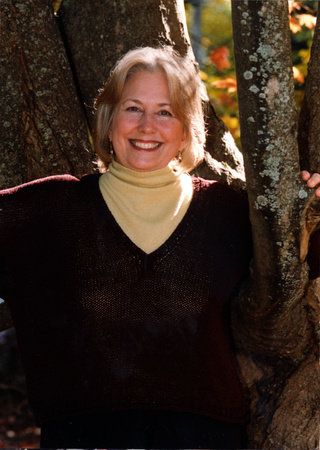 Elizabeth Cox is the author of Night Talk, The Ragged Way People Fall Out of Love, Familiar Ground, and the story collection Bargains in the Real World. She is an instructor at the Bennington Writing Seminars and teaches at Wofford College in South Carolina, where she shares the John C. Cobb Endowed Chair in the Humanities with her husband, C. Michael Curtis. She lives in Spartanburg, South Carolina.

I was raised in Chattanooga, Tennessee on a hill that overlooked the Tennessee River, Williams Island, and three mountains. My home was set in a bowl of mountains. Every morning when I awoke, my first act was to look out at the mountains, island and river. The vision became so much a part of me that for years (no matter where I lived) when I woke I looked out the window; and though what I saw was different, what I really saw in my mind’s eye was that river and the island and morning shadow on the mountains. Whenever I write about mountains or rivers, these images from my childhood are what I see.

I did not start writing until I was in my early thirties. My children were in school, and both of my brothers had published books of poetry.

So I wrote poems and short stories and entered the MFA program at UNC-Greensboro. After I attended a writers’ conference in Saranac Lake, NY, an agent encouraged me to write a novel. “Sure,” I said. Truth was, I had no idea how to write a novel. When I returned home ( by then, Durham, NC), I enrolled in a Duke University course in the sonata and symphony. I listened to sonatas or symphonies by Dvorak and Beethoven; and even though I never applied my knowledge directly, I kept an arc of the music in my mind as I wrote — remembering the ways in which a symphony could build and fall, or noticing the statement, development, and reiteration of a sonata form. Contrapuntal aspects in music made me aware of contrapuntal forces between characters.

I wrote my first novel listening to music.

For my second novel I took an astronomy course, and read physics. For my third novel I studied biology and books on nature.

While writing The Slow Moon I listened to Blues- B.B King, Bobby Brown- and though studying one thing in order to understand another might seem odd, I found that this process added a richness to my life, as well as to my narrative strategy. It also offered ways to surprise me into getting at “what’s true.” To me, fiction is a powerful way of telling the truth – more powerful, I think, than factual accounts. Story offers a peripheral vision different from the regular way of looking at the world or at human nature. Stories show us something by telling us to look somewhere else.

When I lived in NC I went to the planetarium in Chapel Hill as often as I could. One night I saw a comet, and though it was almost too far away to be noticed, it could be seen without a telescope – a faint light moving across the sky. I had trouble seeing it, and tried to focus exactly where people were pointing. Then someone behind me said, "If you look straight at it, you won’t see it. You have to turn your head slightly and see it in your peripheral vision." When I did, I could see the comet’s light and its movement across the sky.

Stories are like that. They present truths about human nature by focusing on a character as he/she moves through life reacting to other characters until we see a pattern, feel a connection.

The moment I could see the comet in my peripheral vision, my impulse was to turn and look at it directly. When I did, I lost it. So I turned back again, and repeated the mistake several times before learning the lesson of that kind of vision.

Very often concepts such as love, hope, hate, and fear are best seen in this peripheral vision, and in speaking of them directly we can lose sight of them. Knowledge presented through the imagination is different and more subtle than the knowledge of the intellect – requiring the presentation of an experience to create understanding. Fiction requires the creation of an experience.

In his book The Song Lines Bruce Chatwin describes Aboriginal people moving through Australia singing a path across the continent. Aboriginal Creation Myths describe legendary beings who wandered over the continent (in the Dreamtime – Past) singing out the name of everything they encountered (birds, animals, plants, rocks, waterholes) and, in doing so, singing the world into existence as they approached it.

Each being, while traveling, scattered a trail of words and musical notes along a line of footprints, and these dreaming-tracks became ways of communication between far flung tribes.

If you knew the song, you could follow the map.

In theory the whole of Australia could be read as a musical score- hardly a rock or a tree had not been sung. One could visualize the song lines as winding paths of Iliads or Odysseys — journeys where distance could be measured as a stretch of song.

I don’t understand (logically) how this method works, how songs became a map, but for the aboriginal man or woman the melodic contour of song described the nature of the land over which the song passed.

In this same mysterious attentiveness, I listen to music- sonatas or concertos, symphonies or blues – and try to find the path, the journey of a story’s form. At other times I turn to nature seeking formations or maybe the organic development of physical principle, and in the process learn something similar in human interaction.

Sometimes (when teaching a class) I make an assignment like this: Study and describe the process of Photosynthesis or the Principle of Indeterminacy or the formation of a Black Hole. Tell a story with a plot line similar to that organic principle. Apply the process to human interactions. My hope is that the assignment will open the mind to the physical and organic processes of everyday life and reveal similarities in human behavior. (For instance, the Principle of Indeterminacy states that finding a measurement of something in motion inevitably changes what is being measured: A man who loves his wife is asked repeatedly by her, “Do you still love me? Do you still love me?” until the answer is “No.”)

As I write my next novel, I listen to (and study) the fugue. And though I have hinted here at what I do, I still resist looking too closely at my process,or especially trying to analyze the specifics. One is so different from the other- like the difference in talking about making love and doing it.

Annie Dillard once said, in Pilgrim at Tinker Creek: “I had been my whole life a bell but never knew it until, at that moment, I was lifted and struck.”

Everyday I aspire to be that bell – everyday to be lifted, struck by all that lies around me.