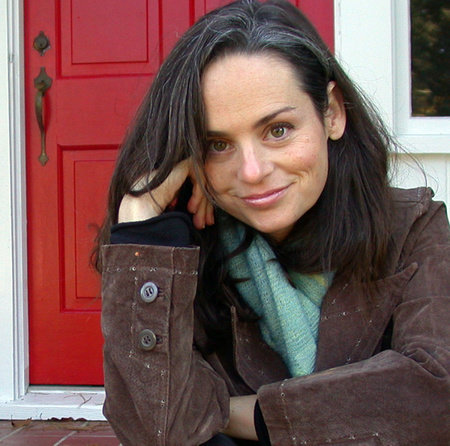 Julianna Baggott grew up in Delaware — also known as Dull-a-were, because not much goes on there, and sometimes called Dela-where? because a lot of people don’t know where the state is exactly. To combat boredom as a child, she invented other worlds — one of the things that led her to become a writer.

Oh, but there are other things besides boredom combat that led her to become a writer. She was also eavesdroppy as a child, which made her a very keen listener. She also was a little prone to fibbing, which is really just the imagination at work. She was also a motor-mouth, which means she really loved words (the true currency of a writer). She was also big-eyed, which doesn’t necessarily mean she was observant but she did try to observe things with her big eyes closely. She was also a collector of odd things – like a barrette with bubblegum stuck in it that looks like Abraham Lincoln if you hold it just right and observe it closely with big eyes. She also hailed from a strange family which is a trait that everyone shares. (All families are strange. It’s part of the definition of family.) She was also a jotter of notes about things she eavesdropped, fibbed about, motor-mouthed about, observed closely, collected weirdly, and, of course, she always jotted about her strange family and still does.

She is now the author of sixteen books. She began publishing when she was twenty-two and sold her first novel while still in her twenties. There are over thirty foreign editions of her novels to date, which means there are books with her name on them that she can’t even begin to read. Her novels for younger readers include The Ever Breath and The Prince of Fenway Park, as well as titles written under her pen name N.E. Bode, most notably The Anybodies trilogy. (N.E. Bode attended the Alton School for the Remarkably Giftless where he won the award for Least Gifted.) As Bode, Julianna has been a recurring personality on XM Radio – XM Kids.

She has also published literary novels for adults – who, frankly, aren’t as interesting as kids. These novels include national bestseller Girl Talk (2001), The Miss America Family (2002), The Madam (2003), and Which Brings Me to You co-written with Steve Almond. (She does not recommend co-writing books and neither does Steve Almond.) Her recent novels The Pretend Wife (2009) and My Husband’s Sweethearts (2008) were published under her pen name Bridget Asher.

Julianna also writes collections of poetry which seem like they should be easier to write because they’re much smaller but, oddly enough, they’re quite hard. Still and all, she does recommend writing poems. She’s published three collections of poetry — This Country of Mothers, Lizzie Borden in Love, and Compulsions of Silkworms and Bees.

Julianna’s work has appeared in over a hundred publications, including the The New York Times, Boston Globe, Glamour, Ms., Real Simple, and read on NPR’s Here and Now and Talk of the Nation.

She lives in the swamplands of Florida with her husband writer David G.W. Scott and their four rambunctious kids. Florida is not dull but this new family of hers is strange, as all families are (like I already said!). She’s a professor currently professing at Florida State University’s Creative Writing Program. Along with her husband, she co-founded the nonprofit organization Kids in Need – Books in Deed, that focuses on literacy and getting free books to underprivileged children in the state of Florida.