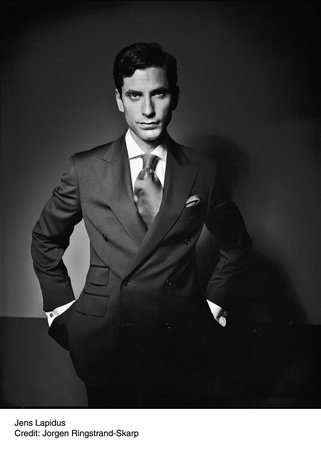 Jens Lapidus is a criminal defense lawyer who represents some of Sweden’s most notorious underworld criminals. He lives in Stockholm with his wife.

Jens Lapidus has been hailed as the next Stieg Larsson and from his electrifying crime novel, Easy Money, it is clear why. Lapidus’ gritty story is set in Stockholm and depicts an underworld of Euro-mobsters and their unending desire for drugs, power, cash, and revenge. Connected with this sinister set is a group of rich, young things on the party scene, and it would appear a penchant for violence does not discriminate whether you’re wearing Prada or prison couture. Our narrators are the criminals from both of these worlds, who expose a tangle of double lives and double-dealing. As they risk everything, we fall into their shadowy world and experience a taste of their intoxicating ride.

I began wondering what made the author create such disturbingly despicable yet somehow sympathetic characters. Luckily for me, Jens Lapidus took the time to answer a few of our burning questions about what went into the making of this novel.

PENGUIN RANDOM HOUSE: Why did you decide to tell this story from the perspectives of the criminals rather than taking a more traditional route where we follow a detective unraveling a crime?

Jens Lapidus: I want to expand the borders of the traditional Scandinavian crime fiction. I figured that since we have people in Sweden for whom committing crime is something natural, and a part of their lifestyle, it must be fascinating to see crime from their eyes. In my job as a defense lawyer, I encounter a lot of people from the Stockholm underworld, and I wanted to tell their story; I wanted my readers to get into the heads of people they rarely understand. This approach received an enormous response among the reading public in the Scandinavian countries and many other countries around the world.

PRH: Both the glittering nightlife and the seedy underworld seem extremely authentic. What kind of research did you do?

JL: I get a lot of my research for free, from my job. Having said that, the client-attorney-privilege is a holy principle to be upheld. This means that there are many stories I will never be able to tell. It also means that in the future I might find it impossible to continue to write the tales from the Stockholm gutter the way I do. Then I am thinking of switching to … I do not know … love stories, perhaps?

PRH: The characters of JW and Jorge both have sisters who motivate them. What made you choose the role of sister as the most influential woman in each of their lives?

JL: Family is always important, whether you are a tough gangster or an upcoming drug dealer striving to make it in the posh inner city of Stockholm. I also wanted to show how family relations may be severed by a criminal lifestyle.

PRH: Characters with dual natures surface in this novel. For instance, Mrado is the murderous muscle who is also a tender, loving dad. Do you think good and evil can exist simultaneously?

JL: Yes, I do. I do not believe in monsters or angels, black or white. All human beings are somewhere in between. That is not to say that all are the same, but that when you go deeper into a character a more complex personality will emerge. It is simply about human nature.

PRH: Your novel depicts Swedes as being biased against non-Swedes. Is this an accurate portrayal and is Stockholm as dangerous as your book (and Stieg Larsson’s works) makes it seem?

JL: To some extent there is an indirect structural racism in Sweden. The formal laws and the authorities are not racist, but you will definitely have a more difficult time finding a job if you are born in Somalia than in Gothenburg. Stockholm is like most major European cities — it can be dangerous and there are a lot of problems with drugs, violence, and prostitution. Having said that, I still believe it is a relatively good and safe place to live. The Russian journalists I met a couple of months ago said: “You are describing organized crime in Stockholm. It is all quite cute.”

This book translates perfectly to the big screen. Check out the Swedish film, Snabba Cash, coming soon to theaters. Watch the trailer here.