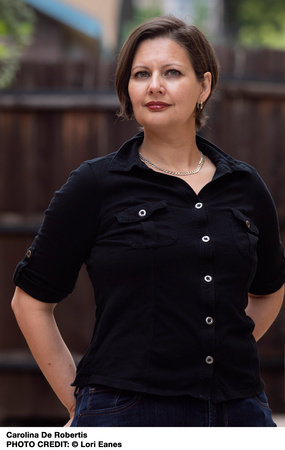 CAROLINA DE ROBERTIS is the author of five novels, including Cantoras, winner of a Stonewall Book Award and a Reading Women Award, and a finalist for the Kirkus Prize and a Lambda Literary Award; it was also selected as a New York Times Editors’ Choice. Her work has been translated into seventeen languages and she has received a National Endowment for the Arts Fellowship, Italy’s Rhegium Julii Prize, and numerous other honors. An author of Uruguayan origins, she teaches at San Francisco State University, and lives in Oakland, California, with her wife and two children.

The President and the Frog

The Gods of Tango

PENGUIN RANDOM HOUSE:In your new novel, The Gods of Tango, your main character Leda is a stranger in so many ways: She emigrates from Italy to Argentina, where she is a stranger to Buenos Aires, the language, and to the male world she slips into. You beautifully track her feelings as an outsider and also the human commonalities she encounters. Did your own experience living in several different countries affect this?

CAROLINA DE ROBERTIS: Thanks for the kind words — and yes, absolutely. I’ve been an immigrant ever since I was in the womb. I’ve never lived without the sense of being an “other,” of home being a place that is far-flung and beyond reach. There can be a sense of invisibility, even loneliness, that comes with this kind of territory; and yet, it can also carry a strange sense of freedom, at times — the freedom of the outsider, to shape your identity on your own terms.

In this book, I wanted to explore the various layers of this kind of experience. Such themes are extremely relevant in our contemporary world, in which migration is such a common phenomenon across the globe that it is verging on becoming a new norm, and cultures are less static and more multivalent than ever.

PRH:When Leda first came to you, did you envision a girl, Leda in men’s clothes, or the male musician, Dante?

CDR: Leda came first. I’d long wanted to write my way into the story of my great-grandmother, who immigrated to Buenos Aires from a small Italian village in the early 1900s, to marry her cousin. I also knew that, with the tango filling that city with its early, unvarnished culture, I wanted the book to plunge into that world.

It soon became clear that, for my protagonist to explore her hunger for the tango and for freedom, her trajectory would have to be very different from that of my own great-grandmother, who devoted her life to the hard work of keeping her children fed on meager pesos. Leda, as a character, quickly took the reins of the story, and then there was no question about what she would do to gain access to her new life: women had little freedom in that time and place, and so of course she would seek that freedom in the guise of a man.

PRH:You show us a very patriarchal society in The Gods of Tango. Leda both accepts these social norms and is astonished at the treatment of women, particularly prostitutes. Did you purposely choose for her to have those revelations after she began living as a man?

CDR: I don’t think Leda discovers sexism for the first time while living as a man, but she’s certainly exposed to new layers of it. Before her transition, she couldn’t enter brothels or seedy cabarets without becoming branded as a prostitute herself. As a man, Leda not only can enter those spaces, but must do so in order to avoid the suspicion of her fellow musicians, who pressure her to join them. It’s then that she comes face-to-face with the way men treat prostitutes. Since she’s playing the role of a man, she’s complicit with those men, especially because she is genuinely attracted to those women. At the same time, because she grew up female, she is unable to divorce herself from empathy; she sees the way these women are exploited, and can’t objectify them the way her comrades do. So she’s faced with a very complicated erotic and gender landscape, riddled with dangers and desires.

PRH:How does The Gods of Tango tie in to all the recent news surrounding LGBT rights and Women’s advancement? Is your novel at all part of a larger statement?

CDR: The U.S. has seen incredible gains for LGBT rights in recent months, from the increased visibility of transgender experiences to the Supreme Court ruling affirming gay marriage as a constitutional right. Personally, as a queer woman who’s been married for thirteen years, it’s been dizzying to experience these tectonic shifts in the culture. When I started writing this book five years ago, the cultural landscape was far different, and this narrative felt like a risky move, a voice very much from the margins. Still, it demanded to be written.

This may sound obvious, but it’s worth remembering that neither Caitlyn Jenner nor the Supreme Court created the movement for queer rights and dignity. It’s a much older movement, composed of millions of brave acts and risks and sacrifices, over generations, throughout the globe. Too often, these parts of history have gone untold. If The Gods of Tango can help fill that void, even in the mind of one single reader, I will be a happy woman.