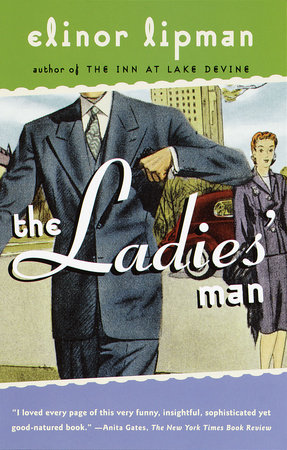 The questions, discussion topics, and author biography that follow are designed to enhance your group’s reading of Elinor Lipman’s novel The Ladies’ Man. We hope that they will provide you with new ways of looking at and talking about one of Lipman’s most successful romantic comedies. Like The Inn at Lake Devine, The Ladies’ Man is a mischievous tale of tangled love and second chances–an enormously rewarding story with a winning mix of appealing heroines, vivid writing, and wickedly funny social commentary.

Nineteen sixty-seven was a defining year for Adele, Lois, and Kathleen Dobbin. That March, Harvey Nash failed to attend the party at which he and Adele were to announce their engagement. Thirty years later, the three sisters—graying, stolid, content (albeit lonely)—blame him for what unkind relatives refer to as their spinsterhood. But late one cold April night, the buzzer sounds at the Dobbin sisters’ apartment. It is Harvey, in out of the blue from the west coast—where he’s reinvented himself as Nash Harvey, composer of jingles—to apologize.

After Kathleen greets Harvey by hitting him over the head with a casserole dish, the Dobbin sisters find themselves in the awkward position of having to look after him for a spell. Older, seemingly filled with regrets, still as charming and arousable as ever, he becomes a catalyst for the untried and the long overdue in the three women’s lives—though surely not in the ways he might have hoped. Level-headed, cautious Adele, who works for a public television station, finds herself flirting with her boss on the air during a campaign drive. Kathleen, the shy owner of an elegant lingerie boutique, seduces Lorenz, a sweet, unassuming doorman who lives with his father. Lois, the only Dobbin to have embarked on the road to matrimony (and subsequently, divorce) dusts off her girlhood notion that Harvey abandoned Adele rather than indulge his preference for another member of the family: Lois herself.

Meanwhile, Cynthia—a bright, sophisticated woman Nash seduced en route to Boston—discovers that Nash is not the man she had hoped he was. And Dina, Nash’s jilted lover back in California, gets into a fender-bender with a handsome stranger. If she plays her cards right, she may land the man of her dreams (or at least a competent sperm donor). And if she doesn’t, there may be an opportunity to get Nash back. Sharp, sexy, unfailingly funny, The Ladies’ Man is a charming look at modern American sensibilities and the timeless pursuit of love.

1. Harvey Nash is certainly not the kind of man with whom most women would choose to become involved. Yet despite his oily loyalties, arrogance, and opportunism, he charms nearly all of the characters, to some degree, at some point in the novel. How does Harvey—now called Nash—make his way into Adele, Kathleen, and Lois’ good graces? How does he maneuver his way into the arms of an intelligent, beautiful, and successful woman like Cynthia? What is it about this type of man that continues to be attractive to women and despite their better judgment they continue to succumb to his charm?

2. To what extent does the notion of good manners prevent the Dobbins from getting rid of Nash? To what extent are all three—on some level—curious about him?

3. How does fear threaten each female character’s ability to act on her attraction to others? How does Nash confirm their fears? How does his behavior play a role in diffusing their fears?

4. How are the Dobbin sisters’ loyalties to one another threatened by Nash’s reasserting himself into their lives?

5. What role does Richard Dobbin play in the novel?

6. Perhaps one of the most hilarious scenes in The Ladies’ Man is Cynthia’s big party for Nash. How do the events leading up to the big night infuse each guest’s entrance with tension? How does dialogue up the ante once the party begins?

8. Nash performs one notable and noble act in The Ladies’ Man: he makes Marty Glazer jealous. What prompts this act of selflessness? Is it completely selfless? If not, how does his gesture endear him to us nonetheless?

9. How does Elinor Lipman keep us interested in so many different characters over the course of the novel? Were there characters you cared about more than others?

10. How do the characters in The Ladies’ Man highlight different ways we approach—or shrink from—love today? What aspects of modern American culture make the pursuit of romance more difficult than in the past? What aspects make it easier?

11. Comparing The Ladies’ Man and The Inn at Lake Devine

1. Author Anita Shreve has written, "I have not read an American writer who can do what Elinor Lipman does: take a poignant situation and transform it, in a moment of instant recognition, into something as wryly perfect as a New Yorker cartoon." What issues does Elinor Lipman leaven with humor in both The Inn at Lake Devine and The Ladies’ Man? Why does humor work well in highlighting these issues in particular?

13. 3. Both The Inn at Lake Devine and The Ladies’ Man contain moments of tragedy. How are these moments treated in each novel?

14. 4. Which plot twists in each novel surprised you the most? Were the surprises believable? If they were not altogether believable, did it matter to you? Why or why not?

15. 5. In both The Inn at Lake Devine and The Ladies’ Man, Lipman’s characters find themselves in awkward social situations—for example, Natalie’s confrontation with Mrs. Berry, Adele’s discussion with Cynthia.) How do Lipman’s heroines behave in these exchanges? Why do you suppose Lipman chooses to place them in these situations?

16. 6. Love can seem elusive—especially to intelligent, independent women over thirty. In a 1986 article that rocked the nation (and prompted a pointed response in Susan Faludi’s Backlash), Newsweek asserted that a forty-year-old unmarried woman was more likely to be killed by a terrorist than to make her way to the altar. How difficult is it to find love in modern America? How do Elinor Lipman’s novels—charming, realistic, intelligent—restore our hopes?

Elinor Lipman is the author of six works of fiction—all in print—including the bestselling Isabel’s Bed, a collection of stories, and The Ladies’ Man. Writing about The Inn at Lake Devine for The New York Times Book Review, critic and author Lore Dickstein said, "Like an inspired alchemist, Lipman has converted serious subjects into humor in her previous novels as well: the rights of birth mothers in Then She Found Me, interracial dating in The Way Men Act, and sexual politics in Isabel’s Bed."

Born and raised in Lowell, Massachusetts, Lipman graduated from Simmons College, where she studied journalism and began writing fiction in an adult education workshop at Brandeis University (10 weeks/$40). Her first short story was published in 1981 in Yankee Magazine, and her first book (stories: Into Love and Out Again) was published in 1987. She writes essays and book reviews when prevailed upon (The New York Times, The Boston Globe, Self, More, Salon), but prefers to devote her time to novel-writing. Then She Found Me, The Way Men Act, and The Ladies’ Man are all in development as movies. She describes herself as overly fond of coffee, the telephone, e-mail, cookbooks, yarn stores, cable news, and reading. Her husband and teenaged son agree.
Learn More About The Ladies’ Man
print

Man of the Month Club

A Version of the Truth

If You Were Here

How Perfect is That
Back to Top