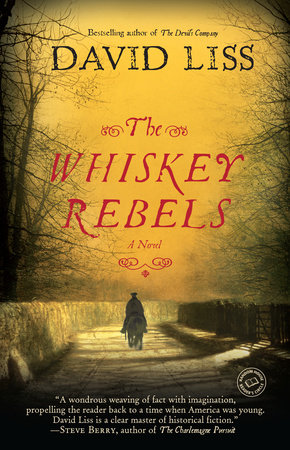 1. Andrew Maycott believes “The American novel, if it is to be honest, must be about money, not property. Money alone– base, unremarkable, corrupting money” (page 30). Do you agree? By his definition, is The Whiskey Rebels an American novel? Why or why not?

2. Captain Ethan Saunders implores us, “Look beneath and you may find several things that surprise you” (page 63). If we take Ethan’s advice and look beneath or past his scheming, his impropriety, and his status as a “ruin of a man,” what do we find? How and why are honor and reputation intertwined?

3. Through her reading, Joan Maycott discovers: “When my empathy for a character led me to weep or laugh or fear for her safety, I spent hours determining by what means the novelist had effected this magic. When I cared nothing for suffering and loss, I dissected the want of craft that engendered such apathy” (page 23). How does David Liss engender empathy or apathy for his characters? Did you sometimes feel both empathy and apathy for the same character?

4. En route to the Pennsylvania frontier, Phineas tells Joan “The West changes you. . . . I’m what the West made me, and you’ll be what it makes you” (page 84). Is this true? If so, how does the frontier change Joan? Phineas? What does this say about free will and choice in relation to place and circumstance?

5. Examine the characterizations and the roles of women in The Whiskey Rebels. What similarities do you find? What differences? Are they victims?

6. Mr. Brackenridge defines himself as a patriot– one who “does not make the principles of his country conform to his own ideas” (page 188). How else is patriotism defined or demonstrated in this book? How would you define patriotism? Who else in The Whiskey Rebels is then a patriot?

7. Thomas Jefferson, Alexander Hamilton, William Duer, and Joan Maycott have varied theories on the American economy, the Bank of the United States, and the excise tax. For instance, the Bank is either a great boon for the nation, a terrible disaster for the nation, or an opportunity to be exploited. Talk about their differing perspectives in relation to the events of The Whiskey Rebels. Who do you think is right? Do these debates continue today?

8. Discuss the principle of justice and its relation to revenge, integrity, inequality, and the law in The Whiskey Rebels. How does Joan Maycott justify her revenge against Alexander Hamilton?

9. Why does Captain Saunders not allow his slave, Leonidas, to purchase his freedom and later “simply neglect[s] to inform” him that he is a free man? What does liberty mean to Captain Saunders? Joan Maycott? Leonidas? Cynthia Pearson? The newly formed United States?

10. Lavien believes “It is only in the eyes of one another that inequality lies” (page 94). Who else, besides Lavien, serves as a moral arbiter in the novel? What examples of presumed superiority and/or civility can be found in The Whiskey Rebels? What examples can you find of an impossible tension between greed and civility, wealth and humanity?

The Last Town on Earth

Doc
Back to Top