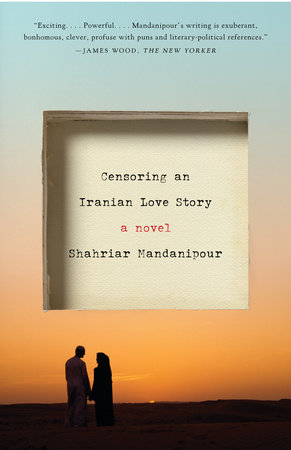 The questions, discussion topics, and reading list that follow are intended to enhance your reading group’s discussion of Censoring an Iranian Love Story, the first novel published in English by the award-winning Iranian writer Shahriar Mandanipour.

From one of Iran’s most acclaimed and controversial contemporary writers comes a dazzlingly inventive work of fiction. Censoring an Iranian Love Story opens a revelatory window onto what it’s like to live, to love, and to be an artist in today’s Iran.

The novel entwines two equally powerful narratives. A writer named Shahriar-the author’s fictional alter ego-has struggled for years against the all-powerful censor at the Ministry of Culture and Islamic Guidance. Now, on the threshold of fifty, tired of writing dark and bitter stories, he has come to realize that the “world around us has enough death and destruction and sorrow.” He sets out instead to write a bewitching love story, one set in present-day Iran. It may be his greatest challenge yet.

Beautiful black-haired Sara and fiercely proud Dara fall in love in the dusty stacks of the library, where they pass secret messages to each other encoded in the pages of their favorite books. But Iran’s Campaign Against Social Corruption forbids their being alone together. Defying the state and their disapproving parents, they meet in secret amid the bustling streets, Internet cafés, and lush private gardens of Tehran.

Yet writing freely of Sara and Dara’s encounters, their desires, would put Shahriar in as much peril as his lovers. Thus we read not just the scenes Shahriar has written but also the sentences and words he’s crossed out or merely imagined, knowing they can never be published.

Laced with surprising humor and irony, at once provocative and deeply moving, Censoring an Iranian Love Story takes us unforgettably to the heart of one of the world’s most alluring yet least understood cultures. It is an ingenious, wholly original novel-a literary tour de force that is a triumph of art and spirit.

1. What do you think are the aims of this novel? How does its unique structure reflect the ideas-and sometimes even the arguments-the author is trying to make?

2. The view of Iran with which we are typically presented comes straight from the newspaper headlines-a journalist imprisoned, a diplomatic quandary, issues surrounding the proliferation of nuclear weapons, and so on. How does this novel-a story of individuals trying to create art, to live and to love on a daily basis-challenge these snapshots?

3. How does the epigraph reflect the novel’s themes?

4. What did you think when you came to the first censored line? How did you approach these passages? How do they add to your understanding, as a reader, of what it’s like for a writer (or any other type of artist) to work under the constant threat of censorship?

5. Who is the narrator? Do you think his voice really represents the author of the novel, Shahriar Mandanipour-or is he a wholly fictional creation?

6. On page 8, the narrator says, “I, with all my being, want to write a love story.” How is the story of Sara and Dara a classic love story? How does it differ from the love stories you’re accustomed to reading? What other love stories do you see echoed in their tale?

7. The narrator lives in Shiraz-a city with a long, poetic history that provides him with inspiration-while Sara and Dara’s love story takes place in Tehran. Sense of place is important to this novel. How do the sections describing both cities help us to understand the characters and their attachment to their country?

9. Literature plays a key role in Sara and Dara’s relationship; they meet in the library and pass notes in their favorite books-The Blind Owl, The Little Prince, Dracula. . . Which of the literary works alluded to in the novel have you read?

10. The novel is full of Western pop culture references-from Danielle Steel to Kevin Costner, Linkin Park to Titanic. How do these add humor and sometimes even absurdity to the story? What effect do they have on the reader?

11. Beginning on page 35, the narrator interrupts the story of Sara and Dara to tell the reader of his first encounter with the censor Porfiry Petrovich: as a young writer, he had accompanied his publisher to a meeting with Mr. Petrovich in an attempt to get his first collection of stories approved for publication. As Sara and Dara’s story progresses, and as the narrator continues to write, Petrovich becomes an increasingly important figure in the novel. Discuss the relationship between Petrovich and the narrator. What does each get from the other?

12. In an aside about censorship on page 57, as he tries to write dialogue between Sara and Dara, the narrator says that the word “’thing,’ with its inherent ambiguity, can be interpreted as the most vile and libelous word in the Farsi language.” After reading the book, does this strike you as hyperbole or something else?

13. There are elements of what some might consider magical realism throughout the novel. How did they enrich your understanding both of Sara and Dara’s and of Shahriar’s stories?

14. Several supporting characters-the poet who died seven hundred years ago, the medicine man Jafar ibn-Jafri, the assassin, the army of Arabs-play important symbolic and sometimes also narrative roles in the novel. How do the story’s “real” characters relate to them? What do they tell us about the history of Iran and literature there?

15. On page 80, Dara, a former film major, says, “[T]he art of cinema can be even more powerful and more beautiful than literature”; we also see a blind censor screening Dances with Wolves and Scent of a Woman in order to decide which scenes should be cut. Compare film censorship with literary censorship as presented in the novel. How do they inform one another in this story?

16. Discuss the ghazal on page 123, written by the poet who had died seven hundred years ago-a real poet, by the name of Hafez:
They have closed the tavern door O God do not approve,
for they open the door to deceit and hypocrisy . . .

17. Discuss how the novel portrays the lives of women in contemporary Iran. What does the headscarf signify for Sara? In what ways is she trapped or constricted? How do the limits of her freedom compare to those placed on Dara, a former political prisoner?

18. Sinbad and Sara’s parents seem to offer to Sara a safe alternative to her relationship with Dara-yet Sinbad is ultimately a more complicated man than he appears. Compare Dara’s less affluent parents with Sara’s mother and father. Were you able to sympathize with either set of parents? How did your feelings about Sinbad change as the novel progressed?

19. Discuss the ways in which the narrator has learned to write around controversial topics-or topics that might be perceived by the censor as controversial: the ellipses he uses instead of finishing sentences or scenes; the metaphors he employs from the long tradition of Iranian literature; the stream-of-consciousness style he sometimes employs instead of writing realistically. How does reading about these methods, along with the crossed-out sections of the novel, affect your perceptions of censorship?

20. On page 221, at the end of the chapter “A Cobra at the Window,” as Dara wanders the streets of Tehran longing for Sara and is suddenly attacked in an alley, the narrator stops suddenly and says, “Ridiculous! I don’t need such a chapter in my love story. Please go ahead and delete this chapter that only a novice writer could perpetrate.” What does this chapter-and its potential absence-mean for both stories? What, here and elsewhere, is the effect on the reader when we are pulled out of the narrative and addressed directly? What about when the characters address the narrator directly themselves? How do these passages change our expectations of what a novel is supposed to be and of the roles reader and writer, protagonist and antagonist, are playing?

21. After Dara escapes the assassin, on page 266, the narrator says, “I feel the blade of a knife against my Achilles tendon.” To what degree is the writer responsible for the fates of his characters? In what sense do they take on a life of their own?

22. Discuss the fable of the damask rose, to which the narrator refers on page 279: in this old Iranian story, a beautiful girl who is kidnapped by a beast is rescued by a trail of damask roses that leads a young man to slay her captor. How does this story-and the other legends, myths, tales from Iranian cultural history-relate to Sara and Dara’s narrative?

23. Discuss the conclusion of the novel, which leaves much to the reader’s imagination yet in many ways (for example, with the return of the hunchback midget) feels very fitting.

Shahriar Mandanipour has won numerous awards for his novels, short stories, and nonfiction in Iran, although he was unable to publish his fiction from 1992 until 1997 as a result of censorship. He came to the United States in 2006 as the third International Writers Project Fellow at Brown University. He is currently a visiting scholar at Harvard University and lives in Cambridge, Massachusetts.

Crime and Punishment by Fyodor Dostoevsky; The Blind Owl by Sadeq Hedayat; The Complete Stories of Franz Kafka; The Unbearable Lightness of Being by Milan Kundera; The Selected Poems of Federico García Lorca; Reading Lolita in Tehran by Azar Nafisi; My Name Is Red by Orhan Pamuk; The Little Prince by Antoine de Saint-Exupery; Persepolis by Marjane Satrapi; Anna Karenina by Leo Tolstoy; One Thousand and One Nights.
Learn More About Censoring an Iranian Love Story
print

And the Word Was
Bruce Bauman

Gate of the Sun
Elias Khoury

The Children of the Ghetto
Elias Khoury

The Last Interview
Eshkol Nevo
Back to Top