Above the Thunder Reader’s Guide 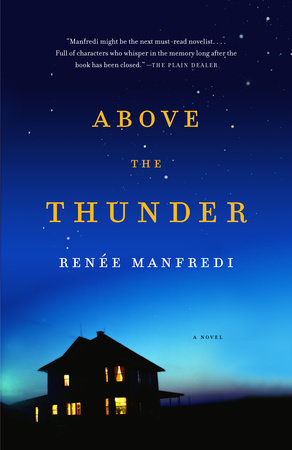 Above the Thunder Reader’s Guide

print
Above the Thunder Reader’s Guide

“Manfredi might be the next must-read novelist. . . . Full of characters who whisper in the memory long after the book has been closed.” —The Plain Dealer

The introduction, discussion questions, suggested reading list, and author biography that follow are designed to enhance your group’s discussion of the unforgettable Above the Thunder, an astonishing debut novel which explores the subtle, treacherous line between living and dying and captures in gorgeously rendered language the unexpected entanglements of the heart that can transform a life forever.

Devastated by the loss of her beloved husband and numb over the callous disappearance of her drug-addicted daughter, Anna has buried her grief in her medical work and wants nothing more than to be left blissfully alone. Yet when her son-in-law and the ten-year-old granddaughter who she has never met arrive on her doorstep, bereft and hoping to stay awhile, Anna’s world shifts irrevocably. Despite her attempts to maintain a protective distance from the newcomers, Anna is hopelessly beguiled by the child Flynn, whose dark and fanciful imagination thinly veils the scars of a damaging childhood.

Anna’s life takes another unforeseen trajectory when she meets Jack, an AIDS patient reluctantly participating in a discussion group Anna is coordinating. Engaged in a brutal, private struggle with his mortality—and the questionable choices that have landed him with the virus—Jack recognizes in Anna a conflicted soul and a kindred spirit. Soon the unlikely duo, with Flynn in tow, set up a makeshift home in rural Maine, in search of peace, renewal, and the opportunity for healing. Heartbreak hovers close, however. As Flynn’s obsession with death and reincarnation spirals toward a dangerous brink, Anna, Jack, and the friends they call family discover both the limits of devotion and the transformative power of tragedy.

Funny, wise, and often chilling, Above the Thunder offers an utterly unique take on loyalty, survival, the various incarnations of faith, and the ultimate search for home that drives us all.

1. As the novel opens, Anna doubts her own capacity for compassion: “Deep down she suspected that this trait, along with the maternal one, had never been activated in her. She doubted if it was possible to understand someone else’s suffering. Even her beloved husband whose pain had become a private geography on which she couldn’t trespass” [p. 21]. Is this cynicism or honesty at work in Anna? Do her relationships with Flynn and Jack change her aptitude for compassion and/or her ability to recognize it?

2. Above the Thunder is rich in symbolism, particularly surrounding Anna’s voyage to self-knowledge. What is the symbolic significance of her collection of antique hair pins? Her cell pathology slides? What does it mean when she randomly buys a collection of books about female hunters? Why does she have a penchant for dropping things? What other symbols does the author weave into Anna’s story?

3. What complex facets of motherhood—or the desire for it—does the author explore through the characters of Anna, Greta, Poppy, Leila, and Jane? What distinction does Anna draw between “maternal instinct” and “motherhood” [p. 116]? What different aspects of the concept of fatherhood are represented by Marvin, Mike, Jack, and Stuart?

4. Flynn’s point of view is introduced abruptly at the end of the fifth chapter. What does the reader glean about Flynn from this short, powerful passage? What foreshadowing does it contain?

5. The AIDS support group brings Anna into contact with Stuart and Jack. Is there more significance to the group than serving the plot? How does Anna’s involvement with the group affect her?

6. As Jack grapples with the mystery of who has given him the AIDS virus, he muses: “Mysteries and miracles, miracles and destinations, weren’t that far apart, in his view. The stricken and the blessed both followed the same path, faith the common point of origin. In the end, there was no difference between Bethlehem and the bathhouses” [p. 79]. What does he mean by “destinations” here? What sort of faith has led him to his dilemma?

7. How does the author weave subtle hints about reincarnation into the text to make Flynn’s prophecies more sinister and suggestive? What is Flynn’s vision of herself, Marvin, Poppy, and Anna in the next life? What behavior does Anna exhibit that seems to corroborate Flynn’s prediction about her?

8. Jack does not fear death but rather fears the possibility of continuing in the beyond: “Spirit without body was repugnant, desire no longer limited by the boundary of skin, expanding to fill the universe, love like sound waves going on forever, not stopped by the density of flesh. How could he ever keep track of himself when his margins were infinite?” [p. 198] In what way does this same fear plague Anna, as well as Flynn? Can it be argued that this is, in fact, the theme of the novel? How does each of these three characters handle this fear?

9. During a particularly alarming episode of Flynn’s irrational behavior, Anna begs the girl to always tell the truth: “You should never hide. Never hide the things that make you who you are” [p. 158]. Yet asking this promise of the child fills Anna with an inexplicable sense of dread. “The truth—whatever Anna meant by it, and she didn’t quite know now—was likely to deliver her granddaughter into the hands of the enemy” [p. 159]. What are the possible meanings of the word “enemy” in this context?

10. What is the significance of the Mahatma Gandhi epigraph, “We must be the change we wish to see in the world”? Which of the novel’s characters yearn for change, and which ones achieve it?

11. Why does Greta insist that “Poppy had nothing to do with what Flynn did. She’s not responsible”? Is it possible to separate Flynn’s propensity for depression from her abandonment by her mother? Does Anna find Poppy culpable?

12. What role does the late Hugh play in the way Anna approaches her new life in Maine? How does the memory of him act as a conduit between her and Flynn? What finally allows Anna to let go of Hugh to the extent that she is open to the possibility of romance?

13. Are the adults in the novel too self-absorbed to realistically see how troubled and endangered Flynn is, or are they earnestly trying to allow her the freedom of eccentricity? Why does Anna muse only half-heartedly about Flynn’s possible need for professional help? Is the consequence of Flynn’s action an avoidable tragedy or an instance of fate?

14. During a game of “would you rather” with Flynn, Anna chooses to be a fig tree rather than a whale, stating, “I would always prefer to bear fruit” [p. 139]. How can this conviction be reconciled with her apparent distaste for motherhood? Does this moment mark a turning point for Anna, or is she simply accessing her real feelings on the matter?

15. What is the significance of the birch log fire Anna smells the morning of the tragedy?

16. Jack imagines infection with the AIDS virus as a kind of pregnancy, giving him a sense of being rooted, or caught up in a continuum. He envisions “the lineage of all those he’d ever loved and his lovers’ loved ones, through this virus, a kind of terrible, merciless child who gestated over and over” [p. 40]. What does this odd reflection reveal about Jack? Is he a likeable character despite his patent untrustworthiness? How does Jack’s character evolve over the course of the novel?

17. What does Anna mean to convey when she tells Marvin, “Mourning is easier than worry. Or any of those emotions you feel for the living” [p. 116]? Has she closed herself off to the possibility of love and relationships? Or is she entering another phase of dealing with them?

Renée Manfredi holds a fellowship from The National Endowment for the Arts and was named a regional winner of Granta’s Best American Novelists Under Forty. Her story collection, Where Love Leaves Us, won the Iowa Short Fiction award. Her short stories have appeared in The Mississippi Review, The Iowa Review, The Georgia Review, and the Pushcart Prize anthology and have been featured in NPR’s Selected Shorts series. Above the Thunder is her first novel.

Digging Up the Mountains
Neil Bissoondath

The Honor of a Newsboy (Stories)
Kurt Vonnegut

The Equations of Love
Ethel Wilson

The Song Of The Lark
Willa Cather

The Time of My Life
Rob Spillman

The Lamp at Noon and Other Stories
Sinclair Ross

The Vintage Book of War Fiction

The Imagination of the Heart
Barry Gifford

Not Under Forty
Willa Cather

The Journey Prize Stories 28
Back to Top