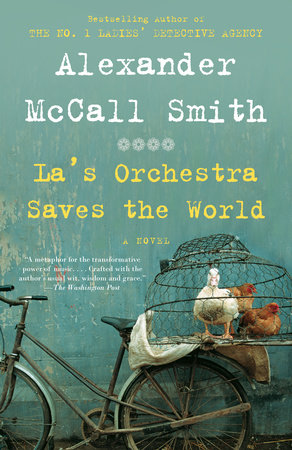 A delightful and moving story set during World War II in England that celebrates the healing powers of friendship and music. It is 1939 and Lavender, “La” to her friends, has left London for the countryside, to avoid the bombs and her shattered marriage. The peace and solitude of the small town are therapeutic, but at times too much so. She organizes an amateur orchestra for diversion and to boost the town’s morale.

With his all-embracing empathy and his gentle sense of humor, Alexander McCall Smith makes of La’s life and love a tale to enjoy and cherish.

1. Who are the two brothers in the beginning of the novel? Why are they visiting La’s former house in Suffolk? And why does Alexander McCall Smith commence the novel with them? Why does he purposely make their background vague?

2. Why does La marry Richard? Are they compatible in any way? How does time and place influence their decision to get married? Do you think they would have gotten married if they were dating in 2009? At one point later in the novel, La says to Mrs. Agg, “People are the products of their time.” What does this mean? Do you agree?

3. In this novel, what are the differences, both obvious and subtle, between life in the city and life in the country in the days before and during World War II? Where would you have preferred to live?

4. Why is Suffolk life so therapeutic for La when she’s single again? Do you think she really likes gardening? How is a wartime garden different from a peacetime garden, according to La?

5. There are many references in the novel to suffering in life and the power of music to heal and to provide hope and joy. What is it about music that gives it these properties—and in this novel, particularly classical music? How is different music good for different things, according to the novel? Do you agree?

6. How is music the antithesis of war?

7. How does La’s orchestra raise morale and provide a diversion and hope to those playing instruments as well as to the townspeople in the audience?

8. What is the importance of Henry Madden in the novel? Why is he so stubborn and bitter? After being blamed by his wife for the death of his son, why does he, in the absence of any proof, accuse Feliks of being a thief?

9. What do you think the author is saying about xenophobia— the suspicion and hatred of foreigners and “others”—especially during wartime? How do you think things have changed from the 1940s to the present?

10. How did the war transform lives in this novel, turning some upside down in a negative way and others in a positive way?

11. Do you think this is an antiwar novel or do you think it says that war is inevitable?

12. Why does La betray Feliks although she acknowledges that she is in love with him? Do you think she was scared of her feelings for him and this exacerbated her suspicions?

13. Why is La also suspicious of Lennie (who is different from most boys his age), and why does she accuse him to the police with no proof? Does the heightened atmosphere of war cause her to not trust anyone?

14. Describe La’s relationship with her Cambridge tutor, Dr. Price. Why is it so fraught with tension? Do you think if La hadn’t married, she would have turned out more like Dr. Price?

15. Why does the author, near the end of the book, suddenly switch from the third person to the first person, so that we suddenly hear the story in La’s voice? How does this affect your reading of the novel?

16. In the book, “people took pleasure where they could find it, and with gratitude.” How are people able to do this, especially when things are in short supply?

17. By the end of the novel, how does music bring love back into La’s life?

Alexander McCall Smith is the author of the best-selling No. 1 Ladies’ Detective Agency series (now an HBO TV series) and the Isabel Dalhousie series, among others. He is professor emeritus of medical law at the University of Edinburgh and has served on many national and international bodies concerned with bioethics. Born in southern Africa, he now lives in Scotland and plays the bassoon in the Really Terrible Orchestra in his spare time.

I Always Loved You

Mrs. Sinclair’s Suitcase
Back to Top