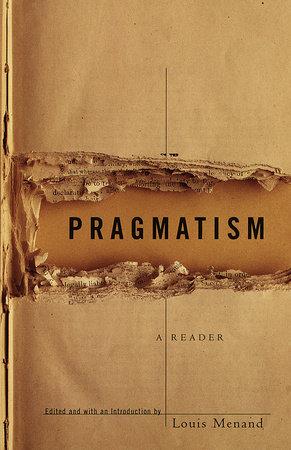 Here are the major texts of American pragmatism, from William James, John Dewey, Oliver Wendell Holmes, and Charles Sanders Peirce to Cornell West, Richard Rorty, Hilary Putnam, Richard Posner, and Richard Poirier, now collected and reprinted unabridged. All are remarkable for the wit and vigor of their prose and the mind-clearing force of their ideas. They reflect the vital role that pragmatism has played in almost every area of American intellectual and cultural life, inspiring judges, educators, politicians, poets, and social prophets. Edited and introduced by Louis Menand, Pragmatism: A Reader is an invaluable resource—and an absorbing read—for everyone who is interested in American culture.

Louis Menand is Professor of English at Harvard. His book The Metaphysical Club (2001) won the Pulitzer Prize in History, the Francis Parkman Prize, and the Heartland Prize for Nonfiction. He is also the author of American Studies (2002) and… More about Louis Menand


An Introduction to Pragmatism

A Note on the Selections


Jane Addams
from "A Function of the Social Settlement" (1899)


George Herbet Mead
"The Mechanism of Social Consciousness" (1912)
"A Contrast of Individualistic and Social Theories of the Self" (ca. 1927)

Richard Rorty
"Philosophy as a Kind of Writing: An Essay on Derrida" (1978-79)
"Postmodernist Bourgeois Liberalism" (1983)


Steven Knapp and Walter Benn Michaels
from "Against Theory" (1982)


Richard J. Bernstein
"Pragmatism, Pluralism, and the Healing of Wounds" (1988)


Cornel West
from "Prophetic Pragmatism," in The American Evasion of Philosophy (1989)


Richard A. Posner
"A Pragmatist Manifesto," in The Problems of Jurisprudence (1990)


Joyce Appleby, Lynn Hunt, and Margaret Jacob from "The Future of History," in Telling the Truth About History (1994)