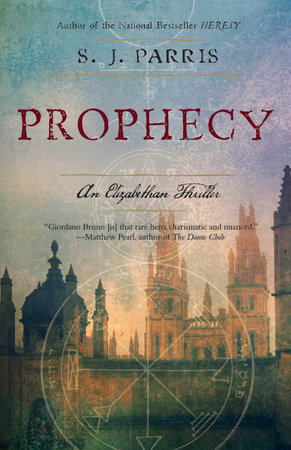 S. J. Parris returns with the next Giordano Bruno mystery, set inside Queen Elizabeth’s palace and steeped in period atmospherics and the strange workings of the occult.

It is the year of the Great Conjunction, the year the powerful planets of Saturn and Jupiter align to herald the end of one age and the dawn of another, and the streets of London are abuzz with predictions of Queen Elizabeth’s death. When one of the queen’s ladies is found dead amidst rumors of black magic, Elizabeth calls upon Giordano Bruno to solve the crimes, along with the help of her personal astrologer, John Dee. But while Dee turns to a mysterious medium claiming knowledge of the murders, Bruno fears that something far more sinister is at work.

1. The theme of the “Great Conjunction”, an astrological phenomenon that heralds the end of the world, is present from the very beginning. How does the idea of Fate and prophecies cast a shadow over the story? Does it influence the way the characters behave and the way they see their own lives? Have we lost the belief in Fate entirely in our own age, or do we still acknowledge it in less obvious ways?

2. Bruno is still very much an outsider in the novel: living in exile, unsure of whom to trust, uncertain of his own future and where he belongs. In what ways does this make him suited for the role of spy and investigator? Did he remind you of any other literary spies or detectives in this respect?

3. From the beginning, Bruno distrusts John Dee’s medium, Ned Kelley, and is skeptical about his claims to speak with spirits. Yet Bruno is also fascinated by magic and the possibility of hidden knowledge. What role does magic play in the novel? Does it seem strange to us now that well-educated men (and women, including the Queen herself) should be interested in both science and magic?

4. The Queen’s maid-of-honor, Abigail Morley, complains to Bruno that young women at court have no control over their own destinies. Did the novel give you a sense of what life was like for women at the time? How do the various female characters in the book embody that?

5. As a spy for Sir Francis Walsingham in the heart of the Catholic conspiracy, Bruno is obliged to betray the confidence of the French ambassador, Castelnau, a man he respects and to whom he owes a degree of loyalty. How far do you think Bruno struggles with his conscience over his relationship with Castelnau? How does he justify this kind of personal betrayal to himself?

6. Marie de Castelnau tempts Bruno to betray his host in a different way—by  having an affair with her. Bruno doubts her sincerity at first—what did you believe were Marie’s motives in trying to seduce Bruno? What did you feel about his response to her?

7. As with Heresy, many of the book’s central characters are real historical figures. Why do you think the author chose to use real characters? Does it affect the way you read the novel to know that some of the events really happened? Would it make you want to read more about the time period or the people involved?

8. Bruno finds himself facing a number of different enemies in the book. How much does he allow prejudice to blind him when it comes to suspecting the killer? Did you suspect who might be behind the murders? Which of Bruno’s enemies might pose an ongoing danger to him?

9. Perhaps the hardest part about imagining the past is putting ourselves into the minds of people for whom religion and politics are inextricably entwined. Did you feel the book brought to life the way people would have felt about their loyalty to their country and their religion? Are there any parallels with our own age?

10. Which of Bruno’s relationships with the other characters in the book was the most vivid for you, and why? What does that relationship reveal to us about Bruno’s own character?


For a complete list of available reading group guides, and to sign up for the Reading Group Center enewsletter, visit www.readinggroupcenter.com

The Devils of Cardona
Matthew Carr

The Inspector of Strange and Unexplained Deaths
Olivier Barde-Cabucon

Dying on the Vine
Aaron Elkins

Silence for the Dead
Simone St. James
Back to Top