While I Was Gone Reader’s Guide 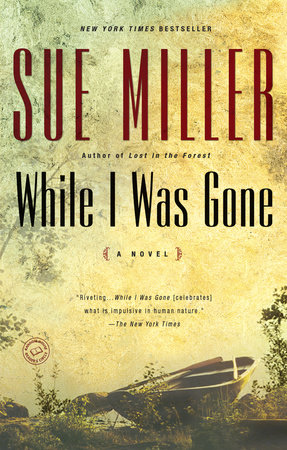 While I Was Gone Reader’s Guide

print
While I Was Gone Reader’s Guide

1.         In the novel’s first scene Jo describes the movement of her boat upon the waters: "In the air above us swallows darted–dark, quick silhouettes–and once a cedar waxwing moved smoothly through them. Layers of life above me. Below, I could hear the lap of the deep water through the wall of the boat." How does this reflect the book’s epigraph? How do this passage, and the epigraph, work together to express the novel’s themes? In what sense are the "trout" in the book’s epigraph, and the "deep water" in this passage, metaphors for a universal experience? What do you think they are meant to represent, and how do they foreshadow the novel’s events?

2.         One of the notions Miller returns to throughout the novel is the fracturing of identity, and the disparity between past and future selves. On page 11 she notes, "The impossibility of accepting new versions of oneself that life kept offering. The impossibility of the old version’s vanishing." What does she mean by this? How does this relate to Jo’s experience in Cambridge? How does it contribute later to her attraction for Eli?

3.         The first lie Jo tells about herself when she moves into the house on Lyman Street is her name–she calls herself Felicia Stead. Is this an important lie? What about the stories Jo makes up about her background? How did you feel about this section of the novel, and about Jo/Felicia during this period? Do you think the liberties she takes with these and other details about her previous life enable her to be more herself–more honest, in a way, because this reinvention of herself is truer to her heart than the life and the identity she fled–or do they engage her in falsehoods and deceptions that undermine the possibility of truth, and of true friendship?

4.         Discuss Jo’s feelings after Daniel’s sermon. She has not seen him since their disagreement the night before; yet as she leaves the church she feels "such a wild reckless joy and excitement that I wanted to yell, to dance under the pelting rain. Daniel! I wanted to shout . . . Daniel, my husband!" What’s changed?

5.         Discuss the sermon itself–in particular, this notion of "memory as a god-given gift." How do themes of memory and forgetfulness reverberate in the novel as a whole? What relationship, if any, does memory have to morality? How and on what levels do you think Jo was moved by Daniel’s sermon? How were you moved by it as a reader?

6.         After Eli’s confession Jo has to make a series of difficult choices. She could have shielded Daniel from the knowledge that she had been prepared to commit adultery, but to do so she would also have had to shield Eli. Should she have turned Eli in to the authorities? Should she have confessed her romantic intentions with Eli to Daniel? What should Jo have done? What do you think the author believes Jo should have done? What would you have done?

7.         After he confesses to the murder, Eli makes the argument that his scientific achievements counterbalance his crime. "I’ve worked the rest of my life to assure that who I am has some meaning, some value beyond this part of my past . . . And I have lived my life that way: making sure every day of its usefulness, of its meaning. I wrecked one life, yes. Dana’s life . . . but I’ve given, I’m giving now, to thousands, to hundreds of thousands, of other lives." Has Eli redeemed himself? How is your response to this shaped by the fact that–financially, in stature, in his notion of his own self-worth, in the pleasure that he derives from it–Eli has benefited from this work? Can a person who has committed a murder ever be redeemed? What do you think the author believes, and why?

8.         Long before Eli’s confession to Jo, Eli and Jo meet for coffee and Jo makes a similar comment about her own guilt about having treated her first husband so poorly, and how her work has helped to ease her conscience: "It made me feel I’d earned my way back to a normal life." Is this legitimate? More legitimate than Eli’s argument? Do you feel that either of them ever really has to face the consequences of their mistakes? Discuss the differences–and the similarities–between the ways in which the two have lived their lives.

9.         After Jo’s description of her second meeting with Daniel, she says, "We were married six weeks later, and I would say we have lived happily, if not ever after, at least enough of the time since. There are always compromises, of course, but they are at the heart of what it means to be married. They are, occasionally, everything." What does she mean by this? What kinds of compromises have she and Daniel made for each other? Discuss this in relation to the end of the novel. Look in particular at the scene where Daniel waits in the shadows for Jo to depart ("He’s seen me in the car, and he’s stopped there, waiting. He doesn’t realize I’ve seen him. He doesn’t want me to see him."), and the scene with Daniel and Jo at the airport ("I made myself register consciously the expression that had passed for a moment over his face as he moved forward to hold me: a sadness, a visible regret.")

10.         When her children were young, Jo used to tell them bedtime stories about a character named Miraculotta. One night Cassie said to Jo, "I know who Miraculotta really is, Mom . . . she’s you." Later, as an angry, disaffected fourteen-year-old, Cass’s awe for her mother has changed to contempt: "You’re so limited," Jo recalls Cass telling her, and in response, Jo thinks, "Well yes, of course I am." What does Jo mean by this? Is she referring to herself specifically, or to all parents? What do you feel about Jo as a mother?

11.         "Deliberately, playfully, I fed fantasies about Eli. I allowed them to become sexual, I gave them specific flesh. I imagined us in sundering, tearing passions in hotel rooms in Boston, in nondescript motels or inns in towns twenty or fifty miles away . . . It was all right to imagine this, I said to myself . . . as long as I understood it wasn’t going to happen." Do fantasies have a morality? Is it all right to imagine, as long as we don’t follow through? Are thoughts, in and of themselves, dangerous? Immoral?

13.         At the end of the novel, several people are confronted by revelations they find shocking about people they thought they knew: Sadie discovers the murder in her mother’s past; Jo discovers that her father had a previous marriage; and Daniel, of course, discovers his wife’s near infidelity. In her letter to Sadie, Jo writes, "Now there’s a different message, I guess, something having to do with our inability to know or guess at the secret depths of another person." Later she makes reference to a similar feeling on Daniel’s part–"the momentary possibility that he didn’t know me at all"–and she recalls her mother’s words after her mother’s confession: "We’re the same, aren’t we? It hasn’t changed us in your eyes to know this." Is it possible to ever really know another person? Should all secrets be told?

14.         Using Jo’s reflections after her mother’s confession ("It seems we need someone to know us as we are–with all we have done–and forgive us . . . ") and, most particularly, her reflections in the novel’s closing pages ("Perhaps it’s best to live with the possibility that around any corner, at any time, may come the person who reminds you of your own capacity to surprise yourself, to put at risk everything that’s dear to you. Who reminds you of the distances we have to bridge to begin to know anything about one another. Who reminds you that what seems to be–even about yourself–may not be. That like him, you need to be forgiven."), discuss the theme of forgiveness in the novel.

Learn More About While I Was Gone
print

When These Mountains Burn

America America
Back to Top