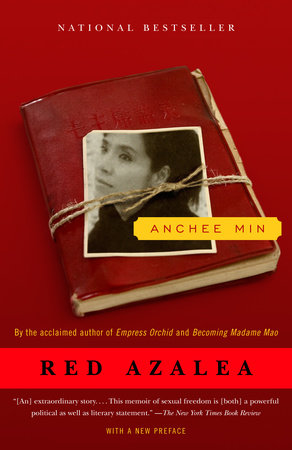 “[An] extraordinary story. . . . This memoir of sexual freedom is [both] a powerful political as well as literary statement.” —The New York Times Book Review

We hope the introduction, discussion questions, suggestions for further reading, and author biography that follow enhance your group’s reading of the evocative and awe-inspiring Red Azalea.

In Red Azalea, Anchee Min remembers with clarity and poignancy growing up during China’s Great Proletarian Cultural Revolution (1966–1976). She experienced abject poverty, brutal physical hardship, first love, and loss, all during this extraordinary and terrifying period of China’s history. Despite her being subject to the exploitation and abuse of the oppressive and evil regime of Mao Tse-tung and his wife, Jiang Ching, Min’s memoir portrays an indomitable mind, body, and spirit that refuse to be crushed.

Min grew up hungry and wearing rags. She declares that she was “an adult since the age of five” [p. 3], and her memoir continues in this same matter-of-fact, yet heartbreaking, vein. She was responsible not only for the care of her three younger siblings but also often for the care of her educated parents who were forced by the Communist Party into grueling manual labor jobs to carry out the goals of the Cultural Revolution. An excellent student, Min gained respect in school for her mastery of Mao’s teachings. She rose to leadership in the Little Red Guards—the youth branch of the Red Guards, who were the Party troops created to implement and enforce the Cultural Revolution. Then Min faced the ultimate test of her loyalty to the Party and to Mao. At twelve years old she was forced, in the name of the Party, to denounce a beloved teacher as a traitor. The Party rewarded Min for her success by forcing her to become a peasant, and at the age of seventeen, Min found herself drafted to a prison-like work farm in the country. Min’s coming-of-age as a bright, strong young woman occurred during these harsh gray years. Intellectually, she lost some of her illusions about, and became more critical of, the Party. Emotionally, she experienced her first love. After three years of hard labor, Min was given a ticket out of the hellish existence she led on the farm when she was “discovered” by Jiang Ching’s scouts from Shanghai and auditioned for the part of Red Azalea in Jiang’s new revolutionary film. Her training as an actress and her liason with Jiang’s disciple gained her the coveted part. However, the death of Mao Tse-tung on the eve before the filming was to change Min’s future resolutely.

2. What are Min’s obligations to her parents and siblings? How are these obligations and expectations affected by the Cultural Revolution?

3. Min writes of her early years in school, “To me, history meant how proletarians won over their reactionaries. Western history was a history of capitalist exploitation” [p. 25]. What are Min and her peers taught to feel about Chairman Mao? How do Min’s parents feel about Mao?

4. Min recalls yelling at her mother: “I said, I don’t want to inherit your life. It is a terrible, terrible and terrible life. I yelled at her. My mother went to take pills. I said, Don’t you see? Can’t you see it’s not working? Your philosophy does not work for me. My mother refused to give up. She said she didn’t believe that evilness should rule. I said, It’s ruling. She said, It’s impossible” [p. 233]. Does this exchange represent a typical intergenerational conflict, or is their conflict unique because of the unusual and strong control the Communist Party and the Cultural Revolution had on their lives? Can Min or her mother exercise any control over their own lives? What choices do they each make about their life vis-à-vis the Party?

5. Why does Min select the story of Big Beard to include in her memoir as a pivotal event from her childhood?

7. How did Lu’s and Yan’s respective upbringings shape their personalities, and, ultimately, their destinies within the Party? How do Yan and Min each relate to Lu?

8. Is there a message in the following poem by Mao that Yan and Min recite while traveling back to the farm?

The wind and the rain sent the spring away
But the snow has brought it back.
There are ice columns a hundred feet long
Hanging dangerously down from cliffs.
There is a little plum flower blooming.
The flower has no intention
To compete with the spring.
She is here only to announce
The coming of the spring.
By the time the flowers bloom
All over the mountains,
She will be hiding among the flowers
And she will smile with great delight. [p. 144]

9. Min writes: “Soviet Wong walked a half step behind Sound of Rain, never overtaking him or lagging behind him one step. They both wore blue Mao jackets with collars buttoned tightly at the neck. They nodded, Sound of Rain first, then Soviet Wong, at the workers who passed by. They paid the workers full-scale smiles. The smile made me nervous, although it was the most admired smile in the country. It was the smile that Mao had been promoting with the slogan: ‘One must treat his comrades with the warmth of spring.’ Lu at Red Fire Farm was an expert at that type of smile” [pp 163]. What does this smile represent to Min, and why does it make her nervous?

11. Despite her realization that she was working for little reward, Min took pride in the bridge she helped to build at the farm [p. 120]. Does this personal pride conflict with the message preached by the Party and Mao during the Cultural Revolution? Does her pride symbolize Min’s unique strength of character, or is it also a universally human character trait?

14. Min said the following in an interview: “My life as a woman is tied to hers [i.e., Madam Mao’s]. I am a product of her brainwashing. Ironically, because of the sad things in her life, she took opera as a fantasy, a hideout. She put everything she could not achieve in life in the opera. And for ten years she forbids the nation to watch anything else but her operas. Six of her eight operas portray very powerful women. It’s almost ridiculous. They have no private lives and no relationships. They basically are leaders, but they are being pushed back. And they are all worshipping Mao. Then there comes a crisis, and the woman always says, with the music and the orchestra playing, ‘I am thinking of Chairman Mao.’ And then, boom! She has an idea and the problem’s solved. For my formative years, from eight to eighteen, this was my mindset” [Powells.com interview, June 14th, 2000].

As a girl, why is Min attracted to the operas of Jiang Ching? [See pp. 15–6] At what point does her attraction to the operas become more objective and critical? How does her opinion of the operas, as she explains it to the Supervisor [pp. 237–8], differ from her childhood opinion? Does Min agree with the Supervisor’s view of Jiang’s operas? [See pp. 238, and p. 301] Can the reader perceive in Min a woman who was influenced by these operas, as Min describes them in the quotation above?

16. In a memoir, the author can select whatever he or she wants to tell about her or his own history. What does Min seem to have omitted from her history, and what effect do these omissions have on the reader? Is there anything the reader might want to know in order to better understand Min?

17. Is it accurate to describe Min’s tone throughout her memoir as conveying emotion without being emotional? How does she achieve this? Does Min allow the reader to feel sorry for her?

20. How might a Chinese reader perceive Red Azalea differently than an American reader?

Born in Shanghai in 1957, Anchee Min came to America in 1984 with the help of Actress Joan Chen. While attending English as a Second Language classes, she worked as a waitress, a house cleaner, an assistant on construction sites, a fabric painter, a messenger, and a model. In 1990 she received a Masters of Fine Arts Degree from the Art Institute of Chicago. Min wrote Red Azalea in her new language, English, over an eight-year period. Red Azalea was named a New York Times Notable Book in 1994 and became an international bestseller the following year.

Tears of the Desert
Damien Lewis and Halima Bashir

A Backpack, a Bear, and Eight Crates of Vodka
Lev Golinkin

The Back Channel
William J. Burns

In an Instant
Bob Woodruff and Lee Woodruff
Back to Top