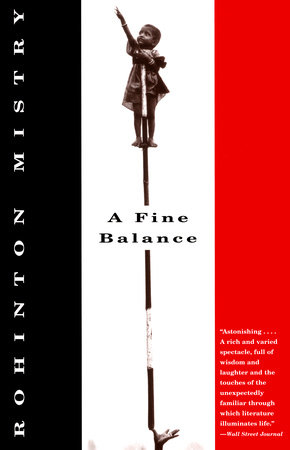 The questions, discussion topics, and suggested reading list that follow are intended to enhance your group’s experience of reading Rohinton Mistry’s A Fine Balance. We hope they will provide many interesting angles from which to approach this sweeping and magnificent novel by one of the most powerful of contemporary writers.

The time is 1975; the place is India, in an unnamed city by the sea. The corrupt and brutal government has just declared a State of Emergency, and the country is on the edge of chaos. In these precarious circumstances, four characters form an unlikely alliance: two tailors, uncle and nephew, who have come to the city in flight from the cruel caste violence in their native village; a middle-aged widow desperately trying to preserve her fragile independence; and a young student from the northern mountains, bewildered by the end of his idyllic childhood and his parents’ slow collapse. Through the dramatic and often shocking turns their lives take, we get an intimate view not only of their world but of India itself, in all its extraordinary variety. Rohinton Mistry creates unforgettable characters and vast social panoramas on the scale of Dickens and Victor Hugo, and he shares, as well, their remarkable generosity of spirit.

1. Why has Mistry chosen not to name the Prime Minister or the City by the Sea, when they are easily recognizable? Does recognition of these elements make any difference in your attitude toward the story?

2. Is Nusswan presented entirely as a villain, or does he have redeeming features? What are his real feelings toward Dina?

3. How does Dina’s position within her family reflect the position of women in her culture and social class? Is the status of Om’s sisters the same as Dina’s, or different? What sorts of comparisons can you make between the roles and functions of women in India (as represented in this novel) and in America?

4. Post-Independence India has seen much religious and ethnic violence: for instance, the mutual slaughter of Hindus and Muslims after Partition (1947), during which Ishvar and Narayan saved Ashraf and his family, and the hunting down and killing of Sikhs after the Prime Minister’s murder, witnessed by Maneck. How does the behavior of the characters in the novel, ordinary Hindus, Parsis, and Muslims, contrast with the hatred that inspired these terrible acts? How much of this hatred seems to be fomented by political leaders? Dukhi observes bitterly "that at least his Muslim friend treated him better than his Hindu brothers" [p. 115]. What does this say about ethnic and religious loyalties, as opposed to personal ones?

5. After Rustom’s death, Dina’s primary goal is self-reliance. But as the novel progresses and she makes new friends, she begins to change her ideas. "We’ll see how independent you are when the goondas come back and break your head open," Dina says to Maneck [p. 433]. Does she find in the end that real self-reliance is possible, or even desirable? Does she change her definition of self-reliance?

7. Why does Avinash’s chess set become so important to Maneck, who comes to see chess as the game of life? "The rules should always allow someone to win," says Om, while Maneck replies, "Sometimes, no one wins" [p. 410]. How do the events of the novel resemble the various moves and positions in chess?

8. Dina distances herself from the political ferment of the period: "Government problemsÑgames played by people in power," she tells Ishvar. "It doesn’t affect ordinary people like us" [p. 75]. But in the end it does affect all of them, drastically. Why do some, like Dina and Maneck, refuse to involve themselves in politics while others, like Narayan and Avinash, eagerly do so? Which position is the better or wiser one?

9. When Ishvar and Om are incarcerated in the labor camp, Ishvar asks what crime they have committed. "It’s not a question of crime and punishment–it’s problem and solution," says the foreman [p. 338]. If it is true that there is a problem–the vast number of homeless people and beggars on city streetsÑwhat would a proper and humane solution be?

10. People at the bottom of the economic heap frequently blame so-called middlemen: people like Dina, who makes her living through other people’s labor, or like Ibrahim the rent collector. Do such middlemen strike you as making money immorally? Who are the real villains?

11. How would you sum up Beggarmaster: Is he ruthless, kind, or a bit of both? Does he redeem himself by his thoughtful acts, the seriousness with which he takes his responsibilities toward his dependents? In a world this cruel, are such simple categories as "good" and "bad" even applicable?

12. When Beggarmaster draws Shankar, Shankar’s mother, and himself, he represents himself as a freak just like the other two. What does this vision he has of himself tell us about him?

13. The government’s birth control program is enforced with violence and cruelty, with sterilization quotas and forced vasectomies. But is birth control policy in itself a bad thing? Dina tells Om, for example, "Two children only. At the most, three. Haven’t you been listening to the family planning people?" [p. 466]. How might family planning be implemented in a humane fashion?

14. After Dina’s father dies, her family life is blighted until she marries Rustom. In later years, she chooses to withdraw from her natural family; it is not until her year with the tailors and Maneck that she again comes to know what a family might be. What constitutes a family? What other examples of unconventional "families" do you find in the novel?

15. Why do Ishvar, Om, and Dina survive, in their diminished ways, while Maneck finally gives up? Is it due to something in their pasts, their childhoods, their families, their characters?

16. "People forget how vulnerable they are despite their shirts and shoes and briefcases," says Beggarmaster, "how this hungry and cruel world could strip them, put them in the same position as my beggars" [p. 493]. Does A Fine Balance show people’s vulnerability, or their fortitude?

17. What effect is achieved by the novel’s mildly comic ending, with Om and Ishvar clowning around at Dina’s door? Is the ending appropriate, or off-balance?

18. The novel gives us a vivid picture of life for members of the untouchable caste in remote villages. Why might such an apparently anachronistic system have survived into the late twentieth century? Does it resemble any other social systems with which you are acquainted? Why do so few of its victims fight the system, as Narayan does? Why do so few leave the village: is it from necessity, social conservatism, respect for tradition?

Rohinton Mistry was born in Bombay and now lives near Toronto. His first novel, Such a Long Journey, was shortlisted for the Booker Prize and received, among other awards, the Governor General’s Award and the Commonwealth Writers Prize for Best Book of the Year. A Fine Balance is his second novel, winner of the Los Angeles Times Book Prize in Fiction, the Giller Prize, and the Commonwealth Writers Prize as well as a Booker Prize finalist. Mistry is also the author of Swimming Lessons, a collection of short stories.
Learn More About A Fine Balance
print

Claire of the Sea Light