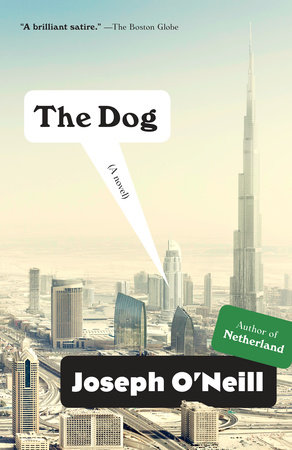 The questions, discussion topics, and reading list that follow are intended to enhance your reading group’s discussion of The Dog¸ bestselling author Joseph O’Neill’s darkly comic novel about a man who takes a job in the spectacularly futuristic yet oddly disconnected city of Dubai in an attempt to outrun his sorrow.

From the acclaimed author of Netherland comes his eagerly anticipated, terrifically inventive new novel: a story of isolation and self-examination set in modern-day Dubai. With keen insight into the motivations and desires that drive behavior, The Dog is a droll analysis of this era of modernization and globalization, and the innately human inadequacies that linger in spite of our progress.

After a painful split from his longtime girlfriend, the hero of The Dog is in a rut. Eager to escape the memories of his relationship—and the office environment where he and his girlfriend met—he decides to leave New York for a job offered to him by a former classmate. The narrator finds himself in the ambiguously defined role of Family Officer to an erratic and extremely wealthy family in Dubai, wherein he struggles to understand the parameters of his job and, to a greater extent, his purpose in life. His solitude is amplified by his surroundings, and a crushing feeling of culpability pervades him: he cannot shake the feeling that he is in “the doghouse,” a condition wherein guilt follows his every decision. As he finds himself increasingly immersed in the Batros family politics, the protagonist slides further into his own self-examination. With a singular perceptiveness of the sometimes idiosyncratic and other times predictable behavior of humankind, Joseph O’Neill’s The Dog is a masterful look at morality in these modern times.

1. The protagonist of The Dog describes Dubai as a city of contradictions: hypermodern in some respects, but antiquated in others. How does this tension between modernity and tradition manifest throughout the novel? In what situations is the city’s dual nature most apparent? Most troubling?

4. The concept of nationality is discussed throughout The Dog, revealing social and political inequities in Dubai. Discuss the label “bidoon.” How does this concept of “statelessness” render bidoons inferior in Dubai society? How did you interpret the protagonist’s reluctance to ask Ali about his status?

5. Class divisions are readily apparent throughout The Dog, and often generate moral conflict. Discuss the protagonist’s guilt in regards to his esteemed position in society. What interactions cause him the most anguish? How does this relate to his feeling of being in “the doghouse”? In what ways is his privilege more pronounced in Dubai than it was in the United States?

6. Names bear an important symbolic weight throughout The Dog. How did you interpret the protagonist’s hesitation to reveal his name? Jenn’s aversion to her own? What connections can be made between names and power?

7. The Dog is a novel that explores the thin line between morality and immorality. How does the protagonist define morality? Would you consider him to be a moral person? In what areas of life is his moral compass most greatly challenged?

8. Discuss the scene that starts on page 162, wherein the protagonist reveals how he and Jenn ended their relationship. How does referring to her as “un-Jenn” during this scene help you to understand her character? Based on earlier descriptions of Jenn, were you surprised by her actions? Did you have any sympathy for her? For the protagonist?

9. The protagonist was a New York attorney. How does legalistic thinking and interpretation of events come into play throughout The Dog? How does he use logic to process business and personal affairs? Discuss the instances in which he breaks down social situations and interprets them within the scope of legality.

10. The reader is led to believe that the protagonist’s hesitation to commit to Jenn is based on his indifference toward having children, but in his fantasy about running off with the stranger in Union Square, he mentions that he “always wanted daughters.” (page 159) Do you think this is a genuine statement, or is it borne out of his fantasy?

11. On page 197, the protagonist asserts that he is “fully aware that country branding is as old as Genesis.” How do you interpret that statement? Why is branding so crucial to Dubai? Do the protagonist’s observations about life in the city give credence to the branding put forth by the country? In what ways are these ads misleading?

12. The protagonist’s sexual fantasies are laid out plainly throughout the novel. Why do you think he chose to use a pseudonym while patronizing prostitutes? How did these liaisons help to shape your understanding of him? His guilt?

13. The protagonist specifically states that Ollie is one of his only friends in Dubai. What makes their friendship unique? What does the protagonist value most in his friendships?

15. The protagonist identifies himself as both half Swiss and an American. How does his status as an ex-pat align him more closely with the latter? Does he express a greater allegiance to either nationality—and if so, why?

16. How has the modern world challenged our understanding of nationality? How is it possible to do good when we are aware of the plight of everyone everywhere? Is Dubai really any different from the United States?

17. The Ted Wilson plotline carries throughout The Dog, revealing information about the protagonist and the social environment of Dubai as it unfolds. Given that we never meet Ted, why is he important to the plot? How does his absence open up opportunities for the protagonist to explore himself and his own feelings toward marriage, relationships, and identity?

18. Throughout the novel, the protagonist’s internal monologues reveal his inclination toward self-debasement. Did you think his actions justify his self-image? Did you consider him a likable character? A sympathetic one? Did your feelings toward him shift or change throughout your reading experience?

Joseph O’Neill is the author of the novels Netherland (which won the PEN/Faulkner Award for Fiction and the Kerry Group Irish Fiction Award), This Is the Life, and The Breezes, and of a family history, Blood-Dark Track. He lives in New York and teaches at Bard College.
Learn More About The Dog
print

Stories in an Almost Classical Mode

The Anatomy Lesson
Back to Top