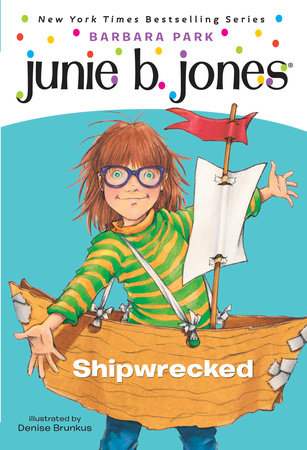 The lovable, mischievous Junie B. of Barbara Park’s humorous series is growing up! She has graduated from kindergarten and moved up to the first grade. Follow Junie B. as she continues to get into one scrape after another. While laughing along with Junie and her friends, your students will expand their word recognition, develop a sense of story, and begin to read these early chapter books on their own.

In this guide for Junie B., First Grader: Shipwrecked, Junie B. fans learn the importance of teamwork in accomplishing a common goal. A dramatic play in which students tell the story of Columbus landing in the New World from the point of view of the Tainos requires students to work together from fact-finding to curtain fall. A hands-on experiment about the multitalented nose shows how our sense of smell serves us in more ways than one. And an activity in which students write letters and draw pictures to say “welcome” reveals that Parents’ Night is more than an opportunity for parents to “spy” on their kids. Finally, a companion printout, telling the story of Columbus’s voyage in rhyme, taps the poet in Junie B. fans everywhere

The kids in Junie B.’s Room One are being plagued by a contagious stomach virus. Using a show of hands, ask students how many of them have ever had a stomach virus? What were their symptoms? How long did the virus last? What medicines or remedies did they use to treat it? How are viruses passed from one person to another? What steps can we take to protect ourselves from particular viruses? Can we develop “immunities” or natural defenses against certain viruses?


Welcome, Parents! (Language Arts, Art)
While some of Junie B.’s classmates feel Parents’ Night is an opportunity for parents to poke their noses in their children’s business, it really is an opportunity for parents to learn more about what their children are doing in school. Have your students welcome their parents to their classrooms with a letter explaining what they will find in their desks and sharing what they are working on. They may introduce parents to particular classmates and tell them about other places in their school (cafeteria, gym, library). Letters may be supplemented with a drawing showing each child engaged in his favorite school activity.


The Nose Knows (Science, Math)
Junie B. and her classmates discover that noses play a major role in our everyday lives, even if holding them doesn’t prevent the spread of germs. Ask students to list smells that they love and smells that they hate. How can smells help to signal danger (smoke from fire, rotten food, gas leaks)? How can smells communicate the pleasures of our world (a rose garden, salt air, fresh baked apple pie)? Can smells help us identify our locations even if we can’t see where we are (school cafeteria, gymnasium, home)? What happens to our ability to taste when we have stuffed up noses from a cold or virus? Working in pairs, conduct an experiment in which students take turns being blindfolded and are asked to identify samples of different foods (apple, potato chip, orange, chocolate, pickle, mint candy) while holding their noses. Then, repeat the experiment without holding noses. Create bar graphs to chart the difference in taste success.


The Voyage of Christopher Columbus . . . Part II (Drama, Social Studies, Art)
Room One’s Voyage of Columbus play ends when Columbus “discovers” land. Cast your students in a sequel play that shows the experience of this encounter from the point of view of the Tainos, the first people to greet Columbus. Using library and Internet resources, have students gather facts about this tall, handsome, clean-shaven people with olive-tan skin who often wore face and body paint. How did the Tainos live? What roles did men, women, and children play in this culture? What were their religious beliefs? What were the Tainos’ first perceptions of the large wooden boats and strangely dressed men who came to their shores? Did they welcome Columbus and his men? How did Columbus respond to these natives? How did this first encounter with Columbus and the European world change the Tainos’ lives? A backdrop mural depicting the grassy plains and lowland rainforest home of the Tainos may set the perfect stage for your production.

PRINTOUT
A POEM FOR COLUMBUS
Directions: Hey, you guys! Remember that really neato poem that Jose shared with Room One about Christopher Columbus? Well, that was just the beginning! See if you can fill in the blanks in the rest of the poem with rhyming words to tell the whole story!

He had three ships and left from Spain;
He sailed through sunshine, wind, and _______.(rain)

Ninety sailors were on board;
Some men worked while others ______.(snored)

Then the workers went to sleep;
And others watched the ocean ______.(deep)

Day after day they looked for land;
They dreamed of trees and rocks and ______.(sand)

“Indians, Indians!” Columbus cried;
His heart was filled with joy and ______.(pride)

The Arakawa natives were very nice;
They gave the sailors food and ______.(spice)

Note: Poem is from www.teachingheart.net/columbus.htm

Prepared by Rosemary B. Stimola, Ph.D. She is a teacher of Children’s Literature at Hostos Community College/City University of New York and serves as educational and editorial consultant to publishers of children’s books.

Scaredy Squirrel in a Nutshell

Pizza and Taco: Too Cool for School

These Are My Pets

The Berenstain Bears and the Spooky Old Tree
Back to Top