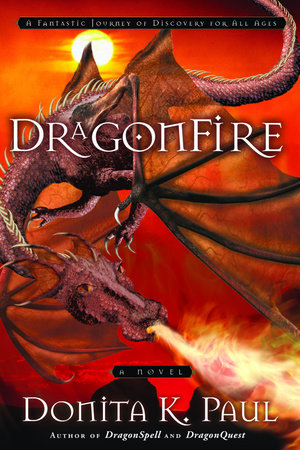 1. As a married couple, Bardon and Kale must learn to rely on each other. Describe each of their personalities and how they complement each other. What are your strengths and weaknesses? In what way does Kale struggle when she must work together with her father? How does “iron sharpen iron” when God places people that are so different from us in our lives?

2. When Kale is separated from her husband by being sent on a different quest, she is quite upset. Can you think of a time the Lord asked you to put aside your personal preferences in order to achieve a greater good? How do you know which road God is guiding you toward?

3. Due to Gilda’s allegiance to Risto, she was reduced to life in a mist form. When she chose to follow Wulder, she was not healed instantly. Although we are a new creation, when we come to Christ, we are not always healed. Why is this? How can the consequences of a sinful lifestyle or the fallen state of man hinder us?

4. Kale has been given more talent and power than most people in Amara, but she is rebuked by Granny Noon for speaking falsely. Granny warns that Kale’s talents are eroded by deception. How do those whom God has exalted to a higher position need to be more careful regarding their talent? In Wulder’s Tomes, there is a principle about the inward enemy defeating the soul with a surprise attack, “Don’t let your own desires cause your fall into disgrace.” What Scripture does this bring to mind?

5. What is Paladin symbolic of and how is his health reflected by the attitude of his people? How does the indifference to evil weaken him? Just as the people in Black Jetty desired to live a comfortable life without complications, how is the church of Christ guilty of this same complacency? Although invisible, there is a spiritual battle being waged all around us. Does this evil go away if we pretend it doesn’t exist? What does Scripture tell us to do? Just as Pretender did not have the authority to kill Paladin, so Satan can’t destroy the church. However, he can wound and humiliate it. What examples do you see of this today?

6. Fenworth warned Kale previously about even dabbling in black magic because she could be lured in by the fringe elements. Do Christians need to have the same concern? What is the difference between a magic show consisting of card tricks and “black magic”? What does Scripture have to say about this subject?

7. Among the seven low races, some seem to show themselves intelligent but choosing evil, while others like the ropma appear to be non-rational, with no sense of right and wrong. As they have not been made directly by Wulder, most people have told the ropma that they are bad, and Wulder hates them. Does God love all people? Even those who choose evil or those who do not appear to know right from wrong? What about those who follow other religions? Who does He desire to be saved?

8. Although Kale has been reunited with her father, she has missed her childhood years with him. Her father expresses how sorry he is that he was not there for her. Have you ever felt abandoned by a parent or a friend? Look up Scriptures that are an encouragement that the Lord will never leave us.

9. Kale finds that her father has a very different set of ethics when it comes to mindspeaking. She has been taught that it is unscrupulous to listen to other’s private thoughts even to gather information. He tells her that it is the motive of the heart that matters most to Wulder. Is it ever right to do what is wrong with the right motivation? Can you think of examples from Scripture of people that have done what is wrong, but for a good reason? What was the result?

10. Gilda still has areas to grow in, resulting from her time with Risto. Her pride of the meech and looking down on any other race comes through in her attitude and words. Why is it easier for Regidor to see Gilda’s prejudism than it is for her to see it in herself? How does the Lord reveal issues like this in our lives?

11. Describe how Latho the bisonbeck choosing to follow Wulder is similar to Saul becoming Paul. As Latho was not trusted even after he decided to do what is right, how often do we judge others based on who we think they are? Some who come to Christ have radical conversions that speak volumes of God’s miraculous work in their lives. How is God able to use this kind of person specifically to reach others for Christ?

12. Latho describes the place called the “End of the Day” as a place where those who die in anger will be devoured. They leave this existence and enter the night. How is this similar to the world’s view on life after death? Why is it so difficult to share the good news of Jesus Christ with them?

13. Kale is tempted by Pretender with all the things that she wants the most: her talent, her friends, her father’s life, and her beauty back. What does Satan tempt you with? After she gave in to temptation once, how is she left feeling? When you have those emotions, what brings you relief?

Dragons of the Valley

Dragons of the Watch

Bittersweet
Back to Top