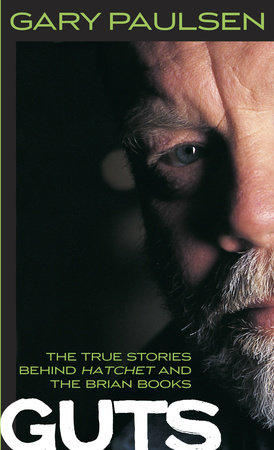 “So much of what I did as a boy came to be part of Brian–all of it, in some ways. I hope that Guts satisfies those readers who want to know more about Brian and my life.”–Gary Paulsen

Young readers from around the world who have written letters to Gary Paulsen asking specific questions about Brian Robeson will welcome this book about Gary Paulsen himself. Like the Brian books, Guts is filled with adventure and lessons learned about surviving in the wilderness.

This teachers guide includes a number of discussion questions and activities that help young readers understand the connection between fact and fiction. We hope you will find this guide useful in introducing young readers to the idea of preserving their own real-life experiences.

This gritty account of the real-life adventures that led Gary Paulsen to create Brian Robeson, the 13-year-old main character of Hatchet and three other novels, answers many of the thousands of letters that Paulsen receives each year.

Gary Paulsen has encountered many hair-raising and near-death experiences in his life, which makes him a first-rate survivor. He has witnessed a plane crash, volunteered on emergency missions, and run the challenging and dangerous Iditarod race in Alaska. He has made his home in the wilderness, on a sailboat, in a car, and on the streets. He knows firsthand what it takes to endure loneliness and fear. And Paulsen takes all of these experiences and hands them to Brian Robeson, his 13-year-old protagonist left to survive in the Canadian wilderness after the pilot of the small plane he is in dies of a heart attack.

Three-time Newbery Honor winner Gary Paulsen developed a passion for reading at an early age. Running away from home at the age of 14 and traveling with a carnival, Paulsen acquired a taste for adventure. His realization that he would become a writer came suddenly while he was working as a satellite technician for an aerospace firm in California. One night he walked off the job and spent the next year in Hollywood as a magazine proofreader, working on his own writing every night. He completed his first novel late that year.

SURVIVAL–Gary Paulsen has written about survival in many of his novels. What qualities are necessary to be a survivor? Discuss the ways in which Gary Paulsen is a survivor. How do you think he developed his survival instincts? Most people would like to feel that they could survive if they were in a catastrophic situation. Ask each student to make a list of the skills they possess that would help them survive in nature for a week. Encourage them to share their lists with the class.

SELF-DISCOVERY–In the Brian books, Brian Robeson feels that he has changed as a result of his 54 days in the wilderness. Discuss how Paulsen’s personal experiences with nature changed him as a man. How do you know that nature will continue to be a part of Paulsen’s life?

COURAGE–Based on the events that he writes about in Guts, Paulsen might be considered a man of courage. Discuss whether Paulsen’s boyhood taught him courage. Ask the class to consider whether it was courage or stupidity that got him into situations such as the moose attacks. Why is Guts an appropriate title for this book? Think about Brian Robeson. How does his ignorance sometimes contribute to his courage in battling nature?

HOPE–In the first chapter of Guts, Paulsen writes about his efforts as a volunteer to answer emergency ambulance calls. He says that he never wanted to give up on a victim because he felt that there was always hope. How does Paulsen’s life reflect hope? How does it take hope to be a survivor? Discuss whether Brian Robeson ever felt that his destiny was hopeless. How does he maintain hope?


Connecting to the Curriculum

LANGUAGE ARTS–When Paulsen went to Alaska to prepare for his first Iditarod, he says that he “had dreams that could have been written by Jack London.” (p. 42) Have students use materials in the library or on the Internet to get information about Jack London. Then write Paulsen’s experiences in “Moose Attacks” as a short story in the style of Jack London.

SCIENCE–Paulsen says, “Of all the creatures on earth the mosquito is far and away the most deadly to man.” (p. 57) One of the diseases transmitted by the mosquito is malaria. Have students research the symptoms and treatment of this disease. How is the disease prevented? Using figures from an almanac, construct a graph that compares the deaths throughout the world due to malaria in the 20th century.

Like Brian Robeson, Paulsen has encountered many animals in the woods where he fished and hunted. Paulsen says, “There are many different aspects of sound in the woods. . . . But all the sounds have reason to them.” (p. 101) Ask students to pick one animal that Gary Paulsen encounters and find out the meaning of its various sounds. For example: How does the animal communicate danger? Paulsen meets a man whose leg had been bitten off in a shark attack. What does the man mean when he says, “I should have listened to the silence.” (p. 102)

MUSIC–A ballad is a narrative composition in verse that is often put to music. Play recordings or read some famous ballads. Divide the class into small groups and have them write a ballad about Gary Paulsen’s life. Ask them to write their ballad to a familiar tune. Give the song an appropriate title.

ART–Brian Robeson uses charcoal to draw on his shelter wall to preserve his memories. Ask students to make a series of note cards that Brian might paint when he gets home. Label each note card with an appropriate caption.

CAREER EXPLORATION–Paulsen has chosen writing as his career, but based on his experiences there are a number of other careers he could have explored. Taking information from Guts, make a list of other possible career options for Paulsen. Then find out the required training and salary for the various professions. Write an advertisement for the classified section of the newspaper calling for candidates in one of these professions.

Hatchet
Thirteen-year-old Brian Robeson learned to survive alone in the Canadian wilderness, armed only with his hatchet and resourcefulness.
Audio: 0-553-47087-6

A Day No Pigs Would Die
Robert Newton Peck

Under the Blood-Red Sun
Graham Salisbury

Before We Were Free
Julia Alvarez

Turning 15 on the Road to Freedom
Lynda Blackmon Lowery

That Was Then, This Is Now
S. E. Hinton

This Is My America
Kim Johnson

Someday We Will Fly
Rachel DeWoskin

Darius the Great Is Not Okay
Adib Khorram

If You Come Softly
Jacqueline Woodson

The Desolations of Devil’s Acre
Ransom Riggs
Back to Top