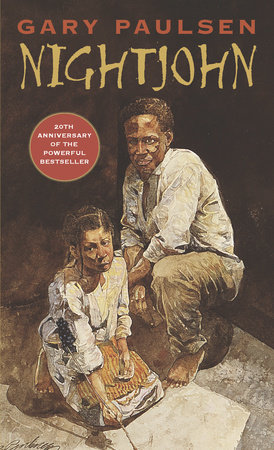 Thematic Connections
Prejudice
Getting Along with Others
Freedom
Leadership

A riveting story of the power of literacy against the inhumanity of the slave system in the pre-Civil War South.

Travel to the Waller plantation and meet 12-year-old Sarny, a slave whose mother was sold away when she was four. Sarny first sees Nightjohn when he is brought to the plantation with a rope around his neck, his body covered with scars from many beatings. Sarny is drawn to Nightjohn when she learns that he had escaped North to freedom, only to voluntarily return to the South.

Nightjohn has a self-imposed mission—to teach slaves how to read and write. He believes knowledge is the key to helping slaves break out of bondage. Sarny is willing to take the risk, even knowing that the penalty for reading is dismemberment.

A word from Gary Paulsen..
I came into writing Nightjohn through the back door. I worked for several years on research on a book on Sally Hemings, who was a slave girl owned by Thomas Jefferson. While I was doing the research, I ran into many other stories, the slave chronicles and its interviews of ex-slaves in the ’20s and ’30s in America.
I sat in my basement reading these things crying every night. And one of the things I ran into several times was the slaves’ attempt to learn to read. For the slaves it was a capital offense to learn to read and they could be killed. They usually didn’t get killed right away because they were too valuable to the slave owner. So the owners would cut a thumb off, or sometimes a toe. They tried to teach each other to read and were successful in many places. Most of the owners were terrified of the slaves learning to read, because they knew they would want to be free.

Three-time Newbery Honor winner Gary Paulsen developed a passion for reading at an early age. Running away from home at the age of 14 and traveling with a carnival, Paulsen acquired a taste for adventure. His realization that he would become a writer came when he was working as a technician for an aerospace firm in California. One night he walked off the job, and spent the next year in Hollywood as a proofreader, working on his own writing every night. He completed his first novel later that year.
Born-May 17 in Minneapolis, Minnesota
Currently lives-Southern New Mexico and the Pacific
Previous jobs- Farm hand, ranch hand, truck driver, sailor, dogsled racer, teacher, field engineer, editor, soldier, actor, director, trapper, professional archer, migrant farm worker, singer
Hobbies-Sailing; collecting and riding Harley Davidsons; twice ran the Iditarod, the challenging 1,000 mile dogsled race across Alaska
Inspiration for writing- After a librarian gave him a book to read—along with his own library card—Gary was hooked. He began spending hours alone in the basement of his apartment building, reading one book after another.

History/Civil Rights-Have students check reference books for historical details of life in the antebellum South and information about Sally Hemings, to whom Nightjohn is dedicated. Students can trace the rights of African-Americans as those rights evolved from the American Revolution to the 1850s and the following periods: Reconstruction, 1896 (Plessy vs. Ferguson) to the 1920s (Jim Crow laws), and the civil rights movement of the 1960s.

Language Arts-Paulsen uses many images that portray the slaves as being treated like animals. Have students make a list of these images. Students can write a “people analogy”—a description of a person that uses the characteristics of a particular animal. For example, Bill is a wily opponent who tricks his football pursuers by retracing his steps. Other students can guess the animal employed (fox).

Music-Encourage students to think about Sarny’s life beyond what Paulsen describes in the book. Because slaves were forbidden to read and write, they had to communicate their feelings in other ways—ways that would not be obvious to their masters. One way they did so was through song. Listen to recordings of songs such as “Follow the Drinking Gourd” and “Steal Away.” Have students create lyrics for a song that relates how Sarny feels about her life on the Waller plantation.

Science-Sarny chews tobacco leaves and spits the juice on the roses to control the “little green bugs.” Tobacco is used as a natural insecticide. Students can explore other methods of natural insect control (e.g., companion plants like basil and tomatoes; predator insects like ladybugs). If possible, students might visit a farm that produces natural fruits and vegetables.

Geography-Nightjohn may have gone North via the Underground Railroad. Have students explore the escape routes that were used by slaves and plot them on a map. Students could label the free states, the slave states, and the locations of some of the stations. They might read stories about Harriet Tubman, another escaped slave who went North and returned to the South via the Underground Railroad.

Prejudice-Is it ever right for one individual to own another, or for one group of people to be denied equal rights because they are different in some way? This would make a good debate topic for students.

Getting Along with Others-Slave owners such as Clel Waller used fear and intimidation to control their workers. Assign students to small groups and give them a task that needs cooperation to finish. Have students rate themselves on their work habits and project how they could do better in the future.

Freedom-Nightjohn had gone North and was free, but returned to the South to help others gain freedom, by teaching them how to read and write. Have students discuss the value of literacy and how it creates freedom. Students can brainstorm how they would perform a familiar routine (eating in a restaurant, going to a different part of town) if they couldn’t read or write.

Leadership-Nightjohn is viewed as a leader among the slaves. What does it take to be an effective leader? Students can select some local or national leaders and decide why they believe these people have been successful in getting support from the voters.

Have students experience inequality through a simulation activity in which students who possess a certain physical feature (e.g. green eyes, brown shoes with laces) receive special privileges. Discuss student reactions and ask them why they think slavery was an integral part of this era.

Because of the historical setting, words and expressions that Paulsen uses in Nightjohn may not be familiar to students. Students might use the context of the story, or they can consult a dictionary to determine the meaning of some terms, such as “pallet,” “breeder,” and “crackers.” Some students may be sensitive to the graphic descriptions of slave life. Discuss how the words made them feel and why they think Paulsen chose to use these words in this book.

In the Classroom
Nightjohn explores slavery and deals with issues of freedom and survival, but in a different way than other Paulsen titles. Have students read some of these to see how he presents these concepts.

Students can watch the Disney Channel Premiere Film based on the book and compare the movie to the novel. (The film, starring Carl Lumbly and Beau Bridges and introducing Allison Jones, was filmed on location in South Carolina under the direction of award-winning filmmaker Charles Burnett.) The dialogue in Nightjohn could easily be used as a Reader’s Theater presentation.

Nightjohn presents a powerful story. Enjoy sharing its historical roots and modern applications with your students!


Learn More About Nightjohn
print
Back to Top