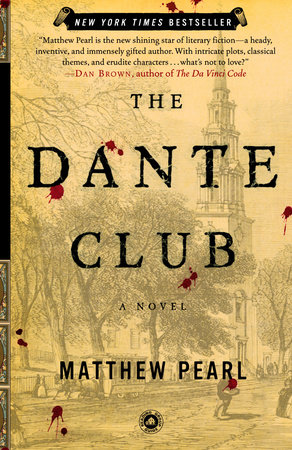 These questions, discussion topics and author biography are intended to enhance your group’s reading of The Dante Club, a historical thriller that can be seen as the story of one of America’s first and most courageous book clubs. We hope this guide will add to your enjoyment of this suspenseful and unique novel about the power of literature.

1. Discuss how the various characters benefit intellectually and professionally from their association with the “Dante Club” reading and translation group. How is the group similar to book clubs now popular throughout the United States? How does it differ?

2. (Follow-up) What’s the secret of the power of collective reading? Compare the dynamic of the Dante Club to your own book club or reading group.

3. The death of Fanny Longfellow leads Henry Wadsworth Longfellow to take “refuge” in his translation of Dante. Discuss why Dante in particular seems to help him through his dark period. How is his sanctuary affected by the outbreak of violence from that same work of literature?

4. (Follow-up) Are there ways in which literature has provided a refuge in your own lives at difficult or confusing times?

5. In Dante’s Divine Comedy, Dante’s poetic idol Virgil leads him through the dangerous passages of the afterlife. In what ways do the characters of THE DANTE CLUB guide one other? Who would you say is the real leader?

6. How does the backdrop of the American Civil War influence the events of the novel?

7. Did you guess who the murderer was before it was revealed?

9. (Follow-up 2) What are the ways in which the author “misdirected” the reader from the murderer? Or, if you had correct suspicions, what tipped you off? In what ways were the murderer’s motives surprising? What do they reveal about the exploration of different types of “reading” that runs throughout the novel?

10. Discuss some of the instances in modern culture in which an artistic work — music, film or literature — seemed to have some impact on inspiring a crime. Some examples: Mark David Chapman carrying “The Catcher in the Rye” when he shot John Lennon; the Columbine killers supposedly drawing inspiration from Marilyn Manson songs and the video game “Doom”; several instances of people imitating “Natural Born Killers” in robberies and shootings. In that last instance, John Grisham led a campaign to prove Oliver Stone held responsibility after a friend of Grisham’s was killed. Is the work of art ever to blame? Do the murders in THE DANTE CLUB stem from the brutality of INFERNO?

11. (Follow-up) Should the Dante Club members have revealed the source of violence to the public? What was at stake besides their reputations?

12. Discuss Patrolman Nicholas Rey’s role in the challenges facing the Dante Club, with consideration for Rey’s status as a type of "exile" in Boston, and how this fits into the larger story.

13. Discuss the character of Dr. Oliver Wendell Holmes. Why does he emerge as the character in the novel with the heaviest burden? What elements of his personal background make the events of the story so disruptive and frightening to Holmes?

15. Take a look at the pictures of the characters in the “gallery” of THE DANTE CLUB website (www.thedanteclub.com). Do their appearances differ from how you imagined them?

From the Hardcover edition.
Learn More About The Dante Club
print

The Rule of Four
Dustin Thomason and Ian Caldwell

The Angel of Darkness: Book 2 of the Alienist
Caleb Carr

In the Garden of Spite
Camilla Bruce

The Scent of Secrets
Jane Thynne
Back to Top