A Day No Pigs Would Die Teacher’s Guide 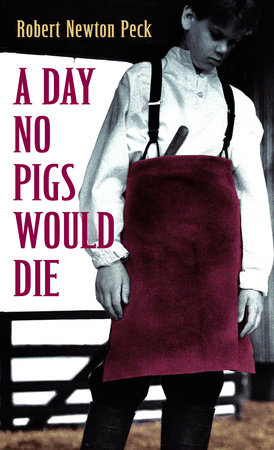 A Day No Pigs Would Die Teacher’s Guide

pdf
A Day No Pigs Would Die Teacher’s Guide

In this classic autobiographical novel set in the 1920s in rural Vermont, 12-year-old Robert Peck comes of age when his father dies and leaves him to manage the farm.

Robert Peck lives with his family in rural Vermont where his illiterate father makes a living killing pigs. Dedicated to hard work and plain living, Haven Peck rears his son according to strict Shaker laws. For this reason, Rob is an outsider at school, and often faces taunts and sneers from his schoolmates. Rob’s only friend is Pinky, a pig given to him by his neighbor, Mr. Tanner, as a thank you for saving his cow. Pinky turns out to be barren, and Rob’s dreams of raising pigs to help the family pay their farm debts are destroyed. Instead, he is forced to watch as his father butchers the pig. The ultimate death of Haven Peck makes Rob, according to Shaker law, the head of the household, and at 13 his journey to manhood is complete.

Robert Newton Peck was born in 1928 in rural Vermont where he spent his childhood working the family farm alongside his father, Haven Peck. Before becoming a writer, Peck worked as a lumberjack, hog butcher, and in a paper mill. A graduate of Rollins College, Peck’s first novel, A Day No Pigs Would Die, is based on the memories of his father and his Shaker upbringing. The author of the Soup books and Weeds in Bloom: Autobiography of an Ordinary Man, Robert Newton Peck has written more than 60 books. He lives in Florida.

Ask students to use books in the library or sites on the Internet to find out about the Shakers. Have the class construct a timeline that begins with Mother Ann Lee’s arrival in America in 1774 to the gradual decline of the Shaker societies.

FAMILY–Describe Robert’s relationship with his family. How is Haven Peck a role model to Robert? Discuss why Robert kisses his father’s bloody hand after he slaughters Pinky. According to Shaker tradition, Robert becomes the head of the family when his father dies. Explain how Robert’s mom and Aunt Carrie begin treating him as the head of the household immediately following Haven’s death. How does Robert prove that he is ready to take on the role?

FRIENDSHIP–Define friendship from Robert’s point of view. How is Pinky Robert’s best friend? At what point does Robert realize that Mr. Tanner is his friend? Why is Robert surprised when so many people show up for his father’s funeral? Describe Haven Peck’s kindness to others. How does the way he lived his life reflect the Shaker belief: “Thou shall love thy neighbor as thyself”?

ISOLATION–Discuss how Robert feels isolated from his peers and community. How does he deal with such isolation? In many ways, Robert has no childhood. Debate whether this contributes to his feelings of isolation. Discuss scenes in the novel when Robert expresses his desire to be like the other kids. How does going to the Rutland Fair with Mr. Tanner broaden Robert’s life? At what moment does he fully accept being an outsider?

COMING OF AGE–Trace Robert’s journey to manhood from the beginning of the novel to the end. How does he prove his manhood? Though Edward Thatcher is a minor character in the novel, he plays a large role in defining Robert’s character. Compare Robert’s coming of age to that of boys in his school like Edward Thatcher. Which of the boys can expect the longest journey?

DEATH–What is Haven Peck’s attitude toward death? Debate whether he knew that he was about to die. How does he prepare Robert for his death? After the funeral, Robert returns to his father’s grave before going to bed. What is the significance of this scene? How is the entire novel a celebration of life and death?

ACCEPTANCE–Discuss how the Shakers view other religions. Mr. Tanner and Aunt Matty are Baptists. How does Robert’s view of the Baptists change by the end of the novel? When Haven Peck dies, Robert’s hopes of continuing his education die. Discuss how Robert accepts his fate.

LANGUAGE ARTS–Read “The Mending Wall” by Robert Frost www.robertfrost.org/poem2.html). Ask students to write an essay that draws a comparison between the theme of the poem and Haven Peck’s views about fences (p. 19). Why is “Good Fences Make Good Neighbors” an appropriate title for the essay?

Robert delivers a very simple eulogy at Haven Peck’s funeral. Consider the beliefs of the Shakers, and write the eulogy that Robert might have given.

Aunt Matty attempts to help Robert improve his English. Select a paragraph from the novel and rewrite it in Standard English. How does the language change the flavor of the book?

SOCIAL STUDIES–Ask students to read about utopian societies in 18th and 19th century America. Why were the Shakers considered a utopian society? Write a comparison of the Shaker society to other utopian societies like Brook Farm, the Rappites, the Oneida Community, and the Amana Colonies. Students may wish to further explore how these early societies compare to communal living in the 20th century.

CONSUMER SCIENCE–The Shakers grew and used herbs for many purposes. Divide the class into small groups and ask them to take a look at the Sabbathday Lake Herb Catalog (www.shaker.lib.me.us/catalog.html). Assign each group several culinary herbs, and ask them to find out when the herbs are planted and harvested. Have the groups submit three recipes for each herb to be included in a class cookbook.

ART–The Shakers were known for their simple and utilitarian crafts. Ask students to use the internet or books in the library to find examples of Shaker crafts. Make a postcard that features one of the crafts. Include a short description of the item on the back of the postcard.

MUSIC–Singing was an important part of the Shaker religion. Though the very first songs written by the Shakers were wordless, they also wrote ballads, hymns, and anthems. Write a ballad that might be appropriate to sing at Haven Peck’s funeral.

A Day No Pigs Would Die has been the target of censors because of the graphic descriptions of the mating, births, and killing of farm animals. Ask students to take the side of the censor or the defender, and write a letter to the newspaper about the book’s place in the curriculum.

“With plenty of Yankee common sense and dry wit, and some pathos as the boy at 13 takes on the duties of a man. For boys of this age and for the young of any age.”–School Library Journal

Learn More About A Day No Pigs Would Die
pdf

The Smell of Other People’s Houses

Rules of the Road

Tunes for Bears to Dance To

Up a Road Slowly (DIGEST)

Hattie Ever After
Back to Top