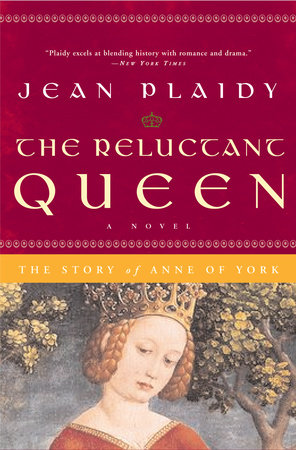 This guide is designed to help you direct your reading group’s discussion of The Reluctant Queen.

1. As a reader, what do you enjoy about historical novels like The Reluctant Queen? Does knowledge of history enhance your enjoyment of the story or detract from it?

2. Richard is perhaps most famous as the jealous hunchback who would be king in Shakespeare’s tragedy Richard III. Jean Plaidy depicts Richard as a loyal, loving subject of his brother the king. What impressions of Richard did you bring to your reading of this book?

3. At the beginning of The Reluctant Queen, Anne is on her deathbed thinking back over the course of her short life, realizing it was never really her own to live. Who or what truly controlled Anne’s destiny? On page 8, Anne says that in wealthy, powerful families like her own, where sons are heirs, even girls have their uses. What are they? How does Anne’s family use her and her sister, Isabel, to advance?

4. Anne’s father, the Earl of Warwick, is obsessed with power. He will do almost anything–including commit treason–to gain more. How does his attitude affect his daughters? His wife?

5. King Edward’s marriage to the beautiful Elizabeth Woodville is the catalyst for the events that bring about the Earl’s defeat. What steps does the earl take to seek revenge against the man he put on the throne? Why is he unsuccessful in his attempts to turn the people against Edward?

6. How does the discord between the king and her father affect Anne and Richard? What does Anne think of her father’s actions?

7. As part of his plans to wrest power from Edward, the earl arranges for Anne’s sister, Isabel, to marry the king’s brother George, Duke of Clarence, who wants the throne for himself. What was your first impression of George? Is he a good match for the ambitious but innocent Isabel?

8. As the rift between her husband and the king teeters on the edge of civil war, Anne’s mother shares her worries about the future with her younger daughter. What could a war between these powerful men mean for her and her daughters? Although she can’t control her husband’s actions, she will be held accountable along with him if he fails. Why? Is that fair?

9. The women of Warwick pay a high price for the earl’s lust for power. What happens to each of them? Do you think the earl ever considers them in his plans? The king offers peace and forgiveness to Warwick several times only to be rebuffed. Why? What does this say about Edward? About Warwick?

10. Anne is betrothed to the Lancastrian Prince Edward as a means of sealing a bargain between her father and the proud Margaret of Anjou. Arranged marriages for women of her status were common at the time, but Anne reacts badly to the news. Why? Imagine having your marriage arranged in such a manner. What does this practice imply about women?

11. When Anne is engaged to Edward, her mother-in-law-to-be is the formidable Margaret of Anjou. How did the events of her life shape the woman she is when Anne meets her? What was your first impression of her? How did your impression of her change as the book progressed?

12. How does Anne’s relationship with Margaret of Anjou evolve over time? Is she ultimately a woman to be pitied or admired?

14. After the loss at the Battle of Tewkesbury, Anne doesn’t know what will become of her, but it seems likely she will go from being the Princess of Wales to a prisoner in the Tower of London in one day. Do you think King Edward deals fairly with her? With her mother? With Margaret of Anjou?

15. Isabel seems perfectly willing to believe whatever her husband tells her–even when he insists that her mother stay in sanctuary for her own protection long after it is deemed necessary for her to do so. Is she a likable character? How does she ignore her husband’s faults?

16. When Anne and Richard are reunited upon her return to England, she learns that Richard has fathered two children by a mistress. How does she react? Is her reaction reasonable or naïve considering the standards of the times?

17. The Duke of Clarence is determined to block Anne’s marriage to his brother Richard. Why? What does he have to gain? Why won’t the king choose sides between his loyal brother Richard and the treacherous duke?

18. After being deceived and drugged, Anne wakes to find herself a prisoner in a cook shop in London. Although she demands to be let go, the shopkeepers and staff insist that she is a delusional maid called Nan and won’t let her leave. How does Anne remain sure of her true identity? What does she do to escape? How is the lecherous shopkeeper, Tom, the key to her rescue?

19. Once they are finally married, do Anne and Richard have a happy life together? Is marriage to Richard all she hoped it would be?

20. Richard asks Anne if he can bring his illegitimate children to be raised at Middleham, after their mother’s passing. What do you think of this request? Of her reaction? Is allowing these children into her home really a sign of unselfish love for her husband as her own mother suggests? Is Anne ultimately happy with her decision on this matter?

21. After the birth of her fourth child, Isabel dies. How does the news affect Anne? Both Anne and her sister were fragile women, but rumors sprout up that Isabel was poisoned. Do you think she was? If so, who is a likely culprit?

22. How does the sudden death of King Edward change Anne’s life? Richard’s?

23. Eventually, Richard discovers a secret in his brother’s past that challenges the legitimacy of Edward’s eldest son’s claim to the throne. What do you think of his actions after his discovery? What does Anne think of the change in her husband?

24. After little Edward’s death, Anne is plagued by feelings of inadequacy about herself. Her only son was sickly and Richard has no heir. Do you think Richard blames her for this? Is the young Elizabeth York a real or imagined rival for Richard’s affections?

25. Which of the powerful men in Anne’s life ultimately had the greatest effect on her fate? Considering everything that happened to her, do you think Anne felt content with her life at the time of her death?

The Lady Elizabeth
Alison Weir
Back to Top