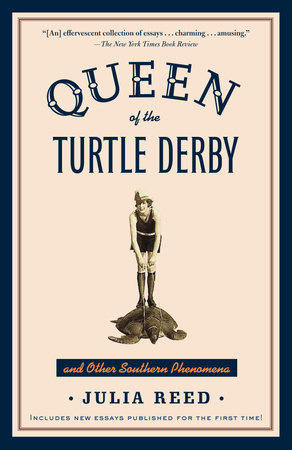 1. In her introduction, Reed says that when she returned to her native South in 1991, there was a theory in vogue that the region was losing its identity as a separate place. She says she found plenty of proof that the South’s identity is still firmly intact. Do her essays make a convincing case?

2. More than twenty years ago, John Egerton wrote The Americanization of Dixie. In the 2004 election, “NASCAR dads” comprised a sought-after voting bloc and “red” states placed an emphasis on family and religious values that are typically seen as Southern. Also, every Southern state voted red. Do you think that it is now possible to make the case that it is the rest of America that is being Southernized?

3. On the basis of Reed’s observations, would you say that politics and religion are more closely intertwined in the South than in other regions?

4. In “To Live and Die in Dixie,” Reed quotes Mississippi writer Willie Morris, who said, “It’s the juxtapositions that drive you crazy.” She points out that Southerners are the most violent people in the nation but also the most religious. What are some other examples of double standards found throughout the book?

5. In “American Beauty” and “Southern Fashion Explained,” Reed makes the case that women’s looks are largely defined by their region. Do you believe that? If so, how would you describe the “look” of the place where you live?

6. In “Miss Scarlett” Reed makes the case that Scarlett O’Hara was an early feminist. But she was also manipulative and used her beauty to get what she wanted. Have Southern women evolved from the Scarlett stereotype? In what ways do they still mimic Scarlett?

7. In one of the more memorable scenes from the film Gone with the Wind, Scarlett rips the silk curtains off the windows so that she can make a proper gown of them. On page 132 of “Miss Scarlett.” Reed writes that “Scarlett was Southern, she was a woman, she was going to keep up appearances.” Give examples found in the book of the importance of “keeping up appearances” to both male and female Southerners.

8. Reed writes affectionately and enthusiastically about what she obviously feels is the superiority of Southern cuisine. Discuss the larger importance of food in Southern culture.

9. Throughout the book there are examples of well-meaning people who could easily be the objects of laughter or scorn–the beauty queen who supplies the title of the book, for example, or the man who swears he’s grown closer to God since he found a cross-shaped sweet potato in his vegetable patch. Do you think Reed means to ridicule them, or does she succeed in painting an affectionate but clear-eyed portrait of the characters that populate her native land, despite their many foibles?

10. Reed gives several examples of Southerners’ proclivity toward socializing, whether it be at a funeral or a party thrown the day after a party just because there was some whiskey left (page 177). What factors do you think contribute to the more aggressively social part of Southerners’ natures?

11. Do you think that if Reed used the material in these essays to write a work of fiction, readers would have found it believable? Or are the stories included here a case of “truth is stranger than fiction”? Give examples of some of the more outlandish–but true–tales found in the book.

12. Is there anything else about the South you wish you knew and would you prefer to learn it from fiction or nonfiction?

13. If you know the South well, do you think Reed has given an accurate portrait of its peculiarities? Why or why not?