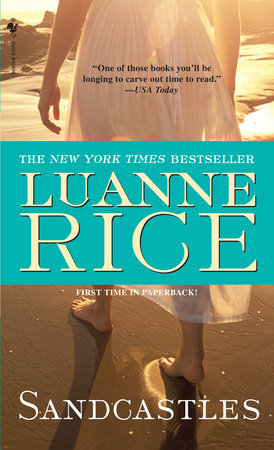 In this captivating family saga that sweeps from ancient Irish shores to a beautiful seaside community in Connecticut, New York Times bestselling author Luanne Rice invites us to explore the powerful tides of memory and love. Sandcastles is the story of artists Honor and John Sullivan and their three daughters, a family seemingly bound by deep-rooted loyalty–until one horrific night that leads to John’s imprisonment in the land of his ancestors. Years later, when John is at last released and slowly reacquaints with his family, rifts prove difficult to mend. It may take a miracle–or a whisper from years past–to restore elusive trust.

1. What were your impressions of Honor and John’s relationship in the initial scenes of Sandcastles? Throughout the novel, how did your perceptions of that violent night change?

2. Discuss the differences among the three Sullivan daughters. In what ways do Regis, Agnes, and Cecilia complement one another’s personalities? How do they each respond to the absence of their father?

3. What unites the settings in Sandcastles? In what ways do the magnificent coastlines reflect the events unfolding around them? What makes Star of the Sea an ideal locale for this family’s safe harbor?

4. How would you characterize Bernadette’s relationship with her relatives? How does her knowledge of the past affect their family ties?

5. What qualities make John a perfect hero? Is his temper a sign of his courage, or is it his greatest weakness?

6. Discuss the differences between John’s art and Honor’s. How do these differences reflect varying perceptions of the world? What powers do John and Honor ascribe to art?

7. What was your initial understanding of Agnes’s visions? What miracles were needed to heal her family?

8. Though he is not able to resolve his quest as soon as he had hoped, Brendan leads Bernadette to confront the truth. What does this aspect of the storyline illustrate about the nature of families, biological and otherwise?

9. What accounts for Regis’s attraction to Peter? Would she have married him if her father had not intervened?

10. In what ways is it fulfilling to connect with our ancestry, possibly even traveling to immigrant homelands? What is unique about the black Irish legacies portrayed in Sandcastles? How do those legacies shape the way the characters see themselves?

11. What were your theories about the scripture carved in the grotto? In the end, what did those verses signify for all who encountered them?

12. Why was it so difficult for Honor to let herself forgive John, while her daughters tended to defend him? In what ways had Honor stopped trusting him long before the night of Gregory White’s death?

13. Discuss the significance of the novel’s title. What fragile aspects of the Sullivans’ lives remain intact? Which aspects were inherently temporary, and perhaps even more beautiful because of their impermanence?

14. In what ways does Sandcastles enhance themes woven in other Luanne Rice novels you have read? What unique perspectives do the Sullivans give us regarding love and kinship?

The Way It Happens In Novels

The Night Before Thirty

Light of the Moon

Sleeping with Beauty
Back to Top