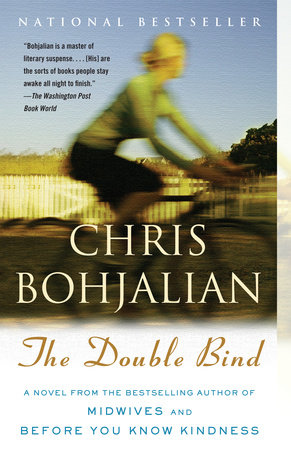 “Bohjalian is a master of literary suspense. . . . [His] are the sorts of books people stay awake all night to finish.” —The Washington Post Book World

The questions and discussion topics that follow are intended to enhance your group’s discussion of Chris Bohjalian’s The Double Bind.

When Laurel Estabrook is attacked while riding her bicycle through Vermont’s back roads, her life is forever changed. Formerly outgoing, Laurel withdraws into her photography, spending all her free time at a homeless shelter. There she meets Bobbie Crocker, a man with a history of mental illness and a box of photographs that he won’t let anyone see. When Bobbie dies, Laurel discovers a deeply hidden secret–a story that leads her far from her old life, and into a cat-and-mouse game with pursuers who claim they want to save her.

In a tale that travels between the Roaring Twenties and the twenty-first century, between Jay Gatsby’s Long Island and rural New England, bestselling author Chris Bohjalian has written his most extraordinary novel yet.

1. Chris Bohjalian begins the novel with a very matter-of-fact description of a brutal attack. Later in the novel, he writes about Laurel, “She preferred black and white [photography] because she thought it offered both greater clarity and deeper insight into her subjects. In her opinion, you understood a person better in black and white” [p. 37]. Compare Laurel’s analysis of photography to the writing style of the author, particularly in the prologue.

2. Bohjalian introduces the world of The Great Gatsby seamlessly into his characters’ lives, and Fitzgerald’s themes resonate deeply within The Double Bind: the death of the American Dream, repeating the past, and self-reinvention, to name a few. Discuss how each author (Fitzgerald and Bohjalian) explores these themes, and examine any others that stood out for you.

3. In a feat of narrative turnaround, The Double Bind ends with a shocking revelation. Did you find yourself reviewing the novel or rereading it to experience it anew? Did you find the treatment of F. Scott Fitzgerald’s characters to be more or less significant in light of the revelation?

4. Discuss Bohjalian’s treatment of homelessness, both as a reality and as an abstraction or social issue. Did The Double Bind change your thoughts and views on the plight of the homeless in America? If so, how?

5. Why did Laurel, as the author writes, allow Talia to “remain a part of her life when she had consciously exiled herself from the rest of the herd” [p. 134]?

6. We learn from Bohjalian that the phrase “double bind” is a psychiatric term for a “particular brand of bad parenting [that] could inadvertently spawn schizophrenia” [p. 215]. What else, in light of Laurel’s history, might the title of the book refer to?

7. Is Laurel’s imagined life for Bobbie—and all his psychiatric problems—a way for her to express her own psychotic break? Is the Bobbie Crocker that the reader gets to know really a facet of Laurel’s personality?

8. Through most of the book the reader believes, along with Laurel, that she escaped certain rape-and that her ability to hold on to her bike saved her. But after the attack, she gives up biking. Discuss the play between the conscious and subconscious mind—a delicate balance that must have underlined all of Laurel’s actions—in this abandonment of the very thing she’d convinced herself was her savior.

9. In what ways is Dan Corbett’s tattoo of the devil as a skull with horns reminiscent of the billboard of the pair of eyes that overlooks the Valley of Ashes in The Great Gatsby? Is there other imagery in the novel that echoes Fitzgerald’s tropes?

10. “For the first time, [Katherine] began to wonder if she’d made a serious mistake when she’d given Laurel that box of old photos” [p. 150]. Were the photos the catalyst for Laurel’s downfall? Would Laurel have eventually suffered a similar psychological breakdown without the introduction of the photos?

11. How was Laurel able to block out what really happened to her when she carried real physical scars of the mutilation to remind her of it? Were there clues in the narrative that part of her did know what happened all along?

12. Laurel suffered a horrendous attack and managed to go on to do great work for the most neglected members of society. Does her breakdown have a negating effect on the seemingly heroic work that came before it? Why or why not?

Chris Bohjalian is the celebrated author of ten novels, including Midwives, an Oprah Book Club selection and the New York Times bestseller Before You Know Kindness. He writes a weekly column for the Burlington Free Press and lives with his wife and daughter in Lincoln, VT.

How Quickly She Disappears

A Ladder to the Sky
Back to Top