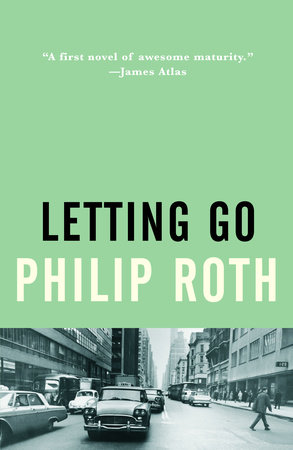 Letting Go is Philip Roth’s first full-length novel, published just after Goodbye, Columbus, when he was twenty-nine. Set in 1950s Chicago, New York, and Iowa City, Letting Go is a brilliant fictional portrait of a mid-century America defined by social and ethical constraints and moral compulsions conspicuously different from those of today.

Newly discharged from the Korean War, reeling from his mother’s recent death Gabe Wallach is drawn to Paul Herz, a fellow graduate student in literature, and to Libby, Paul’s moody, intense wife. Gabe’s desire to be connected to the ordered “world of feeling” that he finds in books is first tested vicariously by the anarchy of the Herzes’ struggles with responsible adulthood and then by his own eager love affairs. Driven by the desire to live seriously and act generously, Gabe meets an impassable test in the person of Martha Reganhart, a spirited, outspoken, divorced mother of two, a formidable woman who, according to critic James Atlas, is masterfully portrayed with “depth and resonance.” The complex liaison between Gabe and Martha and Gabe’s moral enthusiasm for the trials of others are at the heart of this tragically comic work.

The questions, discussion topics, and other material that follow are intended to enhance your group’s conversation of Letting Go.

1. The novel begins and ends with letters, and throughout we see correspondence that reveals the characters’ emotions and thoughts that aren’t expressed in other interactions. What is it about this form of communication that allows for such honesty to come forth? How would the book be different if some of those feelings were said aloud?

2. Aside from our protagonist, Gabe Wallach, did anyone else stand out to you as having an equally important role in the nexus of characters, or whose personality demanded your attention?

3. Although the book is set prior to the Roe v. Wade decision that legalized abortion, Paul and Libby’s experience with abortion suggests the complexities that echo contemporary discourse and politics in the twenty-first century. How might their situation have turned out differently if the book was set in the 1980s, the 2000s, or post-2022?

4. Between Gabe and Martha, and Paul and Libby, is there a couple in the book whose relationship feels genuinely satisfying and authentic? What circumstances bring them together, and what threatens to break them up? What qualities do the characters draw upon to sustain themselves through these trials?

5. In the background of the novel is the world of academia and literature, which Gabe and Paul dwell in professionally. Where do you see the influence of a writerly world, or a writer’s mindset, in the book? Where are the walls between the characters, narrator(s), and author?

6. How are the burgeoning developments of modern psychology depicted in the novel, in its events, and the writing itself?

7. How did you interpret the emphasis on Thanksgiving and other Americana traditions, customs, and values in the novel? What tensions and insecurities does the holiday unearth for the characters, especially Martha?

8. What does Gabe’s illness while he stays with Martha establish in terms of the tone and quality of their relationship? Do they prove capable of being with each other in normal circumstances?

9. Although the characters don’t strongly identify with religion, its importance wanes and waxes over the course of the novel; Libby says, “But first something basic and sustaining, something to make them truly ready for, deserving of a baby; something warm, sacred, worthwhile: traditions and ceremonies, holy days and holidays and customs . . .” (353). Do Paul and Libby wind up finding this source of stability? What in the end makes them “ready for” the arrival of their daughter?

10. Discuss the role of women in the novel, socially and professionally, in the realms of mental and physical health, domestic responsibilities, creativity and scholarship, and the various expressions of motherhood. Are the men of the book, including the author, fully able to access and understand their desires and motives? How does this compare to contemporary fiction written by women?

11. Gabe acts as a pseudo-father in many moments of the book—with Cynthia and Markie, but also with Rachel to a degree, as he ushers her to the Herzes. How does his own relationship with his father reflect how he behaves in these situations? Consider Gabe’s thought: “But would he understand that I was not prepared to surrender my life to his? He was a wholehearted man, and such people are hard to kiss half-heartedly” (39). What does this suggest about the responsibilities parents and children have to each other throughout their lives?

12. Discuss Paul’s encounter with death at the cemetery at his father’s funeral in which he realizes: “There were several choices open to Paul that moment; it was not because all the paths of escape were blocked that, instead of moving out, he moved it. He could have run away, or simply walked away, but he moved in because in was the direction of his life . . . and what he saw next was his life—he saw it for the sacrifice that it was” (450–51). How do his choices and attitudes before and after this moment inform what he deems to be a “sacrifice” in his life? What and to whom is he sacrificing, and does he do so willingly or out of obligation?

13. What is the impact of Cynthia’s accident that resulted in Markie’s death on the rest of the novel? How did you understand her experience of this as a child, and what does the glimpse we get into her psychology reveal about the capacities (or incapacities) of the adults? How responsible do you think she is?

14. What did you think of how Gabe treats Theresa at the hospital when her baby is born, and later as he interacts with her husband? What is his role as interlocutor on the adoption, logistically and emotionally?

15. Discuss the moment between Gabe and Rachel at the end of part six, where he holds her close and thinks “He clutched her to himself as though she were It was though the child embraced the man, not the man the child” (601). What does the fight for her, on behalf of his friends, bring up for Gabe? What do you make of this being the last time we see him in the novel?

Learn More About This BookRabbit, Run by John Updike

The Childhood of Jesus by J. M. Coetzee

Rabbit Redux
Back to Top