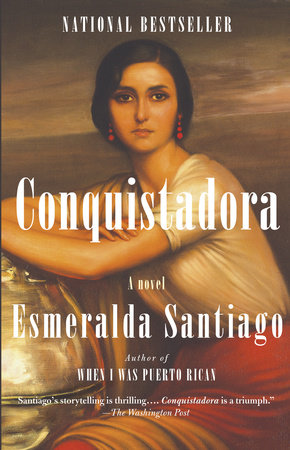 The questions, discussion topics, and reading list that follow are intended to enhance your reading group’s discussion of Conquistadora, Esmeralda Santiago’s brilliantly realized epic of love, discovery, and adventure in nineteenth-century Puerto Rico—dubbed by Booklist “a book-group must.”

“Santiago brings passion, color, and historical detail to this Puerto Rican Gone With the Wind, featuring a hard-as-nails heroine more devoted to her plantation than to any of the men in her life . . . Santiago makes Caribbean history come alive through characters as human as they are iconic. The richness of her imagination and the lushness of her language will serve saga enthusiasts well, and she provides readers a massive panorama of plantation life—plus all you could ever want to know and more about growing sugar cane.” —Publishers Weekly

A stunning, gorgeously told novel by the best-selling author of When I Was Puerto Rican.

Even as a young girl in nineteenth-century Spain, Ana Larragoity Cubillas is drawn to the exotic island of Puerto Rico by the diaries of an ancestor who traveled there with the conquistador Ponce de León. And in twin brothers Ramón and Inocente—both in love with Ana—she finds a way to get there: she marries Ramón and convinces the brothers that their destiny is in the remote sugar plantation they’ve inherited on the island.

But Ana’s fantasies haven’t prepared her for the unrelenting heat, the dangers of the untamed countryside, and the slave labor on which life at Hacienda los Gemelos depends. And when the Civil War breaks out in the United States, Ana finds her livelihood, and perhaps even her life, threatened by the very people on whose backs her wealth has been built: the hacienda’s slaves, whose richly drawn stories unfold alongside her own. And though at last Ana falls for a man who may be her destiny—a once-forbidden love—she will sacrifice nearly everything to keep hold of the land that has become her true home.

A sensual, riveting tale—thrilling history told through the story of an indomitable, unforgettable woman.

1. Santiago’s epigraph is an excerpt from “Adam” by William Carlos Williams: “Underneath the whisperings/of tropic nights/there is a darker whispering/that death invents especially/for northern men/whom the tropics/ have come to hold.” Why do you think she chose this passage?

2. How familiar were you with the history Santiago provides in the opening section of the novel—El Encuentro/The Encounter: November 19, 1493?

3. Santiago’s first book was the best-selling memoir When I Was Puerto Rican, which told an entirely different sort of history: that of her own journey from Puerto Rico to the United States. Yet Conquistadora also makes the personal historical. How do fact and fiction play off each other in this story? How is reading historical fiction different from reading a nonfiction historical account of a time period?

4. As the book begins, how do you feel about Ana? Is she a likable character? What one word would you use to describe her?

5. What draws Ana to Puerto Rico? What opportunities exist for her there—as a woman of a certain class, a señorita de buena familia—that weren’t available in Spain? What about Severo? What brings him to Puerto Rico, and what is he able to accomplish there that might have been impossible in Spain?

6. How does Ana’s attitude toward slavery, and her own slaves, change over the course of the novel? How does she change in general and why?

7. Discuss Ana’s relationship with Elena. What draws these women together—and what drives them apart? How do their motivations for getting married differ?

8. Why do you think Ana agrees to sleep with both Ramón and Inocente? Does she have a choice in the matter?

9. On page 73, Ana considers a phrase: “We are all a bit of a poet, a bit of a musician, a bit mad, she agreed. But she thought that Severo Fuentes, who could quote Cervantes with uncanny precision, was perhaps the maddest of them all.” Do you agree with Ana about Severo? Why or why not? How are “madness” and a sense of mission linked for Severo, and for Ana?

10. Why does Los Gemelos become so important to Ana? Why won’t she leave—and why would she be willing to go so far as to trade her son for the plantation? Did you understand her motivation for this? Why or why not?

12. Discuss the characters of Conciencia and Meri and their relationships with Ana. How does Conciencia function as a conscience for Ana? Why does Ana feel that she must save Meri from her burns? And why do you think Ana is able to act maternally toward her slaves in some ways, but is unable to be a mother to her own son?

13. Why does Severo want Ana as his wife, although it is Consuelo who makes him happy? Do you think he can love these two women at once?

14. What is the significance of the house Severo builds for Ana? Why does he name it El Destino?

15. On page 319, Santiago tells us that, three generations later, Miguel’s paintings would wind up stored in a warehouse and forgotten. How do you think this connects to the larger story of Puerto Rican history, and Ana’s endeavors at Hacienda los Gemelos?

16. Discuss Miguel’s fate. What do you think he would have said to Ana, had he had the chance?

17. As the novel ends, the American Civil War has already begun to change life in Puerto Rico—perhaps especially for the hacienda’s slaves, who are inspired by “el libertador Abrámlincon.” How is the history of slavery in Puerto Rico similar to, or different from, the history of slavery in America? What surprised you most about Santiago’s depiction of the slaves’ daily lives?

18. How does Conquistadora compare to other postcolonial literature you’ve read—stories that take place in Africa, Asia, and the Americas?

19. Does Ana earn the designation conquistadora? If she were alive today, what do you think she would do for a living?

20. What do you think lies ahead for Ana and Severo? What about Segundo, who will inherit their land and the hacienda? And the slaves at the hacienda?

Esmeralda Santiago is the author of the memoirs When I Was Puerto Rican, Almost a Woman, which she adapted into a film for PBS’s Masterpiece Theatre, and The Turkish Lover; the novel América’s Dream; and a children’s book, A Doll for Navidades.  Her work has appeared in The New York Times, The Boston Globe, and House & Garden, among other publications, and on NPR’s All Things Considered and Morning Edition. Born in San Juan, Puerto Rico, she currently lives in New York.

The Map of Love

To the End of the Land
Back to Top