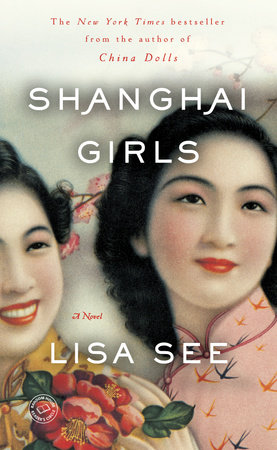 1. Pearl’s narration is unique because of its level, calm tone throughout— even when the events she describes are horrific. One is reminded of Wordsworth’s reference to “emotion recollected in tranquility.” It is almost as if Pearl is writing in a diary. What was Lisa See trying to accomplish in setting up this counterpoint between her tone and her narrative?

2. Pearl is a Dragon and May is a Sheep. Do you think the two sisters, in their actions in the novel, are true to their birth signs?

3. Which sister is smarter? Which is more beautiful?

4. Each sister believes that her parents loved the other sister more. Who is right about this? Why?

5. Pearl says that parents die, husbands and children can leave, but sisters are for life. Does that end up being true for Pearl? If you have a sister, to what extent does the relationship between Pearl and May speak to your own experience? What’s the difference between a relationship that’s “just like sisters” and a relationship between real sisters? Is there anything your sister could do that would cause an irreparable breach?

6. Z.G. talks about ai kuo, the love for your country, and ai jen, the emotion you feel for the person you love. How do these ideas play out in the novel?

7. Shanghai Girls makes a powerful statement about the mistreatment of Chinese immigrants in the United States. Were you surprised about any of the details in the novel related to this theme?

8. How would you describe the relationship between Pearl and May? How does the fact that both are, in a sense, Joy’s mother affect their relationship? Who loves Joy more and how does she show it?

9. Pearl doesn’t come to mother-love easily or naturally. At what point does she begin to claim Joy as her own? How, where, and why does she continue to struggle with the challenges of being a mother? Do you think this is an accurate portrayal of motherhood?

10. There are times when it seems like outside forces conspire against Pearl—leaving China, working in the restaurant, not finding a job after the war, and taking care of Vern. How much of what happens to Pearl is a product of her own choices?

11. Pearl’s attitude toward men and the world in general is influenced by what happened to her in the shack outside Shanghai. To what extent does she find her way to healing by the end of the novel? Did your attitude toward Old Man Louie change? How do you feel about Sam and his relationship with Pearl and Joy? Did your impression of him change as the novel progressed?

13. Speaking of Yen-yen, Pearl notes: “When we’re packing, Yen-yen says she’s tired. She sits down on the couch in the main room and dies” (p. 246). Why does Pearl describe Yen-yen’s death in such an abrupt way?

14. After Joy points out the differences in the way Z.G. painted her mother and aunt in the Communist propaganda posters, May says, “Everything always returns to the beginning” (p. 267). Pearl has her idea of what May meant, but what do you think May really meant? And what is Pearl’s understanding of this saying at the end of the novel?

15. Near the end of Shanghai Girls, May argues that Pearl and Sam have withdrawn into a world of fear and isolation, not taking advantage of the opportunities open to them. Do you agree with May that much of Pearl’s sadness and isolation is self-imposed? Why or why not?

16. How do clothes define Pearl and May in different parts of the story? How do the sisters use clothes to manipulate others?

17. How does food serve as a gateway to memory in the novel? How does it illustrate culture and tradition both in the novel and in your own family?

18. What influence—if any—do Mama’s beliefs have on Pearl? How do they evolve over time?

19. Pearl encounters a lot of racism, but she also holds many racist views herself. Is she a product of her time? Do her attitudes change during the course of the story?

20. What role does place—Shanghai, Angel Island, China City, and Chinatown—serve in the novel? What do you think Lisa See was trying to say about “home”?

Songs of Willow Frost
Back to Top