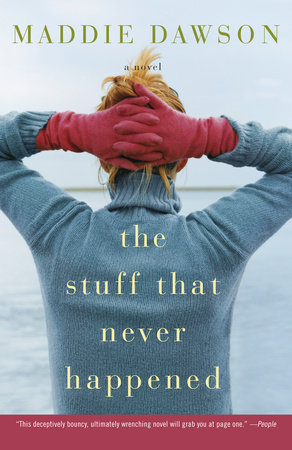 In order to provide reading groups with the most informed and thought-provoking questions possible, it is necessary to reveal important aspects of the plot of this novel—as well as the ending. If you have not finished reading The Stuff That Never Happened, we suggest that you wait before reviewing this guide.

1. Annabelle and Grant McKay got married during the late 1970s at a time when society was in upheaval. Even Annabelle’s mother tells her that marriage is a bad deal for women, and accuses Annabelle of getting married just to rebel against her. Annabelle insists she’s marrying Grant because she’s in love with him. Do you think Annabelle and Grant were in love with each other? How did their respective upbringings lead them to expect different things from marriage? What was it about Grant that drew Annabelle to him? And why would Grant have wanted Annabelle to marry him?

2. If Grant and Annabelle had not moved into the home of Jeremiah and Carly when they relocated to California, but instead had lived on their own, do you think their marriage would have had more of a chance of surviving those early years? Why? What other factors might have contributed to their separation?

3. When Annabelle starts her affair with Jeremiah, she is scared and reluctant. How does she justify it to herself? What is it about him that makes the affair almost inevitable?

4. Do you think that Jeremiah ever really intended to leave Carly and his children and go off with Annabelle? What actually prevented him from doing this? Would Jeremiah and Annabelle have been happy together?

5. Why does Annabelle want to get back together with Grant? What has she learned about herself and about him that makes this reunion possible?

6. Annabelle readily agrees to Grant’s terms for reuniting, making a pact that they will never speak of her affair or those unhappy years again, and that this new reunion will mark the true beginning of their marriage. Should she have had misgivings about this from the start? Would such a pact be possible for most people? Why does it seem to suit Grant?

7. When Grant and Annabelle were raising their children in New Hampshire, they were happy, with a steady stream of friends and responsibilities and plenty to keep them occupied. It’s after the children leave that Grant throws himself back to his work, saying he needs to make up for lost time in his career. Annabelle sees this as abandonment. Is she being unreasonable? In what ways did her infidelity hold Grant back in his career? Do you think he is punishing her for that?

8. The Wednesday morning appointment for sex: Grant says this is necessary so that they make sure to have time for each other, while Annabelle sees it as evidence of a lack of spontaneity in their relationship. How does this symbolize everything that is wrong between them? How do their different personality types affect their happiness and expectations of each other?

9. This book is as much about mother-daughter relationships as about marriages. Annabelle’s mother, Edie, confides too much in her daughter and makes her uncomfortable. Annabelle keeps secrets from Sophie and doesn’t tell her about her problems with Grant. How does Sophie see her parents’ marriage? Does her idealization of their marriage make her have unrealistic expectations about her own? How frank should mothers be in talking with their daughters about their own mistakes?

10. Do you think that Sophie and Whit have a good marriage? Was he wrong to go away during her pregnancy? Do you think he will return?

11. When Annabelle sees Jeremiah again in New York, should she have ignored him and refused to meet him for coffee? What do you think she was hoping to understand from seeing him again? And what did she learn about those early years? Had she been deluded to ever love him—or was he the real love of her life?


12. Middle-aged marriages often start to unravel after kids leave home, after what seems to outsiders like happy years—or happy-enough years—raising children and making a life together. What do we owe to our families once they are raised and grown, especially if we’re not getting the nourishment we need in our own lives?

13. Did Annabelle come to the right decision at the end of the book? What changes can she make to create the life she wants?
Learn More About The Stuff That Never Happened
print

Outtakes from a Marriage
Ann Leary

The One That Got Away
Bethany Chase

The Myth of You and Me
Leah Stewart

The Last Summer (of You and Me)
Ann Brashares

Talk Before Sleep
Elizabeth Berg
Back to Top