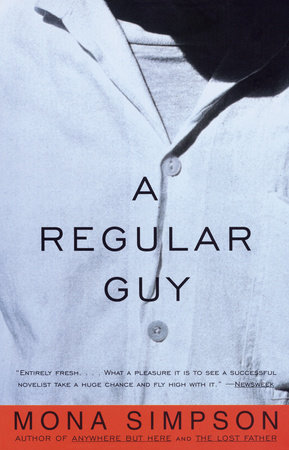 The questions, discussion topics, and author biography that follow are designed to enhance your group’s reading of Mona Simpson’s novel A Regular Guy. We hope that they will provide you with new ways of looking at a novel produced by an American realist hailed by critics as one of her generation’s finest writers. With this work, Mona Simpson shows herself to be a sensitive and incisive analyst of the broken family, with an uncommon insight into the child who is at the mercy of parents who are absent, restless, narcissistic, dishonest or emotionally unstable. While it engages serious contemporary social issues, this work also makes for compulsive and deeply enjoyable reading, with characters who absorb our attention and involve us completely in their world.

Tom Owens is an ex-hippie entrepreneur whose biotechnology firm, Genesis, has made him a multi-millionaire while still a young man. Jane is the daughter he has never met because when she was conceived he was synthesizing the protein that was to make his fortune. When his nineteen-year-old girlfriend Mary told him she was pregnant, he replied, "I can’t have a baby now, Mare. . . . I’ve just started something." [p. 13] Ten years later, poor and unable to cope with her daughter alone, Mary decides to send Jane to her father. She teaches Jane how to drive, specially adapting their truck so that Jane can reach the gas pedal, brake, and steering wheel. The ragged girl, having driven all through the night, is found outside Owens’s mansion by his friend Noah Kaskie, who takes up Jane’s cause with her father. While Owens is reluctant to admit that Jane is his daughter, he sends for Mary and sets them up in a cottage near his home on a paltry allowance of three hundred dollars a month.

Gradually Jane insinuates her way into Tom’s life, though she and her mother remain at the mercy of his odd ideas and his blindness to the needs of those around him. The novel presents us with an array of other characters whose lives circle around Owens–Noah, the brilliant biologist confined to a wheelchair, whose strongest desire is to be loved; Olivia, Tom’s beautiful and long-suffering girlfriend; Julie, the lawyer whose true desire is for the domestic life. These and others create the world that Jane inhabits as she tries to find her way into her father’s heart. Their interconnected lives create the web of a deeply satisfying novel that explores the relationship between such central life issues as love, community, ambition, and money.

1. "The most terrible and wondrous experience in Jane di Natali’s life was over by the time she was ten, before she’d truly mastered the art of riding a bicycle" [p. 28]. With these words Simpson concludes her description of Jane’s nighttime journey west from the Sierras in a battered truck. What is wondrous and what is terrible about this passage out of childhood? Why does Mary decide that it’s time to send Jane to her father, and why do you suppose she does it in this way?

2. A Regular Guy is the first of Mona Simpson’s novels to be narrated entirely in the third person. Does this mode of narration have the effect of giving you equal access to the interior lives of various characters? Who is the novel’s central character? Which of the characters do you most care about, feel closest to? Is your empathy with some characters and not others an effect of the mode of narration, or of some other aspect of Simpson’s technique?

3. In his speech at the teachers’ convention, Owens claims that "People being related biologically is irrelevant. What matters is if you like ’em." [p. 111] Why, then, is he anxious about whether Jane looks like him? Would he have accepted Jane as his daughter if she weren’t attractive, bright, and healthy? Do you believe that he is capable of loving?

4. Two abortions take place during the course of the novel: Mary aborts the child she has conceived with Eli because Jane expresses some negative feelings about having a sibling, and Olivia aborts the child she has conceived with Owens because Owens is ambivalent about marrying her. What issues do these two abortions raise in Jane’s life? Why are they important to the concerns of the novel as a whole? Why does Mary put Jane in the position of deciding the fate of her and Eli’s unborn child?

5. What is the relationship between ambition, success, and love in A Regular Guy? Does the choice of either love or ambition tend to be different for the women and the men in the novel?

6. Owens’s loss of status seems to turn his focus to simpler things: love, children, gardening. Is Owens, after his fall, a more likable character? Do you think his newfound devotion to family is authentic? Is Simpson inviting us to conclude that the domestic, private life is inherently of more value than the public life?

7. Tom Owens has a number of strong opinions about how society should be run, and he seriously considers running for political office. Do you think he would have been a successful politician? Or president? Which of his beliefs derive from his hippie past, and which seem to contradict the ideals of the sixties? Is there a coherent philosophy behind his various beliefs? If not, how do you interpret this aspect of his character?

8. Simpson juxtaposes the rise of Noah Kaskie with the fall of Tom Owens, and from the beginning of the novel seems to set up the two men as a study in contrast. In what other character juxtapositions are we invited to reflect upon and compare aspects of personality and various approaches to life?

9. Jane takes her father’s name at the end of the novel and seems to be finally and securely accepted by him. What kinds of changes has Jane gone through? Does she come to resemble her father’s character more than her mother’s?

10. Asked about her motivation as a writer, Simpson answered: "I hope to reach the readers who read the way I read, passionately and with much yearning and abandon, readers ardently questioning how they should live, both personally and in a larger context of community and world-wide community, and who find the context for their questioning to be books and the process of reading." (Quoted in Contemporary Literary Criticism, vol. 44, p. 103.) Such issues are clearly being examined in this novel: how does your reading of it affect the way you think about what you value in your life, and how to achieve the right kind of life?

The Grief of Others

The One That I Want

I’m Glad About You
Back to Top