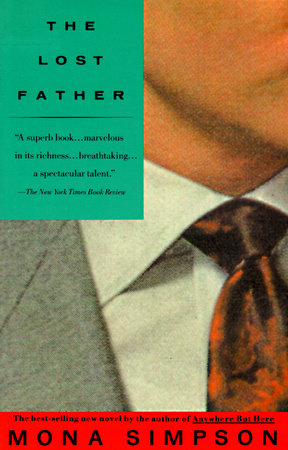 The questions, discussion topics, and author biography that follow are designed to enhance your group’s reading of Mona Simpson’s novel The Lost Father. We hope that they will provide you with new ways of looking at a novel produced by an American realist hailed by critics as one of her generation’s finest writers. With this work, Mona Simpson shows herself to be a sensitive and incisive analyst of the broken family, with an uncommon insight into the child who is at the mercy of parents who are absent, restless, narcissistic, dishonest or emotionally unstable. While it engages serious contemporary social issues, this work also makes for compulsive and deeply enjoyable reading, with characters who absorb our attention and involve us completely in their world.

In The Lost Father Mona Simpson again takes up the story of Ann August, who has begun calling herself Mayan, the name her Egyptian father gave her. Now age twenty-eight and a medical student in New York City, Mayan gives in to her lifelong desire to find her father, feeling that her life can’t continue meaningfully until she arrives at some understanding of why her father left and never bothered to make any contact with her. Mayan knows that her father is probably not worth finding, but this knowledge somehow doesn’t matter. In the course of what becomes a grueling odyssey toward a long imagined reunion, she hires a detective, spends all of her savings, drops out of medical school, stops eating, and nearly loses her mind. The last time she saw her father she was only twelve; he called out to her as they drove away, "Don’t forget I am your father. Nobody else can ever be that" [p. 138]. But it’s possible to be a father and yet not be one. And like Dorothy on the road to Oz, Mayan doesn’t know yet that the authority she seeks in her lost father can only be found within herself.

In a beautifully rendered novel that examines the consequences of abandoning children as well as the psychology of obsession and female dependency, Mona Simpson has created a heroine who is wry, self-deprecating and intelligent–whose troubles are utterly absorbing, whose journey becomes our journey.

1. In one of The Lost Father‘s most striking aphorisms, Mayan says, "All you have to do to be somebody’s God is disappear" [p. 38]. What psychological truth do you find in this statement? How does this sentence encapsulate the concerns and meanings of Mayan’s life?

2. Although this book is a sequel to Anywhere But Here, Mona Simpson says that she had not intended to write one. The germ of The Lost Father emerged one afternoon while she was at work on another novel: "I started writing a story about someone looking for her father, and it kind of took over. It was a surprise to me." Only later did it become clear to Simpson that the narrator was the girl from Anywhere But Here. (From interview with Susannah Hunnewell, The New York Times Book Review, 9 February 1992, p. 10.) Is The Lost Father nonetheless complete in itself? How are the two books different from each other? What are some of the differences in the way that Adele and Ann-Mayan are portrayed? What are the most important shifts in emphasis?

3. The Lost Father is a brilliant study of obsession and of a life hopelessly in its grip. Why does Mayan have to do what she is doing, despite its outwardly self-destructive aspects? Why does she say that not even the most terrible discovery about her father could make her give up? Does she expect that finding her father will be an ending or a beginning?

4. In what ways does Mayan behave as a woman who believes herself to be unlovable? What does the novel tell us about the particular role a father plays in shaping a daughter’s self-esteem and identity?

5. Mai linn, Emily Briggs, and Mayan are three young women who have been friends since childhood, and their upbringings contrast greatly with each other. Mai linn is an orphan who was sexually abused by her foster father; Emily is the adored daughter of a rich father; and Mayan, of course, is the neglected daughter of an unknown father. What does Simpson accomplish by juxtaposing Mai linn, Emily, and Mayan as three very different kinds of daughters?

6. What role do solitary, eccentric people play in Mayan’s life–people like Emory, whom she befriends in the hospital, or the old Chinese man who lives upstairs from her? Why do you think that Mayan is at her best with people who are alone, like herself?

7. What does Mayan learn about her father at Firth Adams College? Why isn’t she discouraged by this information? Do you think she would have done better to stop at this point? Why does the box in the back of her car make her feel that she is finally doing what she was always meant to do, that "Still, away from it all, I felt I was living my one true life" [p. 265]?

8. In Egypt, while searching for her father’s family, Mayan finds an Egyptian lover. Why is this relationship necessary for her? Why does she ignore his letters once she returns home?

9. One of this novel’s most brilliant aspects is its examination of the damage done by people who evade their responsibilities. As an adult herself, Mayan observes, "We are all endlessly telling the explanations of why we are not more. At a certain age, this begins. And for my mother and father, the explanation was still, after all these years, the other’s name" [p. 468]. Is her father as self-deluding as her mother? Are you surprised that he doesn’t seem to notice that he has done Mayan great harm?

10. Mayan’s friends–Mai linn, Emily, Stevie, Jordan–all are engaged in some aspect of Mayan’s quest and try to help her in whatever ways they can. Is Simpson calling attention to a contrast between these loving friends and Mayan’s uncaring father? Would you argue that the novel ultimately places more value on friendship than on family? What is the relation between the two?

11. What sort of a person is John Atassi? In what sense is he "lost"? How does he strike you, after all you’ve learned about him prior to his appearance in the novel? Why has he stayed with Uta as long as he has? What does Mayan learn from this seemingly anticlimactic completion of her quest? What does she mean when she says, "Maybe all searches end the same. You are changed forever but not by what you were looking for" [p. 431]?

12. The Lost Father seems to draw upon elements of a variety of narrative genres–the coming-of-age novel, the psychological case study, the road novel, detective fiction, etc. How would you categorize it? Can you think of other novels that it is indebted to or similar to?

Promise the Moon
Back to Top