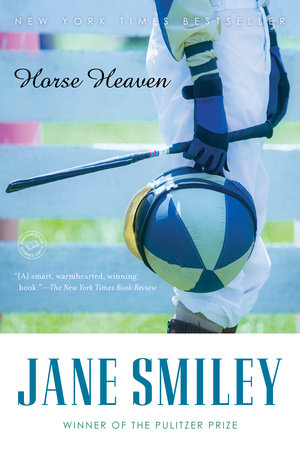 1. Introducing her work as a "comic epic poem in prose," Ms. Smiley warns her readers that the characters and events in Horse Heaven are no more than "figments of the author’s imaginings," and that "their characteristics as represented bear no relation to real life." Discuss the levels of irony in her remark. Also, how does the description of genre fit or mislead?

2. Most characters in Horse Heaven are struggling with the issue of identity. What makes the matter more pressing for some than for others? What approaches frustrate or facilitate attempts at clarity? How is the issue different for the horses than for the humans? What role do places and other beings play as a character tries to navigate the world within?

3. Ms. Smiley plays with many modes of humor throughout Horse Heaven, from slapstick to the absurd to keen satire. Provide examples of each. How do they blend into one another? Are there moments of gallows humor? If not, why? To what use does Ms. Smiley put her comedic turns? How much do they
color the novel?

4. What cherished American myths does Horse Heaven satirize, if not debunk? Which myths does it uphold? Does Ms. Smiley tell a distinctly American story as well as one capable of resonating elsewhere? If so, what allows her subject to transcend place and time?

5. Ms. Smiley has discussed the primacy of the individual in the world of horse racing, yet her novel is replete with relationships of every sort. Discuss the connection that exists between the social and private realms. How does one shape and define the other? What themes surface in exploring the connection
between the two?

6. Fate and fortuity are opposing forces in Horse Heaven. Which characters choose to see themselves as players in a destiny authored by some mysterious other? Which see the exercise of their individual will as the shaping force in their lives? How do self-deception and honesty factor into each perspective?
Explain how the ways and world of horses shed light on these matters.

7. What motivates characters such as Farley Jones and Buddy Crawford to turn to religion? How does their work express or contradict their beliefs? Where else does religion surface in the novel? Should the benevolent force apparently at work throughout the novel be construed in religious terms?

8. Explain how desire operates as a persistent, enigmatic force throughout Horse Heaven. Which characters bow to it, and which manage to control it? Is there more joy in the wanting or the receiving? Does Oscar Wilde’s quip about the tragedy of getting what one wants apply? How and to whom?

9. Ms. Smiley has celebrated the racetrack as a storyteller’s paradise. Which characters prove most adept at spinning fact into fiction? How do they use that talent? What motivates the mythologizing and romanticizing of horses—and some humans—that takes place throughout the novel? What is it about
the world of horses that makes possible, if not credible, such an array of tall tales?

10. Ms. Smiley has stressed the need for novelists to engage readers by imaginatively explicating the social, cultural, economic, and political reality of a particular moment. What is the significance of her choice of historical moment in Horse Heaven? What themes are amplified in Ms. Smiley’s handling of the years 1997 through 1999? Where do the worlds of horses and politics meet? How do race and gender factor into the novel? Does the world of horses offer a complete and complex microcosm? If not, what’s missing?

11. After describing thoroughbreds as exuberant and sensitive creatures of many opinions and a deep intelligence, the omniscient narrator informs us that they have "too much of every lively quality rather than too little." How do characters such as Epic Steam and Residual live up to this description?

12. Discuss the arc of Justa Bob’s life. Who are his literary forerunners? How does Ms. Smiley’s handling of the character achieve pathos while avoiding bathos?

13. Which points outlined in Farley’s "The Tibetan Book of Thoroughbred Training" are validated by the novel’s close? Which prove wanting? How would you amend the list to capture the spirit of Horse Heaven?

14. How does Ms. Smiley’s careful chronicling of the ins and outs of horse breeding and training, compare with our insoluble debates about the roles of genetics and environment in shaping who we are? Do you believe that nature or nurture has the upperhand in defining a horse? A human? Why?

15. Ms. Smiley has encouraged those readers overwhelmed by the array and number of characters simply to keep an eye on the horses. Thus, time with the novel evokes time at the racetrack. How else does the structure of the novel complement its content? Provide examples.

16. One is tempted to credit much of the drama in Horse Heaven to coincidence, yet the intricacies of the plot suggest something else. What does Ms. Smiley’s chronicling of many individuals’ wills in conflict say about that which we often lazily call luck?

17. Many have lauded the complexity and pluck of Ms. Smiley’s horses by comparing them to humans. Do her horses maintain their, well, horseness, or are they—through an act of anthropomorphism—transformed into creatures defined by human fears, desires, frustrations, etcetera? Discuss the dynamic relationship between horses and humans.

18. Find and discuss the passages in Horse Heaven where you see Ms. Smiley working in the grand tradition of the novel’s heyday—the middle of the nineteenth century. Can you detect the influence of Dickens, Trollope, or Balzac? Where? To what other writers and literary traditions does Ms. Smiley tip her hat? How is Horse Heaven a novel of our time and of another?

Jane Smiley is the author of nine previous works of fiction, including The Age of Grief, The Greenlanders, Ordinary Love & Good Will, A Thousand Acres (for which she was awarded the Pulitzer Prize), and Moo. She lives in northern California.
Learn More About Horse Heaven
print

The Other Side of the Bridge

We Are All Welcome Here

Mary Coin
Back to Top