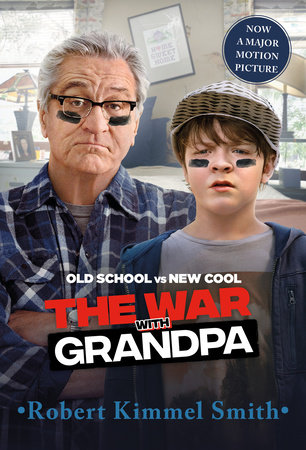 When 10-year-old Peter Stokes finds out that his newly widowed grandfather is coming to live with the family, he is glad because he really likes his grandfather. However, when he discovers that the plan is for his grandfather to take the room that Peter has had all his life, he declares it unfair. At the urging of his two best friends, Peter declares war on his grandfather to recover his rightful property. Family love is not destroyed, but attacks and counterattacks escalate until Peter finally surrenders–or does he win?

Family and Relationships — Peter’s parents made the decision to give Peter’s room to Grandpa before they told Peter and Jenny that he was coming to live with them. How did that make Peter feel? Grandpa thought that there should have been a family conference. He and Peter solved the problem, and then had to convince Peter’s parents to agree. Brainstorm with the class ways in which families can avoid conflicts, solve problems, and make decisions. Ask students if they could use these ways to solve differences with their friends as well.

Family and Relationships (Intergenerational) — Not too long ago, it was common for grandparents to stay in their children’s homes when they could no longer live alone. Ask students if any of them have grandparents living in their homes. (Some students may live with their grandparents.) Discuss with students what the advantages of having another generation in the home might be and what challenges this might present. Make a chart with their answers and ask them what families can do to ease any problem situations.

Peer Pressure — Peter, Billy, and Steve had been best friends since kindergarten. They visited in each other’s homes, played board games, and got along in spite of their differences. Ask students to what degree they think Peter was influenced by his friends to start the war with Grandpa. When might Peter have given up his campaign if not for their encouragement? Ask the students if they have ever felt pressured by their friends to do things they aren’t sure they should do? How can they resist these pressures and still maintain their friendships? When are friendships not worth saving in these instances?

Language Arts–In chapter three, Peter describes his room. Ask students to read it again carefully. Ask students what it tells about him. What does he like to do? What is important to him? Have students write a description of their own rooms or a favorite room in their house. What does this room tell about its occupant(s)?

Throughout the book, the author develops Peter’s character, showing him to have conflicting emotions. He loves his grandfather, but he will play mean tricks on him to get his room back. Have the students find as many examples of this as they can (pp. 33 and 34, 59, 66, 75, 99). Discuss character development with the students. Let them share how this makes the reader feel about Peter and Grandpa.

The solution to the problem in The War With Grandpa is that Peter does get his room back, with Grandpa’s help. However, there is another solution to a problem presented at the beginning of the book, which relates more closely to Grandpa. Discuss the revival of Grandpa’s spirit, and Peter’s part in it.

Throughout the book, Robert Kimmel Smith uses figurative language; for example, "cried like a maniac" (p.16), "mad as a wet hairnet" (p. 26), "springing up like a weed" "(p. 31), "mean as Darth Vader" (p. 75), "solid as the Rock of Gibraltar" (p. 91), and "looked like asterisks" (p. 96). Point out one or two of these similes to the students and challenge them to find as many as they can. Have the class discuss their findings and explain how these descriptions add imagery to the story.

Art –– It is very important that illustrators show the events that happen in a story as the author describes them. Have the students look at Richard Lauter’s illustrations in this book. Have students draw their own depictions of what the artist drew, for example on page 82 Peter’s bedroom.

Math — Peter Stokes had lived in the same house all his life. Many people move one or more times while they are growing up. Record how many students were born in your town, how many have moved once, twice, etc. Make a bar graph of the results. Or use the scale on a map to figure students’ moves "as the crow flies." Make a bar graph of the distances from zero to the highest number.

Science — In chapter 27, Grandpa takes Peter on his first fishing trip. Grandpa explains that they must get up early because the best time to catch fish is when they come to feed at high tide. Have the students research "tide" in a print and/or an electronic encyclopedia, and in an almanac. What place in the world has the greatest difference between high and low tide. If you live near the shore, check your local newspaper for tide listings and discuss current tide tables.

Assign two or three chapters throughout the book to individual students to practice reading at home. Have those students read their chapters onto an audiotape. Place the tape of the whole book in the classroom listening center with the book. All the students can enjoy the book before discussion begins.

"Peter tells his story with honesty and humor…. By the story’s end, Peter has learned much about the causes and effects of war–and human dignity."–School Library Journal

"The humor of the story derives from Peter’s first-person account and from the reader’s recognition of Peter’s valiant effort to maintain two mutually exclusive emotions."–The Horn Book

Using The War with Grandpa in the Classroom

The War with Grandpa offers an engaging story as well as an opportunity for interdisciplinary connections in language arts, science, social studies, math, and art. It will tie in with any family unit as well as providing discussion starters for the prominent themes of the book: solving family problems, resisting peer pressure, and understanding an older relative’s point of view.

The Man Who Loved Clowns

Otherwise Known as Sheila the Great

Al Capone Does My Homework

Mick Harte Was Here
Back to Top